Sanchez+Coleman Studio puts some sizzle into a formerly humdrum condo. 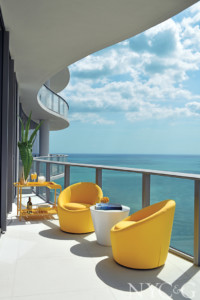 Sometimes a little change can go a long way. Three years ago, interior designer Christopher Coleman and his longtime partner, Venezuelan architect-turned-fashion-designer Angel Sanchez, traded in the chaos of New York City for a more laid-back life in Miami. The couple set up shop in a small building north of Miami’s Design District, the first floor dedicated to Sanchez’s evening wear and bridal lines, and the second to their newly established interiors business. (Coleman ran his own firm for 25 years in New York before persuading Sanchez to get back to his architecture roots and join forces with him.)

“We started collaborating after some of my fashion clients bought apartments and hired Chris to decorate them,” explains Sanchez. “I never thought I’d go back to architecture, but I fell in love with it all over again.” Coleman, who describes his design philosophy as “modern, colorful, and bold, with a sense of humor and whimsy,” never takes any job too seriously.

Coleman’s penchant for fun comes full circle in this wildly vibrant condo in Miami’s Sunny Isles. The clients, a couple with two teenagers, hired him and Sanchez to revamp their new 3,000-square-foot three-bedroom abode after attending a dinner party at an apartment the pair had designed. And while this water-view unit was impressive, it needed work if its interiors were to be as impactful as the expansive ocean vistas from its three terraces.

The first task: adding interest and dimension to the main living space—a basic white box—by rebuilding the walls to give them a faceted 3-D effect. “The clients wanted something clean, so we changed up the architecture and made the walls large works of art,” says Sanchez. “We took the idea of angles and ran with it,” Coleman adds, “starting with the walls and repeating the theme in the rugs, the living room sofa, the dining table, and the kitchen island.”

The architectural concept didn’t come without its challenges, though. “The angles gobbled up a lot of space,” explains Coleman. “Usually, furnishings anchor a wall, but in this case, all of them had to float. We also had to figure out how to install appliances in an oddly shaped kitchen island and hang a TV on an irregular wall.” 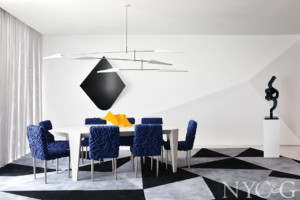 A single color story energizes the entire residence. “Everything in Miami tends to be decorated white,” says Coleman, a primary-colors proponent who devised a vivid scheme of bright blue and yellow playing off black and white. (The decorator loves wall coverings, but realized that they wouldn’t work on the living room’s faceted walls.) Contemporary artworks in the same tones add to the drama, from a motorized blue circle by Manuel Merida (it rotates on a back-painted glass wall in the kitchen) to the black acrylic-on-fiberglass wall sculpture by Matthew Hawtin in the dining area to Kazumi Yoshida’s white painted-wood piece in the master bedroom. Now art-filled and artful, this formerly ordinary apartment has suddenly become a masterwork of its own.

A print version of this article appeared in the December/January 2020 issue of NYC&G (New York Cottages & Gardens) with the headline: Sunny Forecast.