The winners from the CT IDAs Interior Design category.

Even before Charlotte Barnes uncovered walls that were uninsulated and found roofs that leaked, she discovered something else while redoing a 19th-century Fairfield County carriage house as her new home. “The biggest challenge in redoing the house and in furnishing all the rooms was the fact that I was the client,” notes Barnes. “I can walk into anyone’s house and see immediately what needs to be done, but I discovered that I was my own most demanding client.” What has resulted, though, is, as Barnes says, “a brand new 1800s carriage house.”

The dwelling’s historic nature and detailing appealed to her and her husband—but figuring out how to configure its old unconventional layout into fresh livable spaces required planning. In what was essentially a gutting, Barnes added a fireplace downstairs in the main living area, and she created a primary suite upstairs with his/hers dressing rooms, as well with two ancillary bedrooms. Because this house was the answer to downsizing, she was able to respond to her dream: “To surround myself with all my very favorite things—fabrics, furnishings, objects, artworks, whatever I’ve always wanted.” 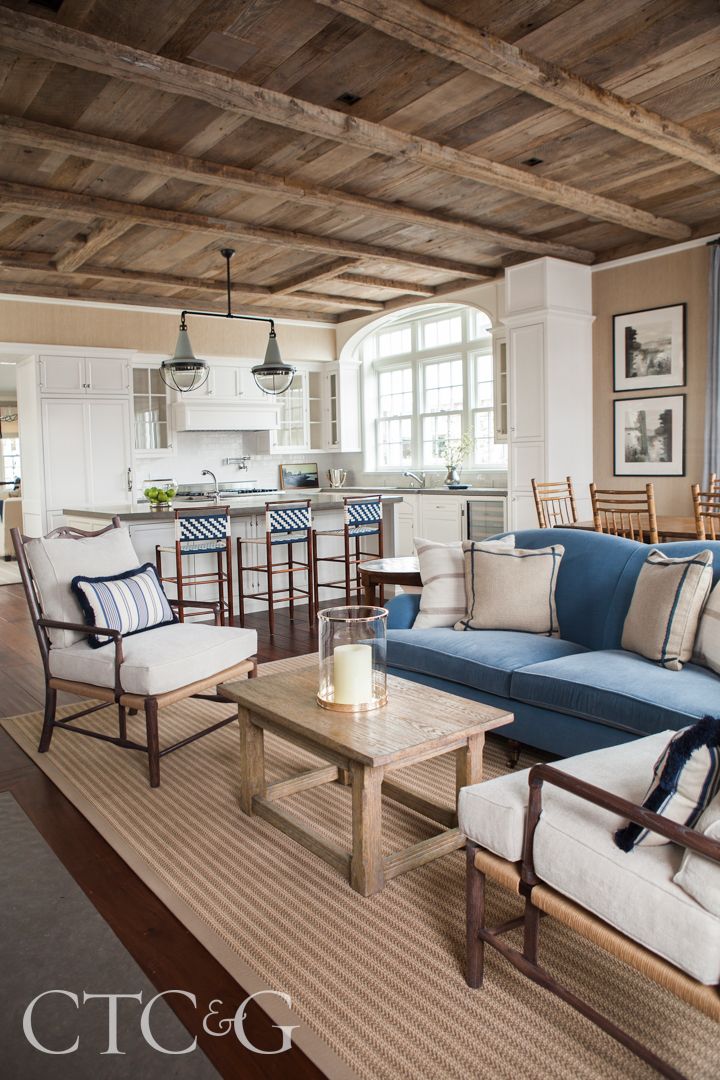 The rooms of this shingle-style house feel very tailored, and for a good reason. The client wanted the rooms to have a bespoke masculine feel to them, so Susan Bednar Long responded by choosing textiles, colors and patterns typical of a man’s wardrobe. Stripes, tattersall plaids, windowpane prints, checks, seersucker and crisp solid linens accented with elegant piping work their way through the interiors in subtle but striking ways. A grasscloth wallpaper, for instance, in the great room evokes the texture of a nubby linen sports jacket, while the living room draperies reference the pinstripes on a pair of suit pants.

The rooms are furnished with classic American pieces, with a long rustic pew-style bench occupying the entry landing, as a way to announce the style found throughout the home. Shaker-style stools, in a blue and white pattern, are positioned at the kitchen island while antique spindle-back chairs are set at the dining table. While one might characterize the interiors as embodying a quintessential Connecticut style, everything about the interiors is original and inviting. 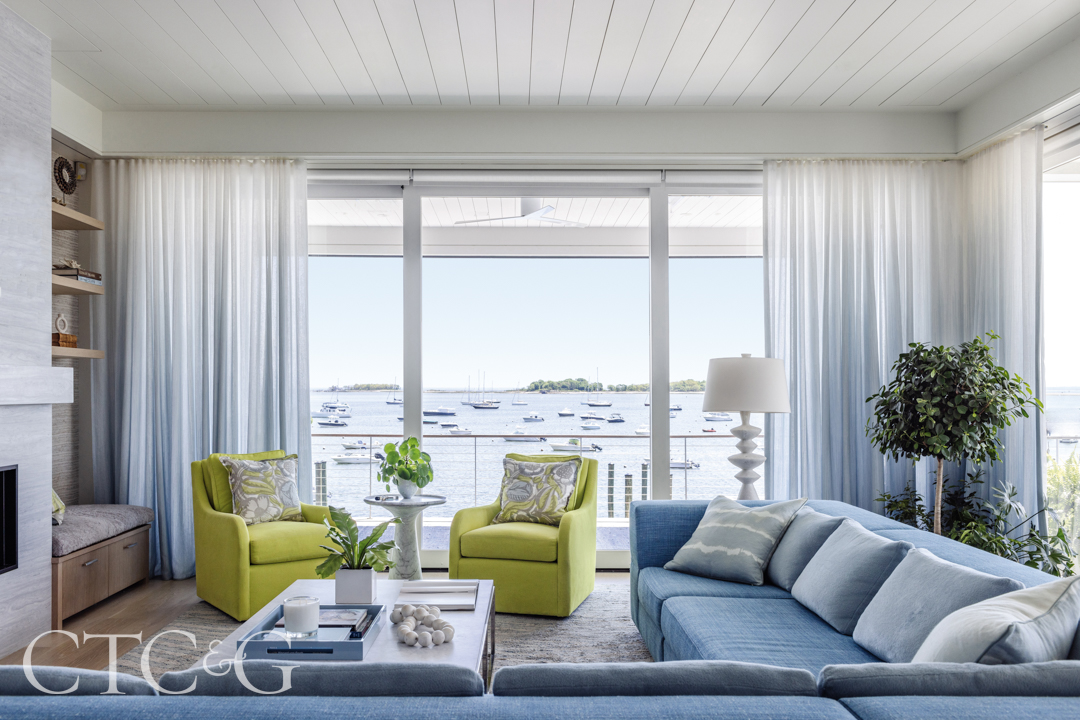 While the waters of Wilson Cove in Rowayton provide a serene blue setting for this house, the homeowner wanted the interiors to reference her favorite flower: the blue hydrangea. To make sure such shades, as well as the living flower itself, would blossom, so to speak, Havilande Whitcomb embraced a largely monochromatic color scheme, with the blues of the flower appearing throughout. 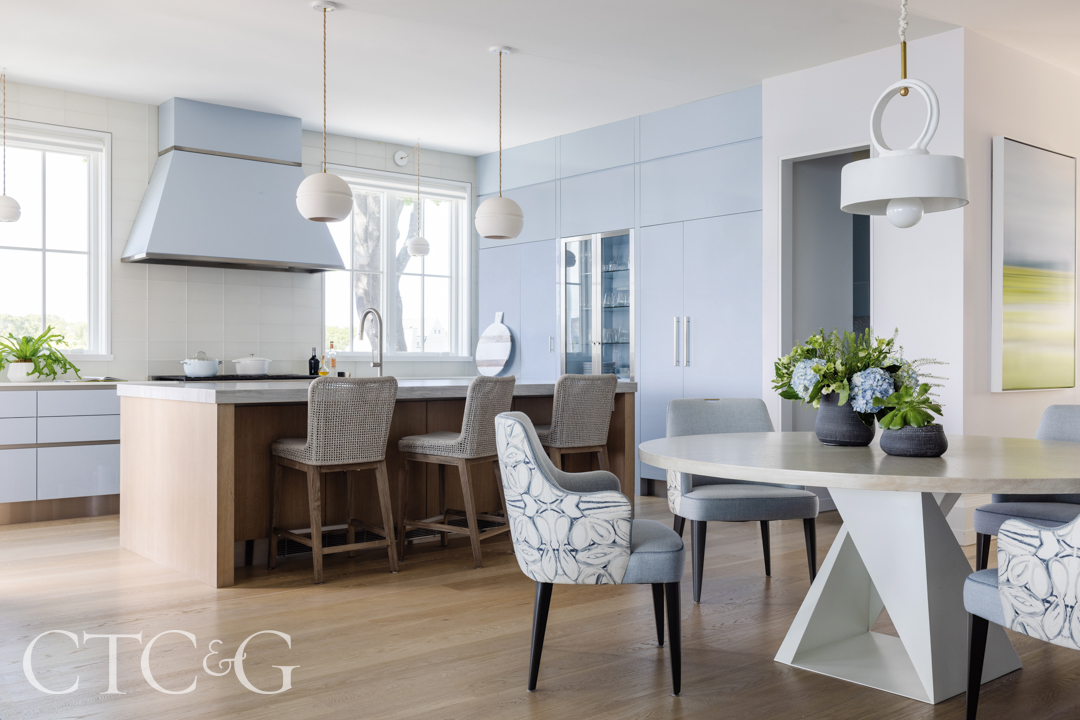 Given the narrow site and the resulting narrow structure, the house is arranged so that rooms sequence from front to back, with the core of the main floor occupied by the kitchen. Because one can essentially see through the house, the designers were careful to customize furnishings that never interfered with the water vista, both in terms of their heights and placements in rooms.

The primary suite, situated at the front of an upper story, is a private, serene oasis, with a high, pitched ceiling and a clerestory window that brings in extra sunlight and moonlight. Although this was meant to represent a new downsized life for the homeowners, cherished objects and heirlooms were preserved to add a layer of age and character to the rooms.

This article appears in the December 2022 issue of CTC&G (Connecticut Cottages & Gardens).

Sinatra built this rustic compound in 1970, and before it lists next month, it will open to the public for the first time as part of Palm Springs Modernism Week.