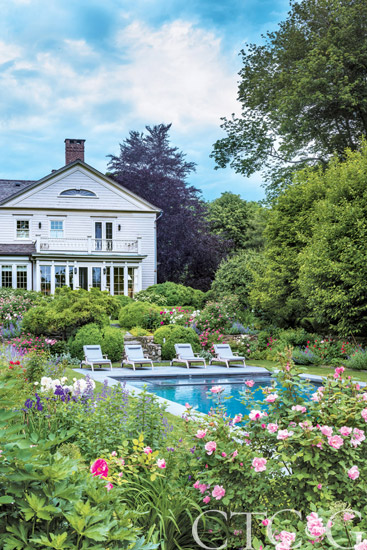 Seven years ago, Casey and Chuck Berg purchased Turkey Hill in Westport. There are certain specific, unavoidable issues involved with taking ownership of—without a doubt—the most-photographed garden in the universe. Simply put, no one wants to be the person who killed Martha’s garden.

Everybody knows Turkey Hill. Over three decades, plot by plot, Turkey Hill onion farm had been transformed by the Queen of All Good Things garden diva Martha Stewart into a bustling, bucolic estate with perennial gardens, orchards, chickens and a greenhouse. Every season, every planting decision over every inch of the property was explained and lovingly filmed for television programs, magazines and books devoured by millions. Buying that hallowed four acres and turning it into something truly of one’s own proved to be a tremendous responsibility.

But Casey Berg did it—with a little help from some very talented friends. “I knew what we were taking on,” says Casey. “Anyone who steps on the property is mesmerized. It’s a special place. The highest point on Turkey Hill is stunning, jaw-dropping.”

“I’m glad at the time I didn’t know what it would take,” says husband Chuck. But he has no regrets. He especially treasures the mature trees on the property, noting one spectacular beech planted by Martha almost 40 years before. When a storm threatens, Chuck crosses his fingers, “We could never re-create this in our lifetime.” 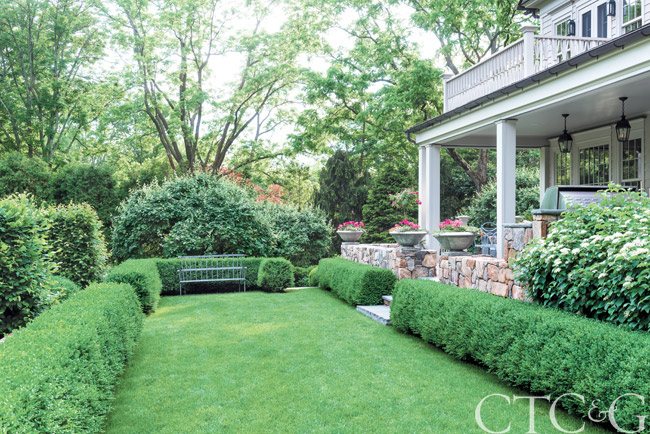 Believe it or not, at the beginning, the estate was not the perfect setting one might have envisioned. Martha had moved out several years before. Four other parties interested in purchasing the estate were planning to create subdivisions. Certain plants were taking over in the garden. “Some editing had to be done,” says Casey, “and parts of the estate were almost agricultural,” with a large kitchen garden, orchards and berry bushes far exceeding the needs of her family. They had bought Turkey Hill just as their youngest was going off to college.

Casey admits to being nervous. She called upon landscape architect Chris Kusske, of Kolkowitz/Kusske Architects, who had worked on her brother’s home, to help. “Chris was the man for the job,” says Casey. “‘Trust me,’ he said, ‘it will feel the same but cleaner. The abundance and beauty will remain.’ And that’s just what happened.” 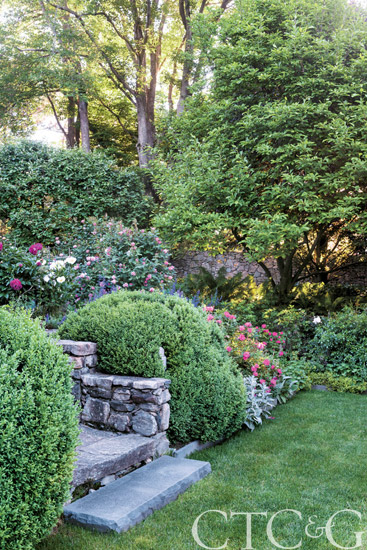 The original farm was developed by Martha to support a thriving catering business. In her latter years on the property, the Turkey Hill house and garden became Exhibit A for Martha’s vast media empire, with wonderful individual elements, but not conceived of as a unified whole.

An addition connecting the house to the former studios (now garage) created a new entrance, which Kusske emphasized with a hornbeam alleé leading down the hill to the swimming pool. Magnolias were grouped by the pool; quince trees—favorites of both Martha and Casey—were brought up to new terraces by the house.

Chris Kusske’s vision for Turkey Hill was to give the Bergs room to breath while imposing a little more structure overall. Perennial beds next to the house were replaced with quiet green terraces bordered by boxwoods. (The plants were replanted in a lower plot at Turkey Hill, and divisions are donated annually to the Westport Garden Club plant sale.)

Through all of this, the constant at Turkey Hill has been head gardener Levy Froes, now 71, who worked for Martha for 20 years before signing on with the Bergs seven years ago. “He is the heart and soul of the place,” says Casey. Levy’s favorite part of the garden? “All of it,” he says. “I care about it because this is my legacy.”

“The garden is a labor of love for all of us,” says Casey. “It’s like a big art project. All the time and effort put in is worth it.” And, yes, Martha has visited to see how things are going. “It was 30 years of her mastery that created Turkey Hill,” notes Casey. “She left us a wealth of beauty, but we made it better.”

A version of this article appeared in the May 2014 issue of Connecticut Cottages & Gardens with the headline: CEven More of a Good Thing.