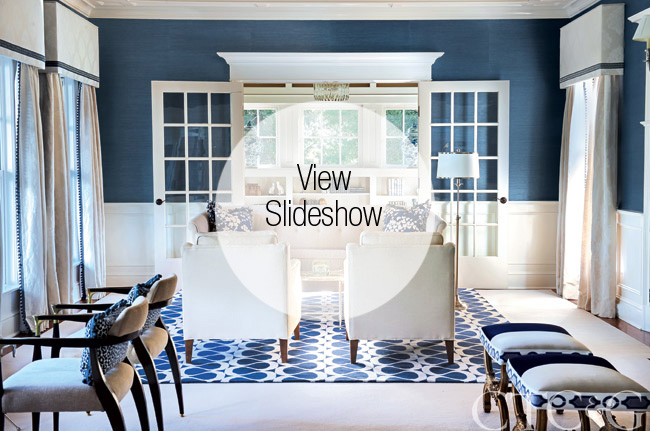 When designer Beth Schoenherr first met the owners of this New Canaan shingle-style residence built by Country Club Homes, the mandate was clear: “They bought the house in the spring, and they wanted to be in by summer,” she recalls. With just a few clues to work with—some pages from a magazine, for instance—Schoenherr viewed the directive as a challenge and an opportunity. “I took the bull by the horns,” she says. “As a designer, one of my greatest joys is to figure out what a client wants to live in.”

Set in the Oenoke section of town, the home was originally built in 2008. When the Manhattan-based couple bought it in 2012 as a weekend house, it was still in good shape. “It just needed a makeover,” says Schoenherr. “We painted everything, cleaned up the trim and changed out all the hardware.” The goal was to integrate the wife’s love of French antiques and more modern pieces into a cohesive whole. “That type of design usually evolves over time,” Schoenherr explains. Working on such a tight schedule meant there was little room for missteps. “At one point, I had all three of my rug guys working at the same time,” she recalls with a laugh.

For their next meeting, the designer had developed a floor plan for the entire house, including selections for fabrics, furnishings and lighting. “When we did a walk-through with my storyboards, she kept saying, yes, yes, yes,” Schoenherr recalls.

Then, about six weeks into the project, the couple went to Paris to shop for antiques. The next thing Schoenherr knew, a semi container filled with lighting fixtures, paintings, statues, mirrors, benches, armoires and more was sitting in the driveway. “It was like Christmas,” she says. The designer managed to find a home for everything, including two heavy marble Greek statues that sit on the lawn just outside the family room. All of the lighting fixtures were rewired, and the antique upholstered pieces were updated with more contemporary fabrics and trim.

The jumping-off spot for the interiors was a spectacular hand-screened orange and brown Arena wallpaper that the homeowner wanted in the dining room. “It’s the one traditionally formal room in the house,” says Schoenherr. The brown (more coffee with cream) lacquered trim adds to the overall richness, as does the handmade gold leaf ceiling and antique Murano glass chandelier—one of the Paris finds.

Playing off the wallpaper, the dining room rug weaves in a palette of blues, taupes and gray, which runs through to the family room, as well as orange and brown, which appear again in the breakfast room. “We didn’t want orange in every room,” says Schoenherr. “But we did want splashes of it as an accent color.” Here, an orange, navy and cream fabric cornice adds a whimsical note, as does the orange and navy Jessica Charles chairs. The designer introduced a touch of drama by painting the octagonal ceiling a high-gloss jet black. “It’s like glass,” says Schoenherr, “so shiny and clean looking.”

The spacious living room is large enough for two separate sitting areas, pulled together with a sumptuous navy Phillip Jeffries grasscloth wall covering. A custom curved settee covered in an Osborne & Little fabric and a pair of 1920s chairs anchor one end of the room; a linen sofa and matching club chairs anchor the other. The room’s classic color scheme carries over into the library, with its high-gloss navy ceiling and cream lacquered built-ins.

By contrast, the family room, done in pale blues and grays, strikes a more relaxed pose. A Natasha Law portrait of the couple’s children holds center stage above the hearth. Overall, the end result is exactly what the homeowners envisioned: an inviting weekend retreat, formal but not stuffy, with a crisp, sophisticated feel.

“With a three-month time frame, it was a jump-off-and-trust-each-other situation,” Schoenherr recalls. “Now, when I look at the house, I know: This is absolutely her.”

A version of this article appeared in the October 2015 issue of Connecticut Cottages & Gardens with the headline: Weekend Update.