At her Hamptons getaway, Katie Couric calls on her landscape-architect sister to open up the house to nature. Plus, view our exclusive image gallery.

Curb Appeal | Clara Couric Batchelor improved the front entry to her sister Katie Couric’s Hamptons home by repositioning the driveway and adding a series of stepping stones. The sisters in the living room (right); all sweaters are by Magaschoni

Like most people, Katie Couric was drawn to the Hamptons for its magical countryside, glorious light, greenery and incomparable beaches. She already owned a country house in Millbrook, New York, which she had purchased many years ago with her husband, Jay Monahan, who died in 1998, but she realized it was time for a change. “I decided that I’m really a beach person and would go to a house in the Hamptons much more often, especially since I have lots of great friends there,” says Couric, who also envisioned a home where her close-knit family could gather easily and often. “I wanted something casual and relaxed—something without a lot of trees. I didn’t want to be deep in the woods.” Couric also wanted a house that didn’t require a lot of upkeep. “I would be in the house primarily on the weekends, and I’m not exactly Bob Vila!”

So Couric, who has just completed a five-year run as the anchor and managing editor of the CBS Evening News, asked her real-estate-broker friend Charlie Esposito to take her house-hunting. They had seen only two houses when Couric spotted a flyer on the backseat of the car with a picture of a house that looked very much like the one she had visualized. “It was a traditional built about 14 years ago,” says Couric. “The rooms were spacious and had lots of sun, and as soon as I walked in I could picture my family being there. Its proximity to town was convenient for my daughters, and it was close enough to the ocean, on a pretty street that wasn’t very busy. It met all the requirements.”

Shore Things | Blue and white, one of Couric’s favorite color combos, anchors the dining room (left), which comfortably fits large groups of family and friends. The shell mirror above the fireplace was created by Couric’s friend Laurie Kittle. Point of View | The enticing view toward the house (right), blanketed by wisteria and hydrangeas.

Even better, the house was in excellent condition; Couric didn’t have to do much more than paint and replace a few doorknobs (the interiors are comfortable and unfussy, thanks to her casual, unrushed collaboration over the past few years with decorator Eric Hughes). The landscaping, however, proved to be a sizable challenge. 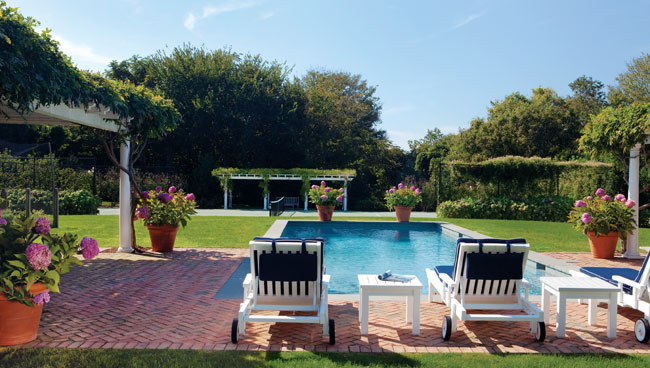 Point of View | By removing an old white picket fence and overgrown hydrangeas, plus repositioning a linden tree in a side yard, Batchelor created an unobstructed view from the living room: across the lawn, to the pool and tennis court and the pergola beyond.

Enter Couric’s sister Clara Couric Batchelor, a Harvard-educated, award-winning landscape architect who owns CBA Landscape Architects in suburban Somerville and Brookline, Massachusetts. “Clara’s extraordinarily talented, and I thought this could be a really fun project for us to do together,” says Couric, who had no qualms about hiring her sister for the job. “She’s six years older than I am and very nurturing—I think she enjoyed taking care of me when I was little.” (“Katie was always very entertaining,” Batchelor recalls. “I’m not a big talker, but if you had Katie around you didn’t have to worry about what you were going to say!”) 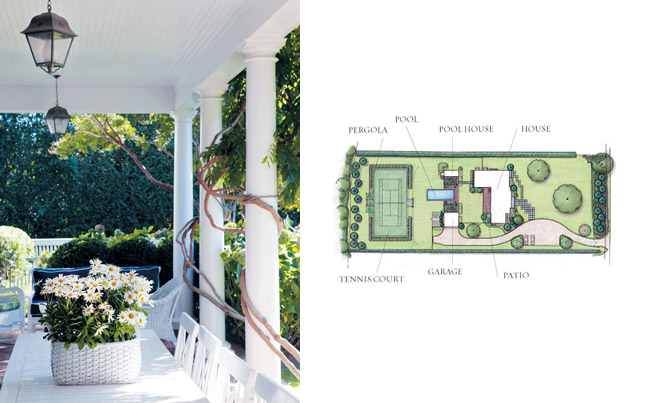 Alfresco Living | Batchelor’s plan for the narrow property (right) allowed for lots of outdoor living spaces and places to relax. Wisteria (left) climbs the pillars of the patio.

Despite her big-sister tendencies, Batchelor treated Couric the same as any of her clients. “This wasn’t Clara’s little vanity project,” Couric says. “This is my house and property, and she was very respectful of that. She would make recommendations but never did anything without talking to me first.”

“In many ways the landscape had everything that Katie wanted—privacy, a pool and a tennis court—but there was very little charm and appeal,” says Batchelor, who reconfigured the driveway and parking court so as not to obscure the focal point of the front door, which is now enhanced with low plantings on either side and a new path of stepping stones that lead to it from the repositioned driveway. 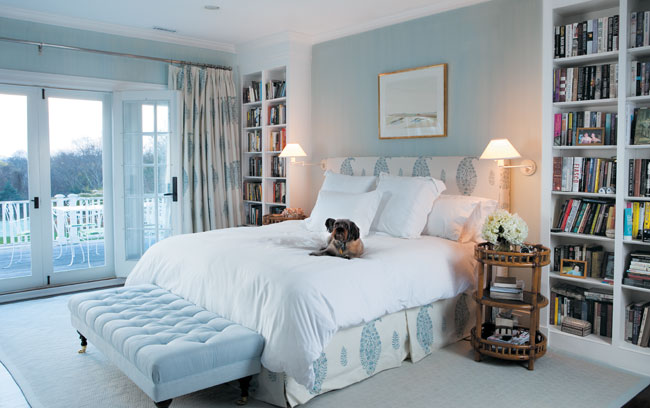 Cozy Lair | The master bedroom, where Maisy relaxes, is sea-foam blue. “In the late afternoon, when the sun starts to go down, my bedroom is filled with a kind of rosy light and takes on a pink hue,” says Couric. The watercolor above the bed is from the jacqueline Kennedy Onassis auction.

At the rear of the house is a wonderful covered patio, perfect for outside dining, but the view from it was murky at best. A white picket fence and row of hydrangeas enclosed an adjacent small lawn, and a large shade tree loomed too close; these elements obscured the connection between the house and the pool and left the landscape hemmed-in and claustrophobic rather than inviting and airy. Batchelor removed the fence and hydrangeas and repositioned the shade tree, opening up the view of the pool and even the tennis court beyond. 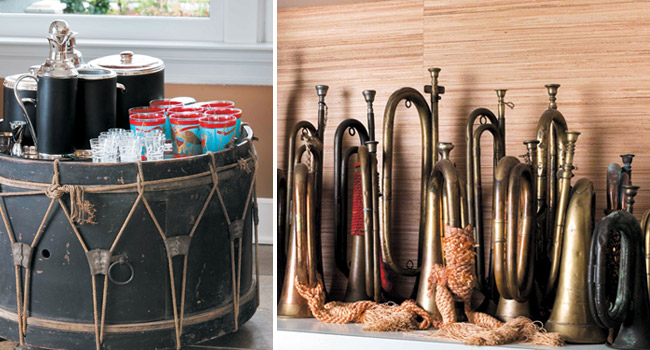 Harmonious Arrangements | An antique drum doubles as a bar/table (left); bugles collected by Couric’s late husband, who was a bugler for a group of Civil War re-enactors, line a shelf (right).

As for the pool, it was saddled with unattractive brick coping and a lopsided deck; Batchelor added new bluestone coping and potted annuals that give vertical definition to the pool’s horizontal plane. Completing the setting are symmetrical pergolas covered in wisteria and perennial beds planted with peonies, phlox, coneflowers, daylilies and ornamental grasses. “Katie loves to harvest her own vegetables,” says Batchelor, “so I also added a vegetable garden near the pool where she grows herbs like rosemary, basil, oregano and thyme.” 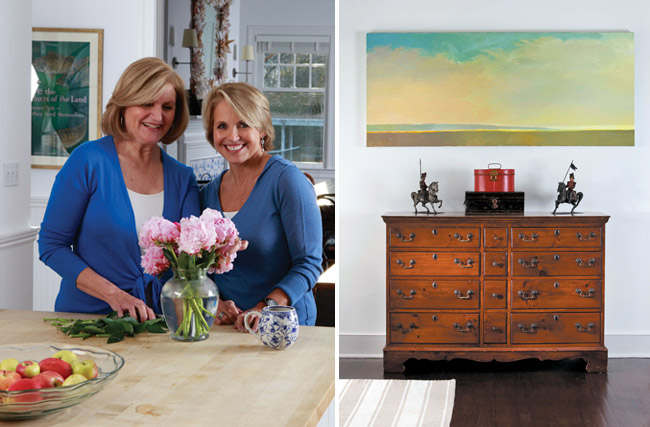 At the far end of the long, narrow lot sat a “functional but nondescript tennis court,” so Batchelor planted out both ends with lilacs, viburnums, roses, clematis and hydrangeas. Couric, a tennis buff, loves to relax after a hard game under a new net-side pergola, profuse with climbing orange trumpet vines. “It’s a great vantage point when I’m about to cough up a lung after playing!” jokes Couric, who spends a lot of time outdoors in her new setting, “sitting on my tush by the pool, reading or playing tennis and just enjoying the quiet, lush environment and the beautiful sunsets. I love doing all the typical things in the Hamptons, like making dinner with friends. The minute I walk in the door here, I’m able to exhale in a way that I can never quite do in the city.”