Each February, 60,000 people descend to Miami to party under white tents with celebrity chefs and wine makers. South Beach's Wine & Food Festival is one of the biggest star-studded events in the food and wine industry today.

For years I’d heard about the South Beach Wine & Food Festival (sobefest.com), the biggest powwow of passionate oenophiles and gourmands. Each February, 60,000 people descend on Miami to party under white tents with celebrity chefs and winemakers. This year, I finally experienced this four-day “Burning Man” of food and wine.

The kick-off party, now called the “Q” (a shortened version of its original name, “Bubble-Q”), was a Champagne-soaked affair sponsored by Moët Hennessy. Under a towering white tent on the beach near the Delano, people ricocheted between the celebrity chef stations and the many bubbly bars. The festivities, including acrobatic dance performances, continued into the wee hours at “Q After Dark.”

During the weekend, I was tempted by one star-studded party after another, from the famous “Burger Bash” to a tribute dinner honoring Nobu Matsuhisa (hosted by Martha Stewart). Guy Fieri held sway over a beachfront reggae jam featuring Ziggy Marley onstage. But the most enthralling event, for a wine lover at least, had to be the “Best of the Best.” This annual highlight, held this year in a ballroom at the magnificent Fontainebleau Hotel, featured row upon row of top-rated wines, along with nibbles by some of the country’s best chefs.

With so many great wines to try, navigating the “Best of the Best” can be a challenge. I moved slowly, making my way from light whites on up to heavy reds, pacing myself with plates of food in between. Considering the $350 entry price, it’s best to drag out the pleasures as long as you can. 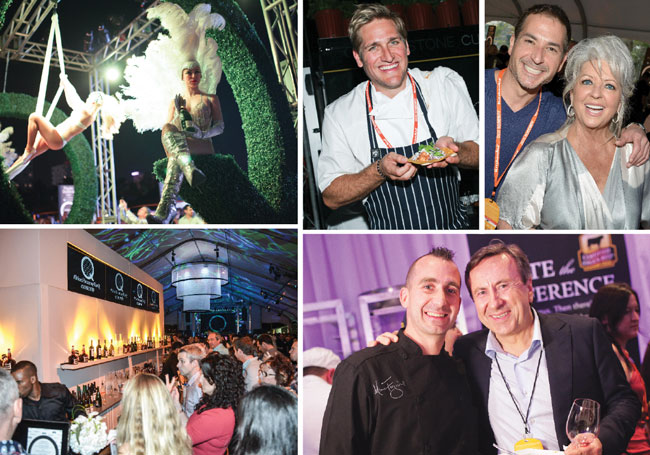 A friend and I kicked things off with a comparative Champagne tasting. We sipped Pommery and Palmes d’Or while waiting in line for Nobu’s toro tuna handroll. We tried Krug against an equally rich Gosset cuvee with a spicy yellowtail roll. Gosset, the oldest Champagne house dating from 1584, was a marvelous discovery. Tasting the great bubblies side by side gives a real sense of their distinct personalities—some floral, some mineral, some pinot noir-driven and some possessing the wonderful brioche flavor coming from blanc de blancs.

From there, we tried Sauvignon Blanc expressions from different parts of the world—from the exotic tropical notes of Te Koko, from New Zealand’s Cloudy Bay, to the intense minerality of a Sancerre from Pascal Jolivet. Then on to white Burgundy: An old vintage Louis Latour proved a perfect match for a Marc Forgione lobster dish.

Everyone was happy to share what they’d discovered, like investors doling out hot stock tips. “Get the Schrader Cellars Cabernet,” advised Per Holmberg, wine director at Christie’s auction house. And that started us on a journey of Napa’s great reds: Beaulieu Vineyards, Far Niente and Joseph Phelps, among others.

“Try the Numanthia,” was a frequent refrain. It’s a lush powerhouse red from the Toro region. Daniel Boulud, a guest at the event—not an on-the-clock chef—strolled by with a pretty woman on his arm. I steered him to Termanthia, one of the Spanish cult wines I had tasted a few years back, made by the legendary winemaker Manuel Louzada, who was on hand pouring his concentrated Toro gem.

As the tips kept coming—“Marques de Griñon!” “Foie gras hotdogs!”—we rushed for the last sips and bites, clocking three hours of discoveries. It was gratifying to find out that this evening’s indulgence (along with the other nights’ festivities) helped raise $1.9 million to benefit the Florida International University’s Chaplin School of Hospitality and Tourism Management.