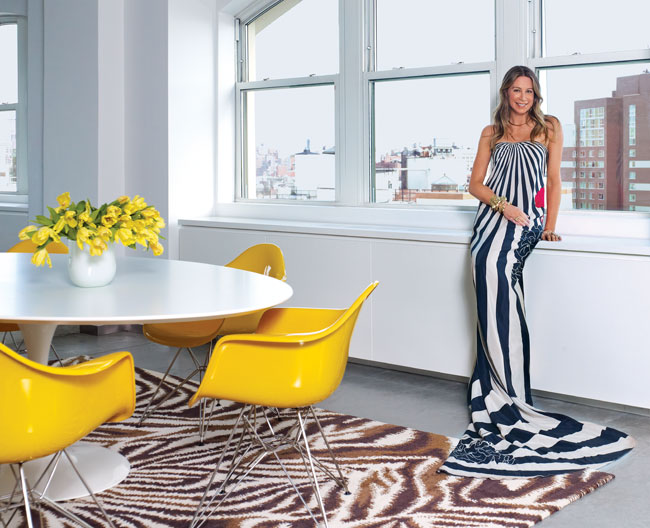 The word “mom” is pretty much the last thing
that comes to mind upon meeting Jennifer Fisher,

given her daily uniform of skinny cargo pants, vintage rock T-shirts, perfectly composed layers of chunky gold jewelry, and tousled honey-colored hair. But Fisher, who designs an eponymous line of jewelry and a fur collection called Wyler, is the quintessential New York City mother. Juggling the demands of raising two young children—son Shane, 6, and daughter Drew, 5—with the responsibilities of running her SoHo-based business, she faces the daily challenges of most working parents. So it’s hard to fathom how she also managed to find the time to do a gut renovation of her sprawling Tribeca apartment. 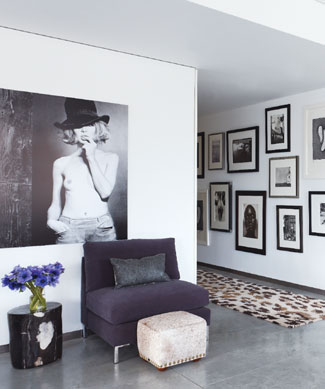 Fisher, a Santa Barbara, California, native, was a freelance fashion stylist happily living in L.A. until 1997, when she met her future husband, Kevin, who was working on Wall Street. What began as a long-distance romance soon evolved into marriage and a move East for Fisher, who settled with Kevin in a West Village apartment, then a larger place in SoHo, before the couple started thinking about finding a more family-friendly neighborhood for their two young children. Tribeca, with the lure of the esteemed P.S. 234, was the answer.

But the area’s profusion of dark, warehouse-like spaces didn’t hold much initial appeal until they finally came upon what is now their light-flooded, 4,100-square-foot apartment, with nearly floor-to-ceiling arched windows and north-, south-, and east-facing exposures. On a clear day it truly feels like you can see forever from almost any spot—including the master bath, where, from the his and hers sinks, the views uptown and to both rivers are so vast and sharp they’re practically vertigo-inducing.


It feels like you can see forever from almost any spot

Converted to residential units in 1995, the building was originally a refrigerator warehouse. For Fisher, one of the best features, other than the “great poured-concrete floors,” was that upon conversion, “each unit was built out independently from raw space, so every apartment is different.” She chose to create a true loft space, with few walls other than those enclosing the bedrooms and bathrooms. “Sometimes I miss having walls,” she admits. “We have three televisions, but they’re basically all in the same room. You get used to a lot of togetherness—and chatter and noise!”

That said, the main living area is cleverly divided into distinct sections—a kitchen, a family room, a playroom, and a dining room—with well-placed furniture and built-ins, like an enormous Calacatta marble kitchen island and a set of low cabinets encircling the playroom. “We use the playroom cabinets as a sideboard when we entertain,” says Fisher. “It’s where the desserts go on Thanksgiving.”

The sleek, slightly subversive aesthetic that defines Fisher’s jewelry also characterizes the apartment’s decor, which she did herself along with the help of a good friend, interior designer Michelle Gerson, who offered opinions about paint colors, furniture, and wallpaper and designed the family room cocktail table. “I wanted python,” says Fisher, “but it had to be kid-proof—indestructible, with no sharp edges. Michelle found an amazing python-print vinyl—you can spill anything on it and wipe it right off—and added a Lucite tray to the top. She always comes up with good ideas to counter my own. I don’t like to take too many risks or feel overwhelmed by one style, so I’m comfortable sticking to a neutral environment and getting creative with the accents.”

Perhaps her two proudest achievements are in evidence in the master bath and in the kitchen. A “dressing room” that consists of open shelving along a full wall in the bathroom houses her pristinely arranged trove of shoes, bags, clothes, and Rick Owens leather jackets. From the shower she can assess the weather through the bank of windows on one side and then turn her head to select her outfit for the day from the opposite wall. “To me clothing is like art, so I wouldn’t ever want it kept hidden behind closed doors,” Fisher says. “Having my things out like that is a design element.” But it’s the kitchen’s room-sized pantry, with its own freezer and two freezer drawers—in addition to her glass-door Sub-Zero—that really lights her up. “I live for my pantry. I’m a foodie, and I love to cook. To have that much space for food storage is an even greater luxury than a walk-in closet.”


"I don’t like to take too many risks or feel overwhelmed by one style. I’m comfortable getting creative with the accents"

Although it would appear that downtime must be a luxury well beyond her reach, Fisher maintains that her bedroom is her “sanctuary.” Painted a soothing gray, the space reminds Fisher of a cloud. “It’s one of the few private areas in the apartment,” she says, “and where I go to breathe.” For a minute, one is tempted to buy the notion that she occasionally unwinds—until she adds that she likes to “clean out the closet to relax.”