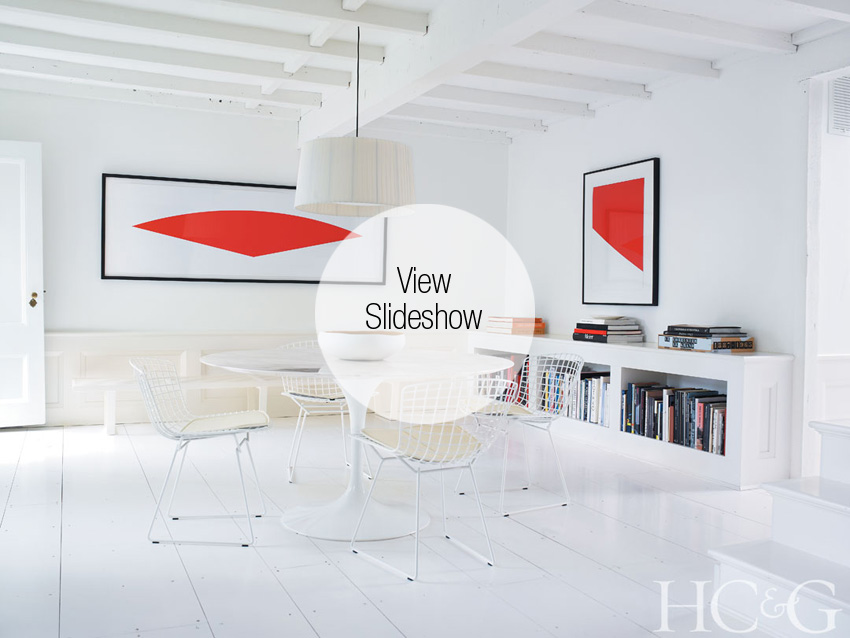 When Kevin Byrne, an interior designer and professor, met art gallery owner Will Ameringer at a benefit in 2006, the two aesthetes were each living in large homes in East Hampton and growing tired of the upkeep, the pools, and the steady stream of houseguests. Ready to downsize and relocate to the more cozy and rustic Sag Harbor, the new couple struck gold with the first place they looked at, a mid-1800s fisherman’s cottage on Upper Sag Harbor Cove.

Despite its unassuming façade, typical of many Sag Harbor saltboxes, the two-bedroom cottage holds a fantastic surprise for those who step through its doors. “The view from the kitchen in the back has that wow factor,” says Byrne, the interior design chair at Berkeley College in Paramus, New Jersey, and proprietor of Kevin Byrne Design. “And the lawn beyond leads not just to a water view but to water access—a dock. And if you have a dock, you’ve got to have a boat.” In their case, it’s a 54-foot Palm Beach Motor Yacht, dubbed Ocean Park, which is fully equipped for luxurious spins around Shelter Island and Peconic Bay.

Ameringer, whose New York galleries on West 57th Street (Will Ameringer Fine Art) and in Chelsea (Ameringer | McEnery | Yohe) specialize in contemporary works, felt similarly excited during this first viewing: “We both walked in and gave that look to each other,” he says. “We knew it was the place.”

Once all the papers were signed, each man took charge in his area of expertise. Ameringer, naturally, oversaw the art. He chose two Ellsworth Kelly lithographs that float like sails across the living room: Red Curve (2000) and Red Curve (State II) (1983). Byrne, a proponent of crisp, all-white interiors, mapped out the design plan. “Kevin can look at a place and envision what it’s going to look like six months later,” says Ameringer.

At first, the home resembled a preppy dungeon, proper but gloomy, with pine floors, hunter green walls, and heavy balustrades along the stairs. The couple cleared, cleaned, and whitewashed (“That was most important,” says Byrne of the latter endeavor), applying an oil-based, high-gloss white marine paint to the floors and a variety of Benjamin Moore whites to walls, with shades keyed specifically to each room’s intake of natural light.

And so it was Decorator’s White for the living room; Super White eggshell for the kitchen; Super White for the dining room; Benjamin Moore White (a cool white) for the master bedroom, which gets an intense amount of sunlight; and Atrium White, a warmer white, for the guest bedroom—all shades subject to revision and tinkering. “Changes occasionally occur in the rooms,” Ameringer says. “I get out to the house from the city, and I can tell Kevin’s been futzing!”

Despite these seemingly infinitesimal nuances within the spectrum of whites, Byrne and Ameringer insist that their interpretation of minimalism is not an uptight one. “We’re not obsessively neat,” Byrne says. “Guests are very relaxed here. The house has to be lived in.”

In keeping with the spirit of the place, home improvement measures have generally been easy-going, more surface than structural. “Rather than doing a major renovation, it was basically about taking this very charming 19th-century cottage and bringing our own aesthetic and modern furniture to it,” says Byrne, who paired a marble-topped Eero Saarinen table with Bertoia chrome side chairs in the dining room, while in the living room a chrome Marcel Breuer coffee table, white leather Eames lounge chair, and Mies van der Rohe daybed reupholstered in chenille hold court. (Ameringer does admit to giving up a pair of severe Donald Judd chairs in the name of cooperative, comfort-oriented nesting.)

Long weekends at the house include tennis in the mornings and afternoon boating excursions. The couple’s yacht is essentially a mobile, miniature version of their home, with an all-white Byrne-designed interior (white leather banquette, Saarinen table) and artwork curated by Ameringer, including Slim Aarons photos of Babe Paley and C. Z. Guest gracing the cabin walls.

Ocean Park also played a major role on their wedding day in August 2011. “Because I didn’t want to walk down an aisle,” says Ameringer, “we arrived by boat and walked up the dock. We had to time the wedding according to the tide.”

Now that the nuptials and the redecoration are past, the two have settled nicely into their bright white abode, with only one blotch on an otherwise impeccable canvas. It happened last winter when Byrne, while tending a fire, forgot to open the flue. “It caused some darkness and grit that I could not get off the living room walls,” he says, to which Ameringer claims, “He has yet to live it down. But it gave him more opportunity to paint things white.”

A version of this article appeared in the August 1 2012 issue of HC&G (Hamptons Cottages & Gardens) with the headline: Getting it White.