Step Inside a Casually Eclectic Home in Southampton 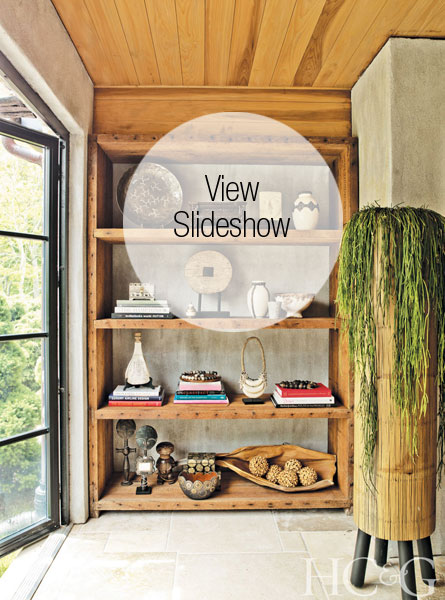 These days, carriage houses from the East End’s Golden Age are few and far between, especially ones with an architectural pedigree. But interior designer Deborah Heimowitz and her family own just such a treasure, on two rolling acres in Shinnecock Hills. It was designed in 1911 by renowned architect Grosvenor Atterbury (1869–1956), who lived in the carriage house himself after his own adjacent estate burned down.

Atterbury, a Detroit native, was educated at Yale and trained in architecture at Columbia before going to work for McKim, Mead & White. Although he designed a fair share of townhouses and even tenement blocks in Manhattan, he spent most of his career creating baronial homes for wealthy industrialists on Long Island, where his parents had a home called Sugar Loaf. He is perhaps best known locally for the original Parrish Art Museum, on Jobs Lane in Southampton.

The carriage house’s steeply pitched roof, half-timbers, stone foundation, and multicolored brick are hallmarks of English Tudor style, with many details still as they were when horses were stabled there. Even the century-old diamond-pane windows remain in place. “They’re terrible,” says Heimowitz. “They let all the cold air in, but no way am I getting rid of them.”

The designer and her husband, Dan, an investment banker, have two sons and had been longtime renters in the area, but they weren’t actively looking for a second home. While visiting friends in Quogue on a winter weekend seven years ago, Dan was leafing idly through a real estate brochure and came upon the carriage house, which had its own two-page spread and was listed at “a crazy price,” Heimowitz recalls. “I said, ‘It’s beautiful. Are you out of your mind?’” They ended up looking at it that very day, despite a heavy snowfall. “As soon as we walked in, we looked at each other and said, ‘This is it.’”

The five-bedroom, five-bath, 3,500-square-foot structure was in tip-top shape, impeccably renovated by the previous owner, who had bought the place as an investment. He brought the mechanicals up to date, added bathrooms, and, most dramatically, attached a stone-walled, angled dining room extension that bridges the two original wings of the L-shaped house. Fortunately, the finishes he chose—radiant-heated ceramic tile floors, wood-paneled ceilings, and concrete walls skim-coated in stucco—are very much to Heimowitz’s taste.

Despite the extensive renovation, the house retains most of Atterbury’s layout. In one of the original two-story wings, the ground floor, which once stalled horses and was later used as a garage, has become a living room with French doors leading to a new patio. The present-day den is in the space originally occupied by the kitchen (iron cooking implements can still be found in the fireplace). Wide black doors that once opened to admit cars and carriages are still in place in the dining area, and the Heimowitzes sleep upstairs, in what was formerly the hayloft. The other wing, which Heimowitz describes as “very cottagey,” includes a separate staircase and four bedrooms. “It’s not a mega-mansion with lots of extra rooms,” she says. “We live in every inch of the place.”

When it came to decorating, Heimowitz sought a departure from the family’s traditional city apartment and appreciated how the uniqueness of the house allowed her free rein. The concrete walls, bare of crown moldings or baseboards, suggested a modern treatment. “I wanted contemporary interiors with natural finishes that draw on the original architecture,” she says, “and eclectic furnishings for a casual vibe.”

Heimowitz also focused on emphasizing the connection between inside and out, as the house’s several patios are used for frequent entertaining. She chose muted, organic colors that echo the landscape and materials like metal and wood for the furnishings, introducing such textures as the beige grass cloth on the master bedroom’s soaring ceiling. The neutral palette ensures that one room flows into the next. “I didn’t want color to dominate the house,” Heimowitz says.

Contemporary furnishing pieces, including a sofa designed by Barbara Barry, dining chairs and a chandelier from Holly Hunt, and an Indian-inspired headboard from John Robshaw, are supplemented with accessories from far-flung shores. Vases, mirrors, and other items from India, Africa, and Indonesia commingle with the occasional mid-20th-century classic.

Heimowitz’s eclectic approach is easily justified. “The house reminds me of a Cotswolds cottage, yet it’s at the beach,” she says. “Most people assume that if you have a 100-year-old carriage house, you’re going to furnish it in a very traditional way, but I felt like I had an opportunity to interpret things differently.” After all, she adds, “it’s not your typical house.”

A version of this article appeared in the August 15 2013 issue of HC&G (Hamptons Cottages & Gardens) with the headline: Carriage Trade.