Step Inside a Colorful Neo-Colonial Bursting with Pattern 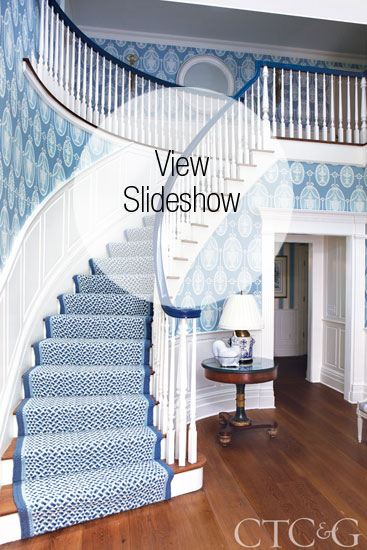 Anthony Baratta gets colorful on the subject of color: “There’s going to be some trouble if a client were to tell me that I can’t use color. Anyone who knows my work has to expect a lot of color from me.” Fortunately, the couple who owns a century-plus-old, neo-Colonial home in Fairfield County knows all about Baratta’s penchant for hue. “They’re very enthusiastic about color, too,” says Baratta of the husband and wife, for whom he also designed a Manhattan apartment. “We had their trust to work with the shades we chose,” he adds, referencing his late partner in design, William Diamond, who also worked on both projects. “I like to joke that Bill thought he invented tartan and toile and gingham, but one thing he really did invent was colors—and he kept them going through our career together.”

Typically, a Baratta project begins with a palette of colors chosen well before furnishings or accessories are selected. “With this project, as I always do, I started with primaries, but in adjusted versions,” he says. Baratta’s yellow leans toward a sunflower or gold. Red assumes a rusty tint. Blues are grayed out. Greens go to nature’s hues. “I put a twist on every color, make an adjustment so it becomes something else,” Baratta continues. “Plus, when you use color right, you’re able to play up existing architecture. Color reveals structure. I want to work with the architecture, not sanitize it away.”

Color greets a visitor at this home’s threshold: an enveloping hue of Wedgwood blue that defines the boldly scaled neoclassical-motif wallpaper, and elsewhere on chair fabrics and along the sinuous staircase banisters. “The couple has a particular aesthetic,” says Baratta, “something that is much more French than English, and this shade of blue honors that desire. They’re very stylish people, and they want their homes to be stylish but also classic.”

In the living room, Baratta did something he never had before. “I actually used a Diamond Baratta fabric on the sofa. When you design a fabric collection, it’s nice to actually use it in a project. It makes the pattern much more meaningful.” That just-off-red was the launching point for the room, which combines a busily patterned 19th-century French plaid rug with blue-gray walls. “I love this room because it contains actual American architectural details, such as a quirky Federal mantel, as well as country French elements,” notes Baratta.

Some of that passion for blue carries into the kitchen, with its painted checkerboard floor, blue ceiling and countertops, and, notably, its panels that carry painted botanical images, each amid a background of blue. “The idea was to create a country kitchen, but with jazzy details, like the arched hood and blue backsplash.” Of the four archways in the room, Baratta says: “One thing I know how to do is make an arch. There are more arches in my projects than I can count. The Romans invented the arch. Maybe it was one of my ancestors?”

In keeping with the couple’s daily use of the family room, Baratta created a true country retreat within a country home. “I will always love patchwork, and here was a chance to use it as upholstery—sewn together little pieces of fabric from Provençe,” explains Baratta. “Also, Bill and I were known from the start for gingham rooms, and I’m still doing them.”

Few designers would admit to not wanting to create rooms that are too pretty, but Baratta is happy to fashion spaces that are merely beautiful but not, as he puts it, “overcooked or saccharine with prettiness. I like to exercise a certain restraint.” For the master bedroom, a virtual garden of soft greens, he wanted to make a space that was “simply lovely, and not overly feminine.”

“This house is a set piece,” says Baratta. “The couple loves it. And the way we designed it is the way I know it will stay forever.”

A version of this article appeared in the February 2016 issue of CTC&G (Connecticut Cottages & Gardens) with the headline: Colonial Power.