Step Inside a Colorful yet Traditional Lyme Home 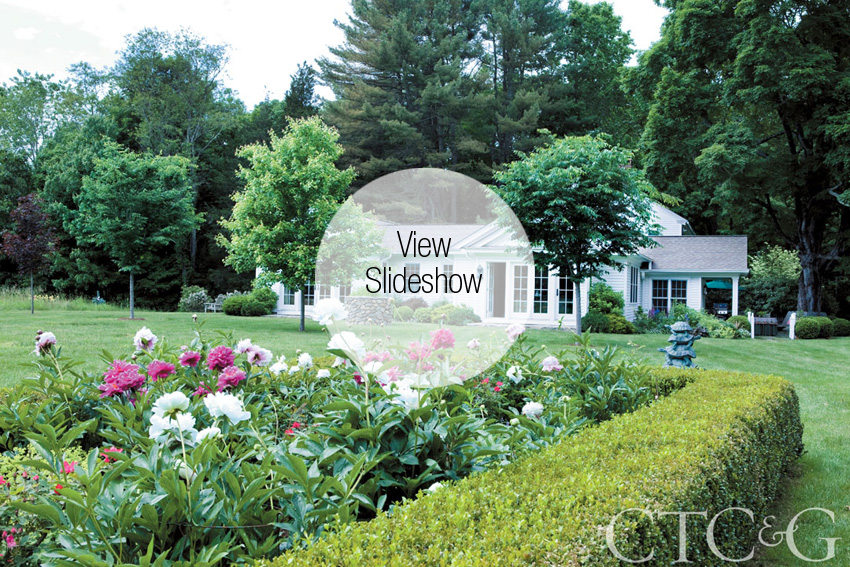 “Mark Hampton is my design hero,” says interior designer Paula Perlini about her renowned brother-in-law and one-time boss. As his lead designer (she worked on high profile projects like Blair House in Washington, DC, and New York’s Gracie Mansion), Perlini embraced Hampton’s iconic brand of relaxed traditionalism but ultimately brought her own unique style to residential projects (including the Connecticut Governor’s Residence) as the founder of Paula Perlini, Inc.

“At the core, I’m pretty much traditional, except I’m all about doing wild color,” she says. “I’m always trying to convince my clients to move away from white or even worse, gray walls because I believe color adds depth and makes everything from pictures to furnishings come alive.”

The home she and her husband, Carl Christensen, renovated in Lyme more than substantiates her point. When the duo purchased the 18th-century structure seven years ago, Perlini couldn’t wait to cover the existing living room paneling in a vivid tone of granny apple green (“I call it lyme,” she chuckles), infuse the Venetian plaster in the master bedroom with a serene shade of seafoam, and cover the walls in the kitchen addition in an arts and crafts wallpaper with an orange and mustard print on a hemlock background.

Poised at the center of 12 acres, which the owners have lavished with gardens that bloom with all things blue, pink and white, the original house was  little more than one utilitarian room with sleeping quarters above. Added sometime in the 1800s, the living room with its nondistinctive paneling and lackluster fireplace came alive with the designer’s deft mix of pattern, color and furniture styles. At the center, a multitoned ottoman topped in needlepoint bell pulls, a gift from Hampton, provided inspiration for the textured red fabric on the slipper chair and several of the pillows in similar shades and various prints on the window seat.

The pattern extravaganza continues with a pair of 40-year-old leopard-print Louis XVI chairs, and checked lime and white pillows. “I never do anything matchy-matchy. If there’s a hint that things go together, then they go together,” says the designer. “The secret to mixing prints is scale. You can’t have a lot of little patterns.”

The room’s sisal rug was selected with durability and the couple’s three Labradors in mind. Perlini was also thinking canine when she designed the hand-stenciled floor at the home’s entry. “The various shades of brown have a country feel and each corner features a paw print,” she says.

After preserving the rare pumpkin pine that surrounds the dining room fireplace located in the original structure, in keeping with the period Perlini introduced a Sheraton-style dining table surrounded by reproduction Queen Anne chairs. A totally unexpected antler chandelier fitted for candles lights the space. “The piece is made from fallow antlers, and there’s no electricity in the ceiling, so the candles are really used,” she says.

With nine-foot ceilings keeping existing spaces cozy, Perlini craved a shift in the new kitchen, where she added a cathedral ceiling and piled on the verdant layers. The deep forest-toned granite counters feature a lime streak, the chrome bar stools and lighting fixture boast a similarly bright accent, and the room is filled with pieces from the owner’s Westmoreland green glass collection. “I started collecting the glass 25 years ago and bought that wallpaper 15 years ago,” says Perlini. “All I needed was a room to put them in.”

The main floor’s master suite addition opens to a wildflower meadow and is the only space in the house with window coverings. “I purposely selected a tiny diamond chintz pattern toned to match the walls so they would kind of disappear,” says Perlini, who chose a more muted palette of pale pinks, greens and blues for the sleeping quarters. Underfoot is a patterned antelope carpet that has become one of her signature items. “I use it everywhere,” she says. “It goes with chintz and wools, gives a room depth, and is just great for dogs.”

A version of this article appeared in the May 2012 issue of CTC&G (Connecticut Cottages & Gardens) with the headline: Lyme Green.