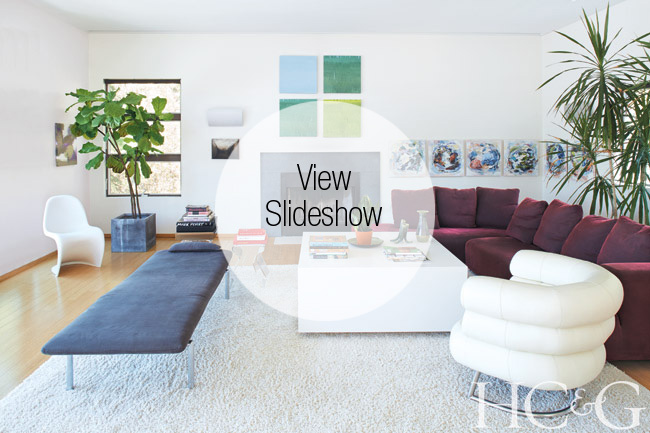 Mark Perry’s process as an abstract painter is anything but straightforward. His work, he explains, results from a sort of loose exploration with paint. “I pick up the paint and put it down, leave it alone, do it again, and listen to the inner voice telling me when to stop,” says the artist, who fashions intense, lovely oils, amalgams of color with nature-based titles such as Land & Sea, Earth Green Water Blue, Dunes Revisited, and Accabonac, named for the well-known harbor in Springs. Perry also creates more studious, representational pieces, “but using color is where the fun happens.”

Whenever it’s time to take a break and step away from his work for a while, Perry simply climbs the stairs from his basement-level studio in the contemporary home he shares with his partner, John McGovern, a finance professional. Built by McGovern in 2005 with architect German Barrios—who lives just down the road—the house is a three-bedroom, three-bath sited on what was then one of the last west-facing lots overlooking Three Mile Harbor. (McGovern capitalized on the high perch by erecting the structure on a 26-foot elevation.) It’s essentially two boxes with multiple levels connected by a central hall: One box is right-side up, with the kitchen and dining room on the lower level and a master suite upstairs; the other box is upside down, with the living room sitting on the top level and guest rooms below—a configuration that sometimes makes communicating a challenge. “Our weekend guests often have to text me if they want something!” McGovern exclaims. Perry’s basement studio is enormous, as the space was dug too deep during excavation—a happy accident, given the artist’s predominantly large-scale works.

The creative community and natural beauty of the East End provide Perry with constant inspiration. “I make so much work,” he says. “I have stacks of it in my studio.” His paintings have most recently been exhibited at Elizabeth Dow Home and Surface Library Gallery, both in East Hampton, and he had his first solo show this spring at Ille Arts in Amagansett, where he exhibited five eight-foot-square paintings. Whenever he’s not working, he can typically be found spending time with McGovern poolside or on the house’s expansive deck. “There’s nothing like the view,” McGovern says.

The interiors evolved over time, a labor of love for both men, despite the house’s streamlined simplicity. “I love every minute of the hunt,” McGovern says, recalling the thrill of discovering a Lucite bar cart and an Eileen Gray Bibendum chair. “The house has become very special. Sometimes I pinch myself because it’s so glamorous, and I’m not!” “My contribution is art,” adds Perry, who collects the work of Robert Loughlin, a painter, offbeat sage of modernist design, and creator of “The Brute,” a tough-looking guy sporting a scowl and a cigarette, many renditions of which hang throughout the house. “A lot of people in New York collect him—I think I have 50 pieces.” But with five floors, the carefully curated, gallery-like rooms still have wall space to spare, with Perry’s work displayed to good effect. “When your boyfriend’s an artist,” McGovern says, “you need lots of white walls for paintings!”

A version of this article appeared in the July 1 2015 issue of Hamptons Cottages & Gardens with the headline: Art Smart.