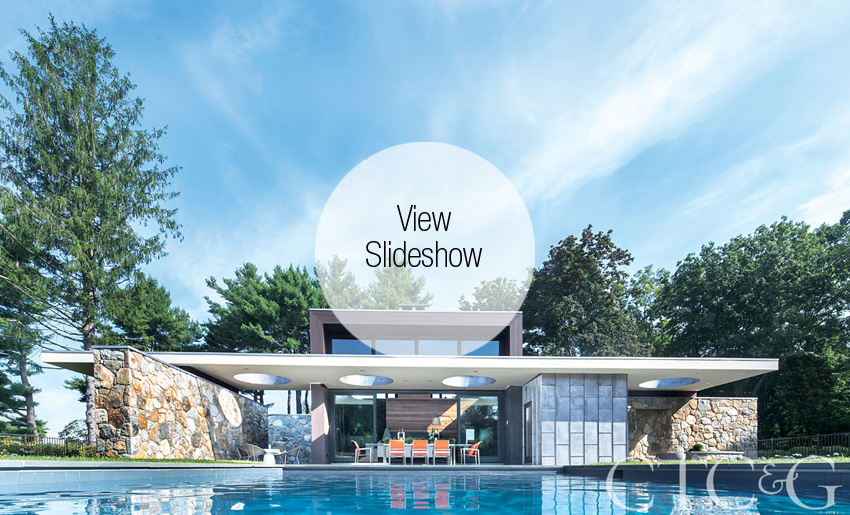 It’s not often that a vacation retreat lies a mere 200 feet from a person’s front door. Yet, whenever the occupants of a traditional shingle-style home in Redding want to get away and immerse themselves, not only in a different place, but also in a different aesthetic, they walk across a patch of manicured lawn to their new pool house. “The client tells me that he and his family spend more and more time in the pool house than they ever imagined,” says Jonathan Wagner, the Weston-based architect of the newly built 550-square-foot structure. “They like the open space inside, its airiness, its simplicity. They think of it as a retreat. The first directive they told me was that they wanted a piece of sculpture in the landscape, and that’s what they occupy every time they are in their pool house.”

Many such structures wind up being miniature versions of the main residence. But here, the clients had a vision for a dwelling wholly different in spirit from their cedar-shingled house. “The very fact that they wanted a contemporary building like this speaks exactly to who they are, how they really understand the power of modern buildings,” says Wagner.

The architect is proud of being a Connecticut native, and he embraces every natural element of the state. “Natural fieldstone walls are one of those details that makes something Connecticut,” he says, “and I was intent on incorporating the material here.” The new structure makes ample use of that very stone—a material that is as easily found on centuries-old walls that trace properties all over the state as it is on decidedly modern dwellings in places like New Canaan.

The architect established a dialogue between the main house and pool house by referencing materials rather than aesthetics. While the primary residence uses stone as its base, here it rises as full-scale walls that extend into the landscape. Rather than repeating cedar on the exterior, it is used inside the pool house to create a subtle and beautiful banding of colors. “The horizontal tongue-and-groove woodwork is not unlike Chinese puzzles,” explains Wagner. “The whole point of using natural materials is that they shouldn’t, and really can’t, perfectly match. That’s part of their appeal.”

The core of the structure is a double-height cube, its uppermost part ringed by operating clerestory windows. Concealed from the outside within a gray, zinc-coated element, the kitchen area features a window over the sink that also works as a pass-through to a fire pit. The kitchen is often bathed in natural light via a dramatic skylight that is encapsulated in a burst of orange. That same hue is referenced in the furnishings via the lacquered surfaces of a series of walnut cube tables, dining chairs and throw pillows. Interior designer Robin McGarry wanted the interiors to be bright and cheerful, and to contrast with the architecture that she characterizes as earthy. “The last thing the clients wanted was a neutral palette inside the pool house,” McGarry explains. “They wanted vibrant colors to brighten up the space.”

McGarry was also intent on keeping the main interior area flexible. The clients, who increasingly live and entertain in the dwelling, like to watch television there, so the designer had an extra-deep (45 inches) U-shaped sofa made to create what she calls “a very loungey area.” And custom cube tables were fitted with casters so they could be easily moved around the room.

When outdoors, the clients can dine beneath a stucco ceiling punctuated with five five-foot-diameter holes. “They cast the most beautiful shadows during the day,” says Wagner, who worked with landscape designer Nancy King of Seventy Acres Landscape Architecture and Design, “and the clients are enamored with them. They create a kind of sexy, Palm Springsy, James Bond aesthetic to the whole project.”

A version of this article appeared in the June 2016 issue of CTC&G (Connecticut Cottages & Gardens) with the headline: The Great Escape.