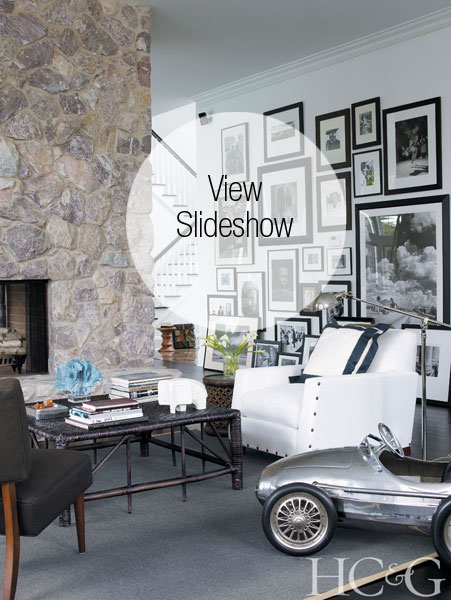 When city girl Phyllis Briley and car aficionado Rocky Boler started looking for a weekend house outside Manhattan, they set their sights on the Hamptons. It was the perfect compromise, Briley recalls. “I knew he would be spending a lot of time with his cars. I told him, ‘Wherever the cars go must be a place that I want to be, too.’”

The couple looked at about 30 houses and made an offer on the first one they saw a two-story, postmodern shingle-style on a hill above Water Mill. Built in 1998 by a developer and then taken over by a bank before it was completed, the house had never had a permanent resident. Structurally it was in great shape; the interiors, however, were a different story.

“Rocky had wanted something in move-in condition,” says Briley. “The master bathroom was done in pink tile, and the kitchen was tiny. I told him, ‘Don’t worry. I can design around it.’”

“To say I was a little skeptical is an understatement,” Boler says. “I couldn’t visualize how we were going to get it to where it needed to be.”

Fortunately, Briley had enough vision for the two of them. She was on the brink of leaving a successful corporate career to pursue her longtime passion of interior decorating. The house, with its high ceilings and large open rooms, provided the perfect backdrop for her contemporary aesthetic, which centers on a blend of mid-20th-century and traditional pieces. She points to Montauk- and Manhattan-based designer Vicente Wolf as a source of inspiration. “He knows how to merge traditional and modern—the beauty of the curves along with the sleekness. I can look at one of his rooms and say, ‘I understand this.’”

The first order of business: reconfiguring the unfinished basement and two-car garage to accommodate Boler’s collection of classic and high-performance automobiles, which include a 1957 Chevy, a 1963 Corvette race car and a 2007 Ferrari F430. Here, Boler had complete control of the design pro-cess. “Phyllis owned the upstairs,” he says. “I owned the downstairs.” He removed the walls separating the basement from the garage and added steel columns and beams. Nicknamed “the lower concourse of engineering,” the area covers nearly 2,000 square feet, with bays for seven cars, an office and a work-space. He wanted a sleek industrial look, so they installed the former kitchen cabinets, painted to resemble aluminum. The porcelain-tile floors look like distressed metal but don’t scratch or stain, a good thing for a place filled with car parts.

Upstairs, Briley went for a simple but graphic palette. “I’m a visual person,” she says, “so I’m drawn to black-and-white color schemes, and I wanted a crisp, clean look every-where.” Throughout the house, she painted the walls Benjamin Moore Super White and finished the oak floors with an ebony stain. In the living room, one wall is given over to a display of black-and-white photographs, many of which were taken by Briley’s sister. “What I like to do is provide a background,” she says. “I can’t take a whole lot of color all over the place.” She once removed all of the book covers on a bookshelf so there wouldn’t be too many colors competing for attention.

For the kitchen, which was doubled in size, Briley went for a more commercial feel. She added stainless-steel cabinets and countertops and a pair of polished chrome pendants, which hang above the custom center island, made of ebonized oak and topped with Carrara marble. Upstairs, the pink-tiled master bath now has white marble floors and tub, a marble stair for sitting, a “rain” showerhead and a flat-screen TV tucked into a wall niche.

Throughout, accent pieces provide richness and texture—navy floor pillows edged in white, a piece of blue coral—and pop against the pre-vailing black-and-white scheme. Briley scoured flea markets and thrift stores, including her local Salvation Army in Manhattan, in addition to tapping high-end sources for furnishings. “I learned early on that you don’t have to limit yourself,” she says. “If it’s not in the best condition, or not the right color, it can always be refinished or repainted.” She is obsessed with chairs, she says, and has them everywhere. “They are like pieces of sculpture to me.”

And speaking of sculpture: The Jonathan Adler white elephant in the living room is one of three in her collection. The first was a gift to Boler. “Before we bought the house, he kept referring to it as ‘that white elephant,’” says Briley. “So when we finally closed, I had the sculpture waiting for him in Manhattan, with its trunk raised triumphantly.”

A version of this article appeared in the July 15 2011 issue of HC&G (Hamptons Cottages & Gardens) with the headline: Dynamic Duo.

This article appears in the July-15 2011 issue of HC&G (Hamptons Cottages & Gardens).