Step Inside a Country Home Infused with City Glamour 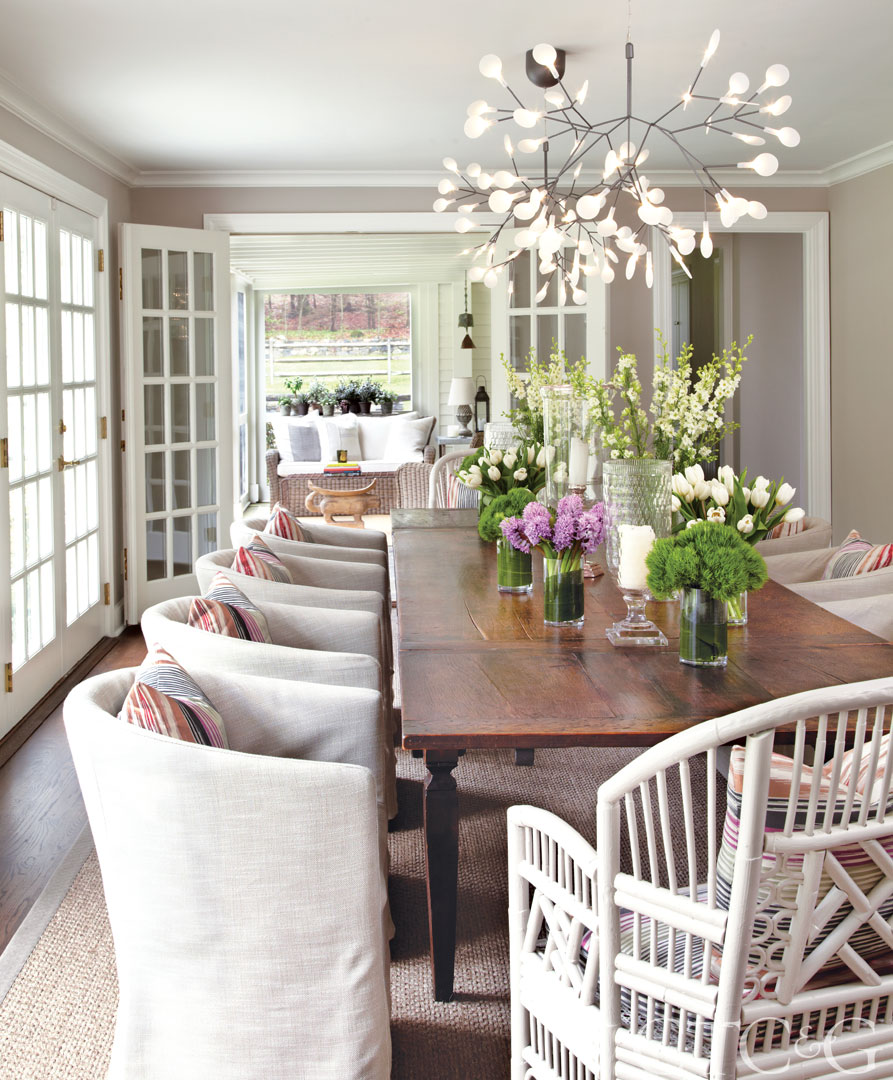 Neither the owners nor the interior designer of this Litchfield County home wants their tasks to end. Both are content that the weekend house remain a work in progress. “I hope my house never feels done,” says Jill Mangone, who lives in the Washington, Connecticut, residence with her husband, Intesar Haider. “I always want it to change as our lives change and as the world changes. I want to make sure it never feels stuck in one time.”

Interior designer Bennett Leifer, who heads his namesake firm in Manhattan, echoes that philosophical declaration: “Just as people change, so should the house evolve with them. Jill and I have such a strong working relationship that she feels comfortable calling me all the time to ask to add and change things. It’s about an evolution.”

In a sense, designer and client have evolved together. Leifer explains that the couple bought the circa-1950 neo-Colonial three years ago, just as he was establishing his design business. “This is one of the first projects I took on as a designer on my own and, so, it will always feel special,” notes Leifer.

The designer’s approach to any project involves presenting a few edited options. “I work with my clients, listen to them, honor their aesthetic, then give them choices,” says Leifer. For this four-bedroom home, he delivered the owners’ requirements: that the interiors embody both a country and urban vibe, that lighting be contemporary, and that furnishings reflect the local setting.

In a somewhat unconventional approach, they began by selecting interior paint colors. “We wanted a neutral palette because we didn’t want anything to interfere with the beautiful views outside,” says Mangone, referencing the range of soft lavenders and warm grays inside. Also, the restrained palette allowed Leifer the opportunity to infuse rooms with an edge of urban chic, a dynamic uncommon to most country abodes.

A pronounced example of that is evident in the foyer, with its stool covered in a long-haired Mongolian lambs’ wool and a convex mirror bordered by a mirrored edge that is, as Leifer characterizes it, “a fun piece that instantly tells visitors there’s an air of informality throughout.” He positioned there, too, a custom rug interlaced with gleaming metallic threads. “It conveys a bit of glamour while being sturdy enough to walk over in snow boots.”

Apart from a sofa and a dining table the homeowners brought with them, most furnishings were found and purchased from local sources. “Jill likes to buy locally, at estate sales and stores,” says Leifer. “She likes to be in touch with what is happening around her.”

Above the dining table, Leifer positioned decidedly contemporary LED fixtures that replicate tree branches. “In the summer, when lit, it looks like stars, and in the winter, icicles,” says Mangone. At the table, comfortable armchairs are slipcovered in a durable outdoor linen, in keeping with the home’s casual country feel. At each end, he placed a rattan chair, favorites of the client’s. “I often like to put different height chairs at a dining table,” he says, “because the eye gets bored if everything is on the same level.”

The lavender-hued master bedroom is a perfect amalgam of feminine and masculine. A wool throw harkens to the foyer bench, while a rigorously geometric bed with a patterned headboard is masculine. “My husband grew up in India,” says Mangone, “and they don’t have a sense of color prejudice the way people here do. There, it’s perfectly fine for a guy to wear lavender. I think that’s why I was able to get away with it in the bedroom. Bennett has made every room exactly as we want—comfortable but not pretentious, with a bit of city glamour in the country.”

A version of this article appeared in the April 2016 issue of CTC&G (Connecticut Cottages & Gardens) with the headline: Urban Country. 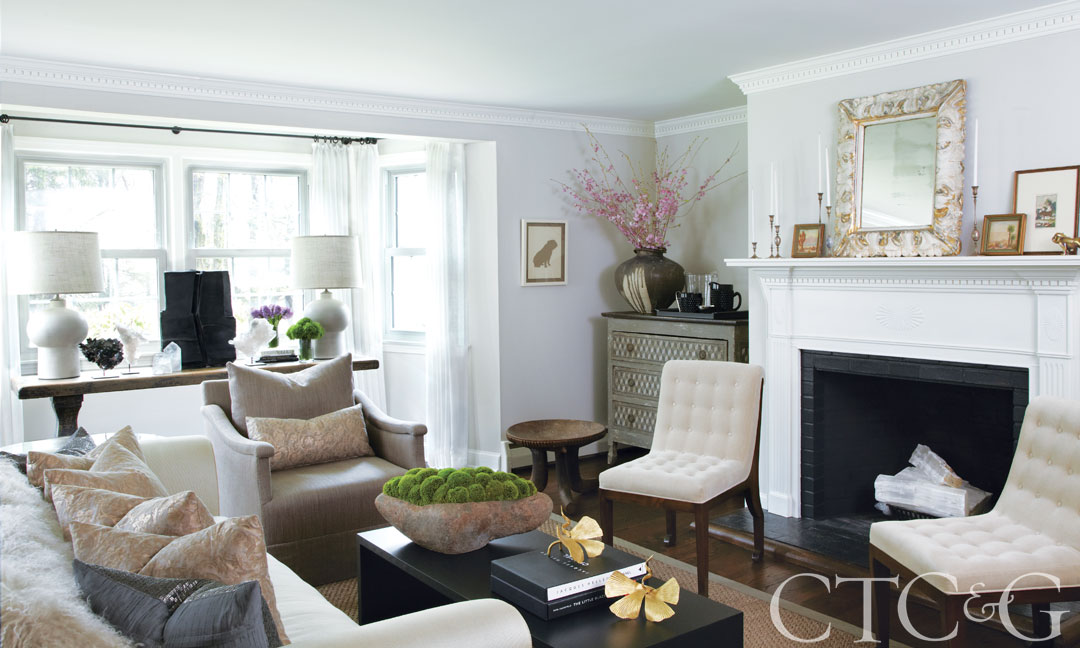 A moss-filled bowl from Pergola brightens a Calvin Klein coffee table in the living room. The mirror, framed by a pair of Ted Muehling candlesticks, and dark gray pillows on the sofa are from 1stdibs; gold and greige pillows are from Fortuny. Floral arrangements throughout the home are by Bennett Leifer. 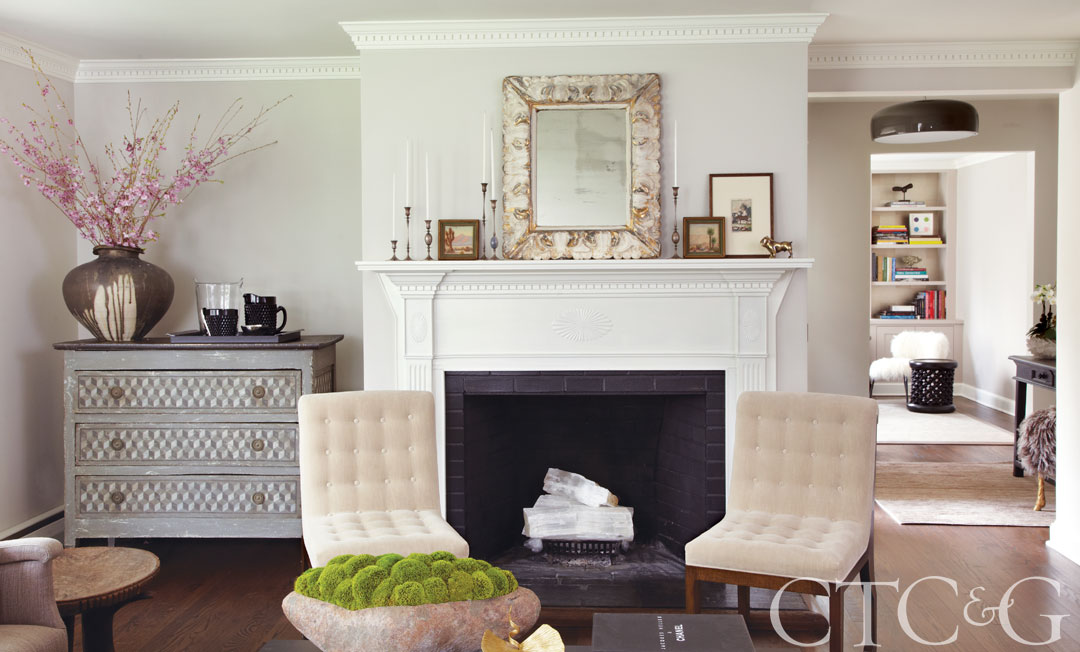 In the living room, a vase by Paul Chaleff tops an antique cabinet from Privet House, while slipper chairs from 1stdibs flank the fireplace. A Flos pendant illuminates the hallway that leads to a Mongolian lamb chair from DDC with a Tucker Robbins table alongside in the den. 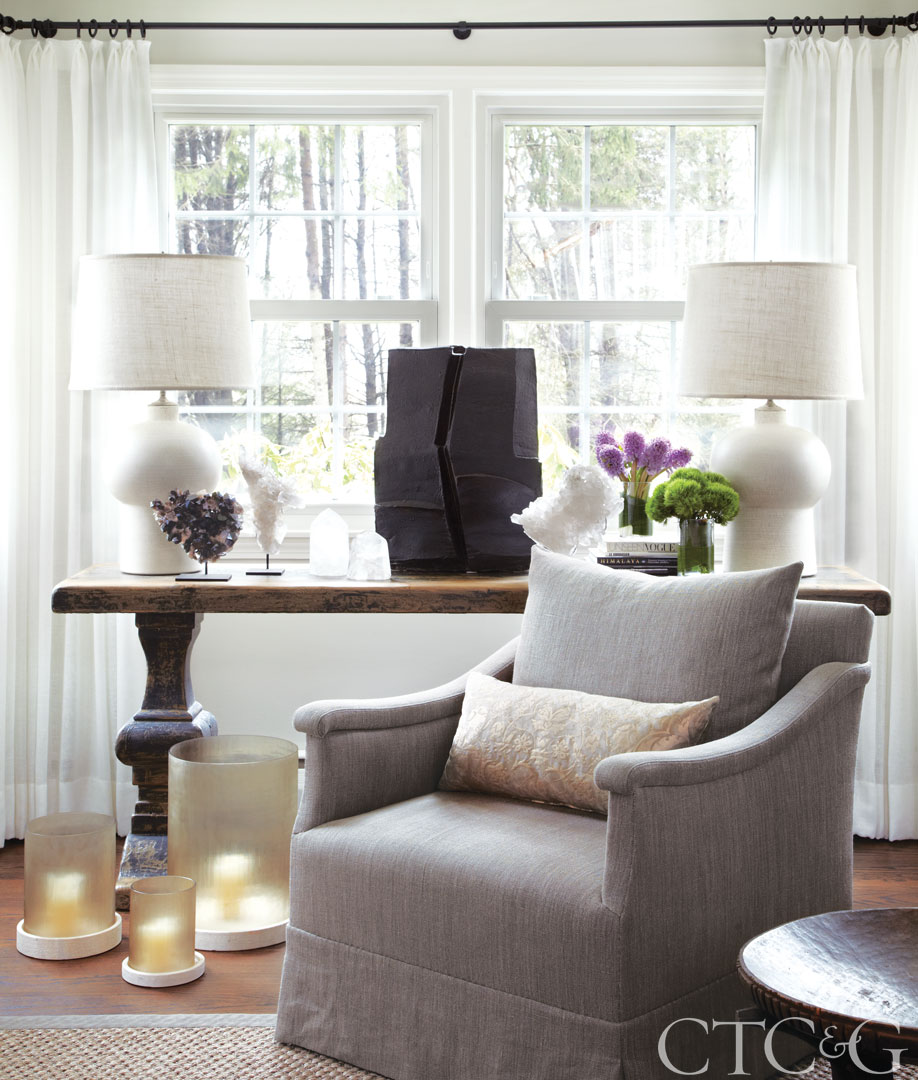 In a sunny alcove, a club chair from Dmitriy & Co. is backed by an antique trestle table from Privet House. Rock crystals are from Creel and Gow. 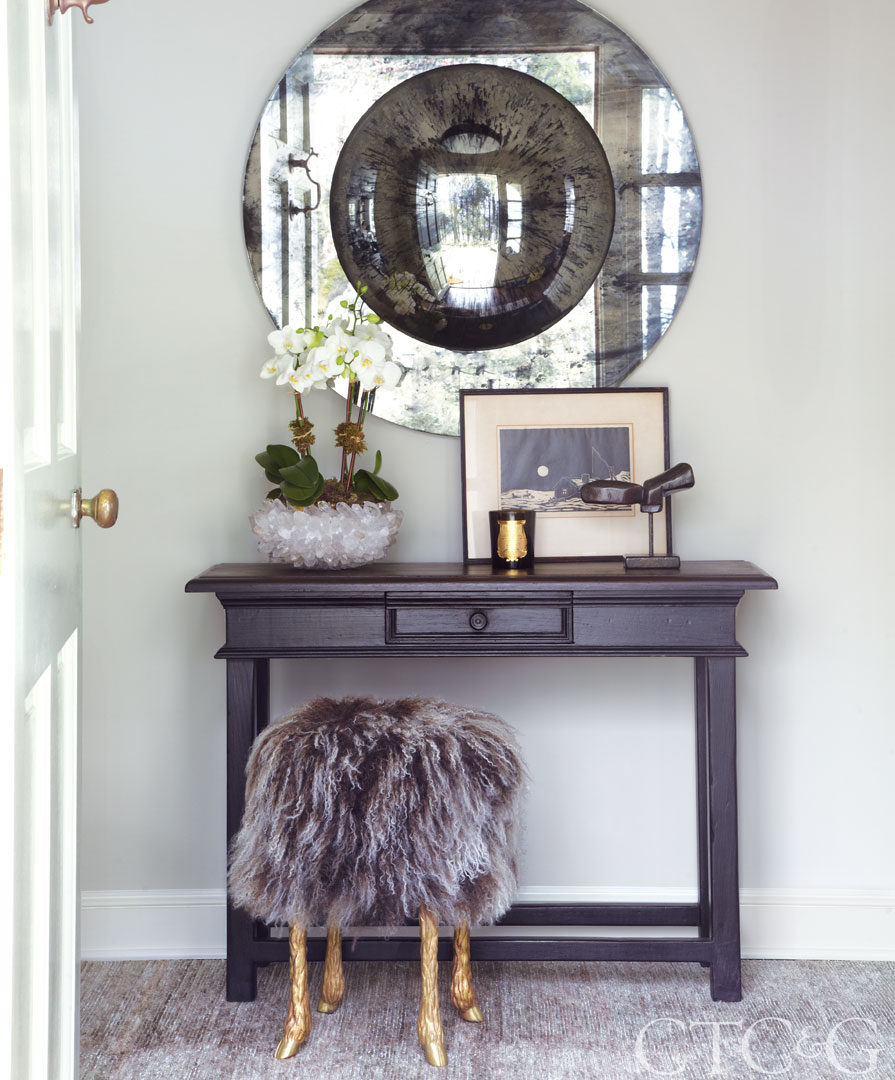 In the foyer, a bronze stool with cast animal feet was designed by Mark Bankowsky and purchased from Maison Gerard. A mirror from Michael Dawkins Home complements an antique console table from Lucca Antiques. Rug is through Edward Fields.

Moooi pendant lights from B&B Italia hang over a vintage farmhouse table. RH side chairs are slipcovered with a Perennials all-purpose linen; striped cushions are Missoni fabric through Stark. A pair of vintage rattan chairs are painted with Farrow & Ball’s Elephant’s Breath. 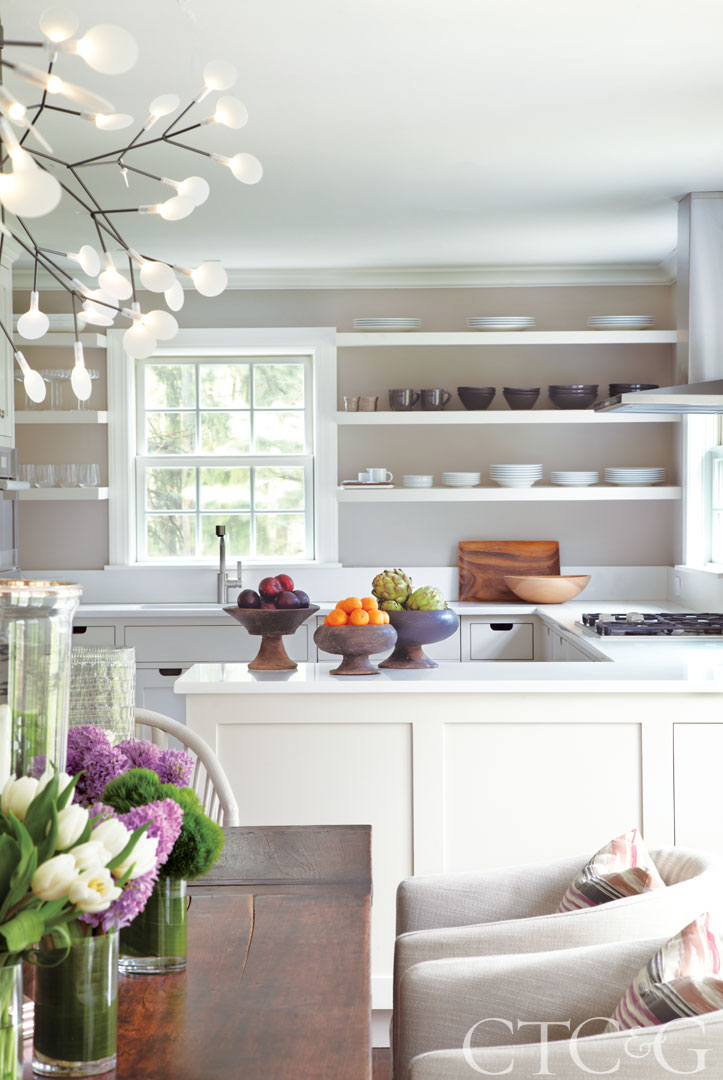 The client wanted open shelving in the kitchen so that she could see exactly what she had on hand at all times. Blackened wooden bowls from Privet House stand out atop Caesarstone countertops. 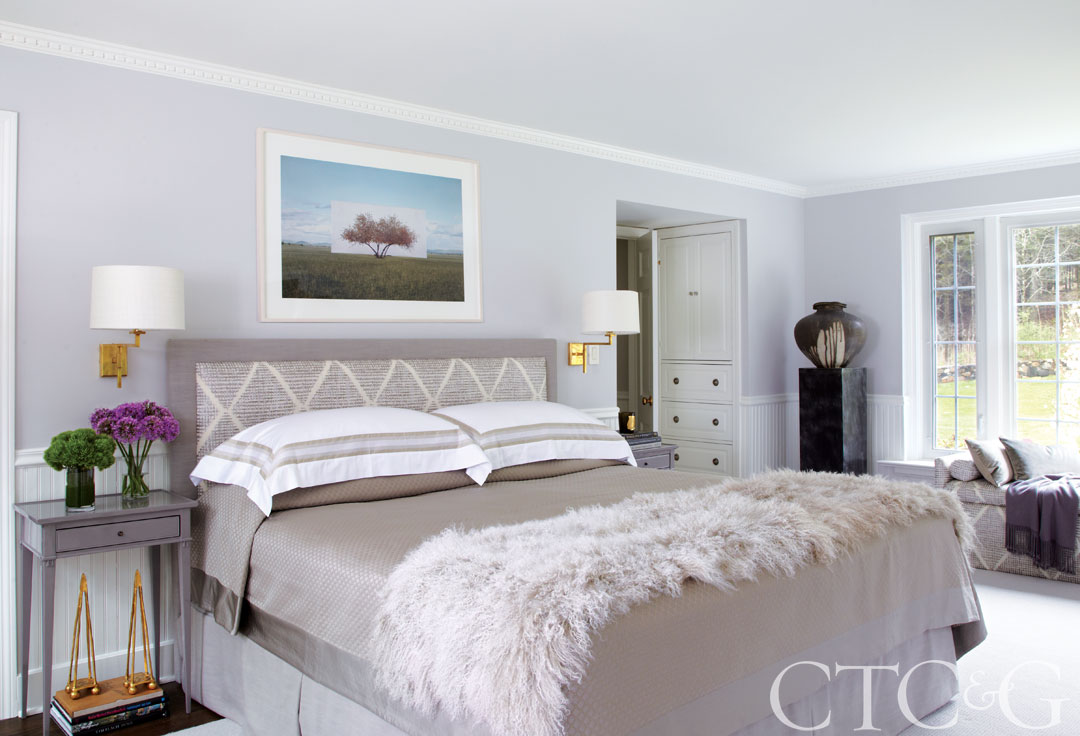 Vaughan sconces above lacquered side tables from Chelsea Textiles flank a bed with a custom headboard upholstered in Donghia fabrics. Bedding is by Frette. The artwork is by Myoung Ho Lee through Yossi Milo Gallery.

This article appears in the April 2016 issue of CTC&G (Connecticut Cottages & Gardens).