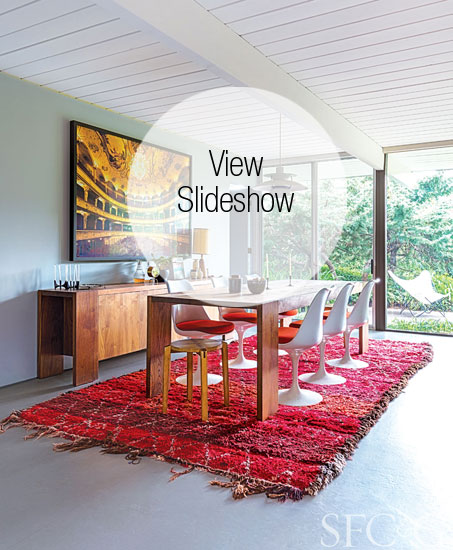 “I’d read about Joseph Eichler’s houses in Marin,” says Coralie Langston-Jones, an architecture and fashion publicist and lover of all things design-driven, “and I was drawn to his egalitarian approach to architecture.” Now, Langston-Jones and her creative-director husband, Brett Wickens, have their very own classic 1960s Eichler in leafy Lucas Valley, and they have injected it with new life.

The Eichler aesthetic has attracted creatively minded house hunters to the area, and as a result, it took Langston-Jones and Wickens more than a year to find their perfect three-bedroom perch. “Inventory is tight for Eichler homes,” explains Langston-Jones, noting that city-dwellers are now also buying them as second homes. The couple—having lived in smaller spaces in London, Hong Kong and L.A.—was also drawn to the property because of its relatively modest size. Originally built as an affordable tract home and part of a larger planned community, the house is situated among beautiful California oaks and expansive grasslands.

With the astute assistance of one of Joseph Eichler’s original salespeople and design direction from Langston-Jones’ London-based architect brother, Harvey Langston-Jones, the couple restored the 1,600-square-foot home’s original open, airy plan. They began in the kitchen by eliminating walls added in the 1980s. That reopened the central space, capitalizing on the views and leveraging the passive solar advantages of the design. “This house has many 360-degree aspects,” says Langston-Jones of the floor-to-ceiling windows, “and we have a lot of southern light throughout the day. This is especially true in winter when the sun dips beneath the eaves and bathes the spaces in warm light. In summer, when the sun is higher, the eaves keep us cool.”

The open kitchen/dining area is now the nexus of the home and a study in sleek finishes and elegant, muted tones. “We chose a gray palette,” says Langston-Jones, “as white is too brittle for these spaces, and the various shades of gray add warmth.” The color scheme begins underfoot with cool Marmoleum floors—a linoleum favored by Mies van der Rohe—that mimic poured concrete. Many of the main space’s original features, including the red-brick fireplace and rock garden, have also been preserved.

Langston-Jones’ love of all things midcentury modern is expressed in the iconic furnishings found throughout the home, including a Saarinen Tulip table and chairs, a Poul Henningsen pendant lamp and a George Nelson clock. In the living room, a leather three-seat Le Corbusier sofa serves a functional focal point. “This was my first buy after university, and it has stayed with me forever,” explains Langston-Jones. By chance, Wickens had the two-seat version of the exact same sofa pre-marriage, and it now graces the couple’s shared office.

The bedrooms are soothing, but feature pops of color by way of wallpapers, accessories or unexpected works of art. The master suite—a study in slate gray and white—is enlivened by a vibrant fuschia comforter and a matching Jacobsen Swan chair that punctuates one corner of the room. In keeping with Eichler’s indoor/outdoor aesthetic, a skylight in the master bathroom bathes the space in natural light. “Anywhere you stand in this house—even at the bathroom sink—you’ll connect with the outdoors,” says Langston-Jones.

“We wanted a warm, functional, serene home that we could grow old in—a place where we could raise our children and feel tied to the community,” she continues. “This is our forever home and a real piece of design history.”

A version of this article appeared in the February/March 2016 issue of SFC&G (San Francisco Cottages & Gardens) with the headline: Iconic Eichler.