Step Inside a European Country Inspired Home in Montauk 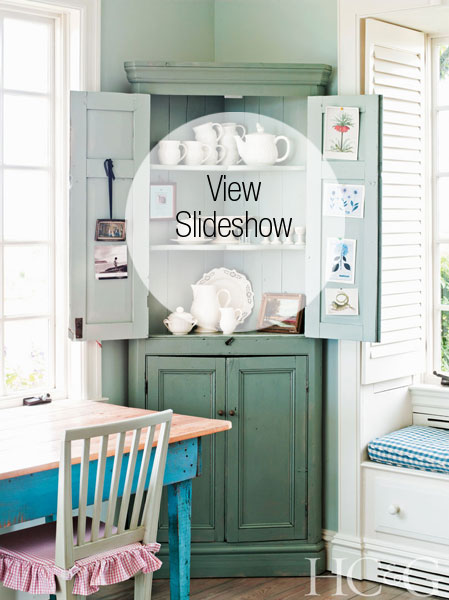 Past the surfers at Ditch Plains and not far from Montauk’s now improbably trendy trailer park, a densely wooded, hilly area is home to a who’s who of the town’s best-known residents: artist Julian Schnabel, J. Crew CEO Mickey Drexler and talk-show host Dick Cavett, among others. Sharing the stunning vistas across the shad-covered moorlands and bluffs are photographer Walter Iooss and his wife, Eva, whose dream home is an ever-evolving labor of love. Eva, a talented painter who had a brief modeling career when she was younger (“I hated it,” she says with a laugh), first saw the Hamptons when she was hired for a photo shoot in the 1970s. She recalls the moment when her car rounded the bend into East Hampton: She saw the quaint pond and then, a few blocks down, the windmill. “I grew up on the North Sea in Holland,” she says. “This was my environment. I felt like I was home.”

Shortly after, she and her husband stayed at the East Deck Hotel in Montauk, and eventually bought a small house in town that was “really cozy, with a tiny guesthouse in the back, a garage, an outdoor eating area and a big old tree in the middle,” Eva says. “Before leaving on the day we first saw it, I had already fixed it up in my mind. We loved that little house.”

By the early 1980s, the Ioosses had saved some money and decided they wanted to buy land. After an initially frustrating, fruitless search, real-estate agent Dick White showed the couple a parcel on the ocean. When they got to the property, they climbed a tree to observe the view. Eva came down from the tree “covered in ticks,” she says, but knew “this was it.”

Construction began in 1982, and the Ioosses moved in the following year. Eva, who describes herself as “a bit of a would be interior designer,” said she had “a very distinct picture” in her mind of how she wanted the house to look, and although two architects worked on the project, the interiors were completely her domain. “I felt like a kid in a candy store, designing and furnishing it,” she says. While the whitewashed rooms are perfectly appointed, with a distinct northern European sensibility (Eva loves all things Swedish), the effect is entirely personal. Their own artwork— Walter’s photos and collages and Eva’s botanical paintings—as well as ephemera picked up during their many travels, give the house a feeling of warmth and history.

“This place is our life,” Walter muses. “We love this town and the tight-knit community.” But despite the bucolic surroundings and what Walter describes as the “all-day lightshow” through their many windows, neither spends much time idly taking in the view. “We always have a project; the house is almost 30 years old and needs constant maintenance,” they say cheerfully—and in unison—looking as if the upkeep is anything but a burden.

Between her multiple gardens, rows of window boxes, the botanical paintings she creates in her serene studio and her two-and-a-half-year-old grandson, Parker, around whom “life revolves every weekend,” Eva has little downtime. (She halfjokingly calls herself the “estate manager.”) And yet she refers to her husband as the “busiest man on earth.”

Walter, who has spent the better part of four decades photographing top athletes, models and musicians, is probably best known for his work for Sports Illustrated. Shooting stories for the annual swimsuit issue for more than 30 years and immortalizing superstar athletes like Muhammad Ali and Michael Jordan, he still travels constantly and relishes coming home to Montauk. Here, when he’s not swimming in the pool (“He fought me about putting it in, and now enjoys it more than anyone in the family,” Eva says), playing golf at Montauk Downs, riding his bike or walking with Eva and their two dogs, Fanny and Flora, to nearby Cavett’s Cove, Walter retreats to his basement office, which he refers to as “the easternmost gallery on Long Island.” He’s not one for understatement: Among the many works hanging on the walls are photographs by Irving Penn, Neil Leifer, Annie Leibovitz, Henri Cartier-Bresson, Mary Ellen Mark and longtime friend and Montauk neighbor Peter Beard.

Years ago the Ioosses played a weekly volleyball game in Beard’s yard, a battle that moved to their own lawn after Beard and his then-wife, Cheryl Tiegs, divorced. “We drank a lot, and sometimes there was food and we listened to the Fine Young Cannibals,” Walter reflects. “But now we’re all too old to jump for the ball,” Eva adds with a laugh.

Their lust for life has hardly faltered. Painted on the wall of Eva’s airy studio is the phrase “Exuberance is beauty,” done in an elegant script evocative of the decorative writing in many classic Swedish homes. To be sure, Walter and Eva Iooss are leading an exceptionally beautiful life.

A version of this article appeared in the August 15 2011 issue of HC&G (Hamptons Cottages & Gardens) with the headline: Vantage Point.