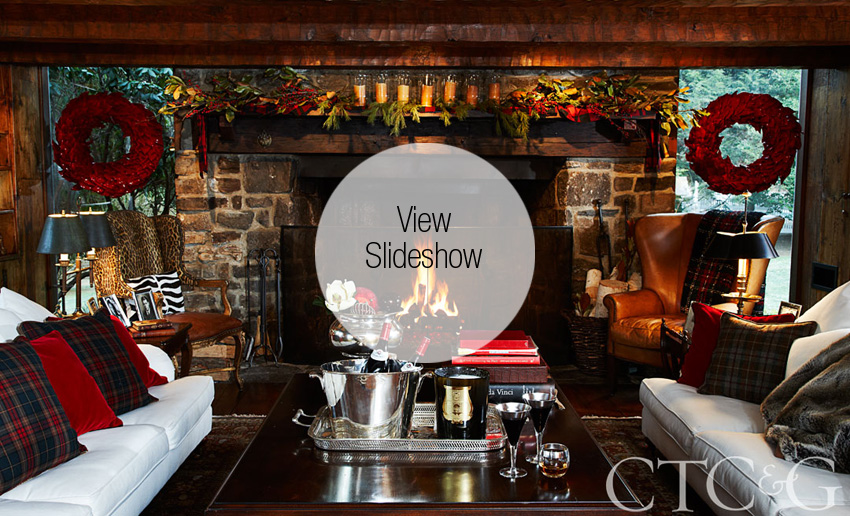 Nothing says Christmas in Connecticut quite like a traditional Colonial beautifully decked out for the holidays. From its snow-covered perch at the end of a long sloping driveway, Susan and Hank Oster’s 18th-century white clapboard home looks like something straight out of a winter’s tale—part Currier & Ives, part Holiday Inn. “It’s a great Christmas house,” says Susan, a New Canaan-based interior designer. “It’s a house people love to come to.”

Set on five acres with a pond and groves of birch and fir trees, the home’s cozy interior—with antique wood floors, low-beamed ceilings, and two enormous fieldstone fireplaces—is the perfect backdrop for Oster’s minimalist aesthetic. “It’s naturally decorative,” she says. “One doesn’t need to gild the lily.” During the holidays, she uses fresh greens and seasonal berries, burlap garlands, decorative glass balls, and splashes of red. “The house can’t take too much gilt and glitter. But it’s so dark you have to add elements of light. The obvious choice is red,” she says.

In the living room, one of the oldest parts of the house, Oster hangs a pair of red magnolia wreaths in the windows that flank the 200-year-old fireplace. “The modern wreaths in the modern windows really help cut through the antiqueness,” she says. A row of seven candles on the mantel, and red-and-plaid accent pillows on the white sofas add a festive touch, as do the silver serving pieces on the coffee table. “The reflection of silver is one of the greatest antidotes to a dark room,” she says. Nearby, the tree is trimmed simply but elegantly with burlap garlands, mini white lights and a few red birds among the branches. A string of Flicker Flame lights adds a touch of 1930s nostalgia.

It was love at first sight when Susan and Hank first saw the home on Wardwell Pond—nearly 10 years ago. With their son Jack, they had been living on a Marion Davies estate in Los Angeles, in an old carriage house that had been moved from Alsace Lorraine. When Hank’s job brought the family East, they knew they had to find something to equal their home’s rich history.

According to local lore, the Wardwell Pond house was either original to the property, or it was moved to its present site from New Hampshire. The Osters find elements of truth in both stories. “What’s surprising is how very old the house is,” says Susan. “You drive up and think, this is an old house. Then you walk inside and you see that it’s a very old house.”

Enchanted by the home’s austere New England feel, Susan says she was tempted to keep the interior décor to a bare minimum. “I wanted to put a nail in the wall and hang a towel on it.” She laughs. “But we had a lot of stuff.” Ironically, manyof their furnishings—antique pine tables and chairs—came from shops in Los Angeles.

They renovated in 2004, adding a master suite, a laundry room, and a garage with a gym above it, making the house “livable in a modern way,” she says.

The former keeping room, now the entry hall, still has the fieldstone hearth that dates from 1710. Downstairs, the original wood floors have planks up to 20 inches wide. They are so old that even wood experts aren’t sure if they’re made of oak, chestnut or pumpkin pine. The pine walls have darkened over the years and there are initials carved into the thick oak beams. Some of the oldest doors still have their original hardware.

“This house is full of stories,” Susan says. “For Christmas, it gives you the narrative. All I do is apply some sort of punch.”

A version of this article appeared in the December 2011 issue of CTC&G (Connecticut Cottages & Gardens) with the headline: Christmas in Connecticut.