Step Inside a Greenwich Colonial Revival 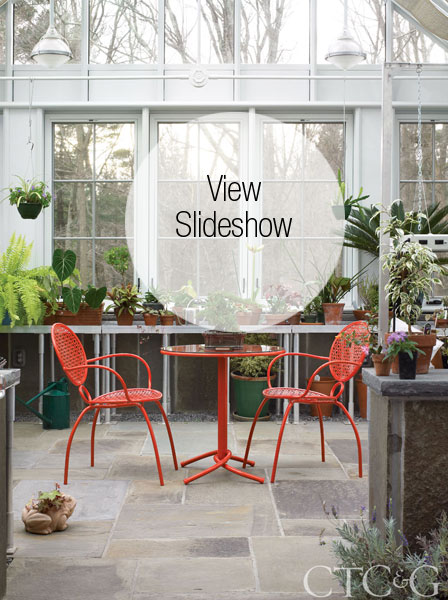 Architect Rob Sanders takes the business of historic preservation very seriously. “It’s a huge responsibility to keep old houses going, but there’s a richness to being part of that continuum,” says Sanders, who relished tackling the stately Colonial Revival homestead designed in the 1840s by renowned architect Theodore Blake. The current stewards of the Greenwich property, a couple in their fifties, were originally drawn to the structure’s quintessential Colonial charm and the tremendous street appeal afforded by a welcoming front porch and classic gable forms.

After residing there for 17 years, raising three children, and enduring the inconveniences that come with uncomfortably low ceilings, a dark kitchen and a general lack of connection to the 1.6-acre property, they decided to renovate the entire main house and an existing barn. “They knew the house had great potential but didn’t really know what they wanted to do,” says Sanders, principal of Rob Sanders Architects. “They relied on us to answer the questions that come with every preservation project: What is worthsaving? Where do you compromise? And what has to go?”

The architect had no trouble figuring out the latter and immediately set his sights on eliminating a structure on the back that was unsympathetic to the rest of the house. “It was basically a box with a flat roof that backed into the site and put the window sills at the level of the earth,” says Sanders. He envisioned a spacious, sun-drenched family room in its locale. “By elevating the new space, we got the floor level to grade and were able to capture views of the hidden garden beyond.”

Next to go were several unusable enclosed porches that made way for an extensive greenhouse. “The homeowner is a serious horticulturalist who grows her plants from seed,” says Sanders, who tucked a home office for her in between the two new spaces.

In the spirit of compromise, the architect kept the original work space in the adjacent kitchen but expanded the square footage to add a breakfast room and 16 feet of glass that includes two windows and four panel sliding doors that open to the terrace. “The exciting part of renovation work is using new elements like inserting openings to reactivate a space,” he says.

Making the “worth keeping” list was a dependency, an original subsidiary structure that housed a small room with a minuscule attic above that may have been the original entry. Removing the attic floor exposed a pair of eyebrow windows and created an almost perfect cube to serve as the new library. In keeping with the existing architecture, American white-oak paneled walls and cabinets with camphor burl accents were selected for the walls and cabinetry. Continuing the period theme are carved ellipse patterns borrowed from the neighboring living room and repeated as a stylistic element on the library walls and fireplace.

When it came to determining a color scheme and selecting furnishings, interior designer Dotsie Doran of Katherine Cowdin Interiors, allowed the stately architecture and the owners’ Oriental rug collection to guide her. “We chose pieces like the camelback settee, English-style open armchairs, and a tray table in the living room to go with the period of the house,” says Doran, noting the bold persimmon that distinguishes the family room was inspired by the rug. “We pulled that color out and used it in the window treatment fabric, and the painted woodwork and plaid fabric on the wingback chair just followed suit.”

The final “has to go” item was the barn. “It looked more like a two-car garage with a shed stuck on the back,” says Sanders. He replaced it with something more barn-like in form and appearance. In a nod to the past and similar to other barns in the area, the cedar-clad building is painted a dark green. Meanwhile the interior spaces address the homeowners’ current needs and include an office for him and a game room on the lower level for family gatherings. “My goal was to make both structures modern in use and flow of space, but connected to the past in form and materials,” says Sanders. “That’s the balancing act.”

A version of this article appeared in the March 2012 issue of CTC&G (Connecticut Cottages & Gardens) with the headline: Balancing Act.