Like his jewelry, Seiichi Takeichi’s apartment is both classic and contemporary. 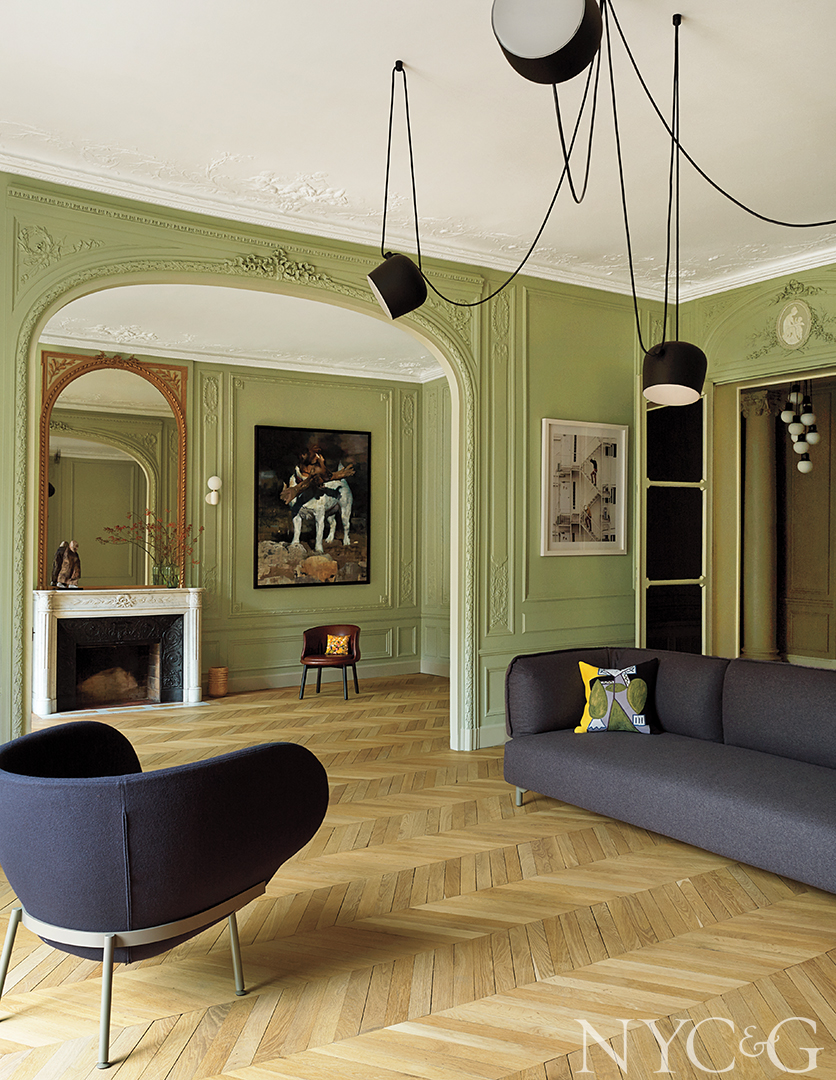 Imagine, if you will, a classic eight on the Upper East Side, but transplanted to Paris’s chic Seventh Arrondissement. Oh, and make the rooms bigger, the floors throughout a chevron-patterned parquet, and the view not a dim sliver of Park Avenue sky but a charming little park and a smattering of 18th-century hôtels particuliers. All this and more will get you the sumptuous new Parisian flat of Japanese-born jewelry designer Seiichi Takeichi and his French partner.

Designed in 1905 by the little-known architects Le Nevé and d’Hont, the building (it also has a twin next door) initially comprised vastly scaled full-floor apartments for the extended family of a wealthy industrialist from northern France. Each original residence clocked in at 4,000 square feet, although Takeichi’s floor was eventually split in two, and today his new digs measure around 2,800 square feet.

Having just moved to France after a lengthy stint in New York, Takeichi was smitten with the place’s exceedingly fine French bones, although the boiserie and plasterwork had been painted too many different shades, and the windows were groaning under the weight of voluminous draperies. An easy enough problem to solve: Now an artfully restrained palette of Farrow & Ball grays—from greige to French green—amplifies the dizzying detail, including intricately sculpted plaster medallions depicting cavorting children and carved clusters of musical instruments above a doorway, all impeccably restored. And each room has a working fireplace, too. “I’m looking forward to lighting the fires for the first time this winter,” says Takeichi, who holds a degree in product design from Parsons and pursued that vocation before switching to jewelry making. “It’ll make the apartment so cozy.” 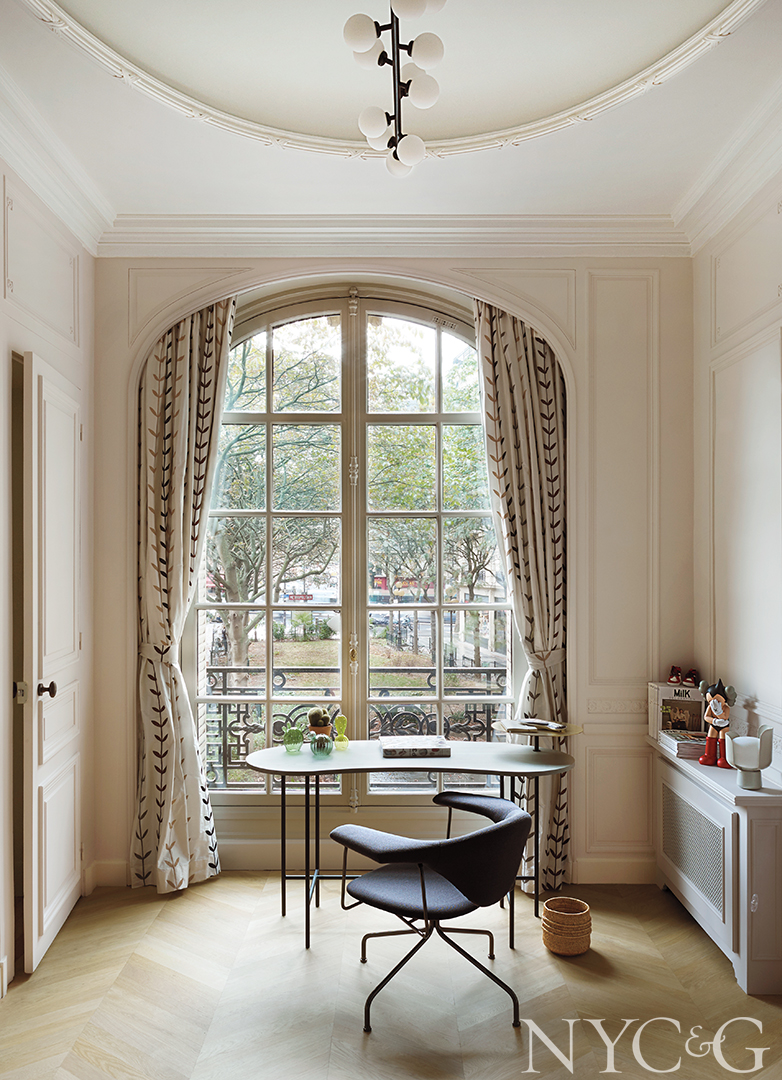 Takeichi’s office, which features a recessed oval ceiling, powder-puff mauve walls, and a delicate desk by Jaime Hayon for &Tradition, has the feeling of an intimate boudoir. He actually makes his jewelry in an atelier in the Marais, but he prefers to draw here, where he can “spend the day looking out the window and watching the people on the street below.” His made-to-order designs—mostly women’s rings, bracelets, and earrings—are 3-D printed and produced in silver, gold, and platinum in a process similar to the ancient lost-wax method. His early pieces spun a twist on classic pearls by pairing creamy white and lavender specimens with yellow gold. And his knot collection is a modern riff on the joints of a bamboo plant. 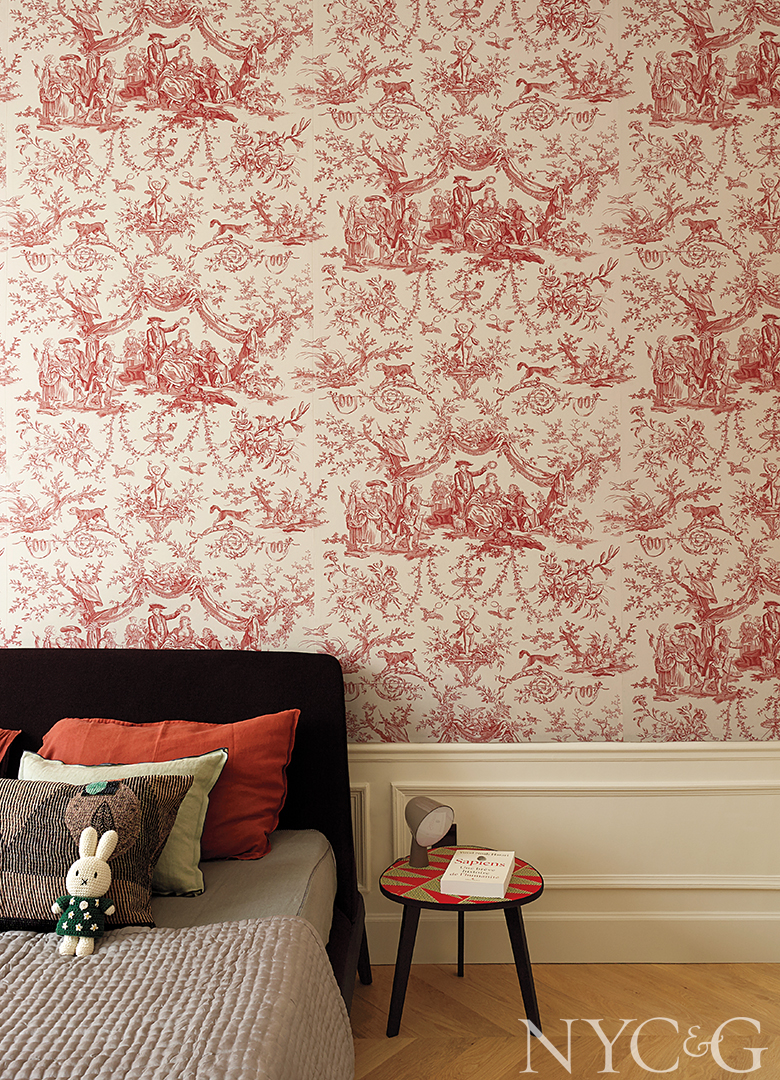 Like his jewelry, Takeichi’s apartment is both classic and contemporary. “We wanted to retain the French essence, but furnish the rooms with modern pieces that would bring the place up to date,” he says. And while the rooms are decidedly demure, they don’t lack for whimsy, particularly the bedrooms, each of which features a single toile-covered wall. The master bedroom’s traditional red-and-white toile was installed by the apartment’s previous owners, whereas the guest bedroom boasts a hand-drawn pattern with a lyrical Don Quixote theme.

The orderly taupe kitchen is amped up with cerulean blue cabinetry, hexagonal terra-cotta floor tiles, and brilliantly patterned Maison Gatti bistro chairs designed by Philippe Hurel. Even in the master and guest baths, Mutina tiles by design doyenne Patricia Urquiola bring textural interest. And carefully curated lighting pieces from Flos, Established & Sons, Areti, and other vendors beautifully illuminate all the rooms, although, this being the City of Light, they get a boost from a suite of giant French doors that open to Juliet balconies graced by delicately filigreed ironwork. Modern and minimal the apartment may now be, but it will always remain French to the core.