Step Inside a Light-Filled Bridgehampton Colonial 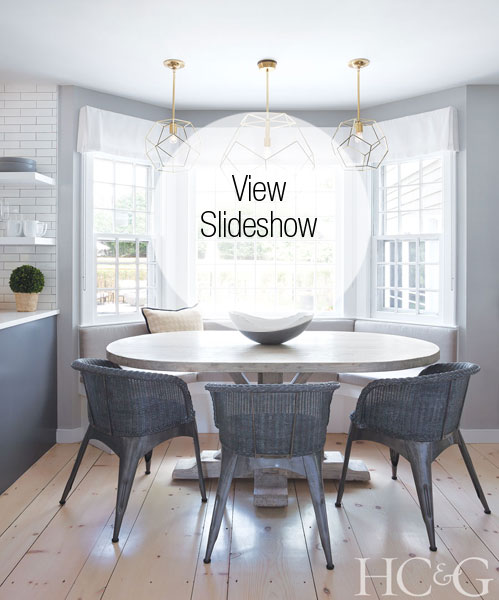 Client referrals are important in any business, but in the interior design world, they’re crucial, as customers often come to decorators via word-of-mouth. Designer Darci Hether has hardly had any difficulty garnering a base of fans who appreciate her clean-lined, comfort-minded aesthetic. Even so, it didn’t hurt matters that the decorator’s first big client kept a stack of Hether’s business cards under the centerpiece on her dining room table, just in case friends asked her for the name of the person who designed her interiors.

“She had people over to her house all the time, and constantly referred me,” marvels Hether, who launched her firm in California in the late 1990s, but had always been eager to give the East Coast a try. By spring 2002, word-of-mouth had helped her to line up three projects in New York, and the deal was done.

It didn’t take long for New Yorkers to warm up to the Alaska native’s affable manner, including a young Manhattan couple who hired her to design their city digs. When they acquired a second home, in Bridgehampton, they called up Hether once again. “They said, You know how we live and what we like to do, so we’re giving you free reign.”

Hether had designed the couple’s apartment to be very chic and almost moody aesthetically, and she was determined to make their East End retreat opposite in style. “They wanted the house to be super relaxed and light, a place where guests wouldn’t be afraid to sit on anything,” says the designer, who kept colors and materials neutral, often employing black to anchor lighter hues. “I gravitate toward streamlined palettes that can be built on with judiciously placed, colorful accessories. I don’t think everything has to have a wow factor.”

Once Hether’s clients purchased the four-bedroom, three-and-a-half-bath Colonial, the path to decorating the place was a short one. “We did a walkthrough, I made a presentation, and we started pretty much out of the gate,” says the designer, who took down plain paneling and baseboard molding and put up fresher replacements. The kitchens and baths were gutted and reconfigured, and in the master bath, Hether re-routed the plumbing to install his-and-hers vanities and replaced a stall shower with a big walk-in one.

The designer worked with the clients to decide on the larger pieces of furniture, as well as the flooring, but everything else was of Hether’s choosing, except for “coffee table books, since those are more personal,” she says. Keeping the nearby beach in mind, she used an indoor/outdoor fabric from Holly Hunt on all the furniture. “It’s great, and so beautifully made.”

Money was spent where it made the most sense—on cabinetry and seating. “My clients are big entertainers, so all the seating pieces needed to be good quality,” says the designer. But even the seemingly less important stuff had to pass muster with Hether, now the trusted go-to on the second time around with the couple, who floated nearly everything by her, down to dinnerware choices. “The collaboration was so fun from start to finish. They would even send me e-mails asking, ‘Is this Darci-approved?’”

A version of this article appeared in the June 2016 issue of HC&G (Hamptons Cottages & Gardens) with the headline: Clean and Serene.