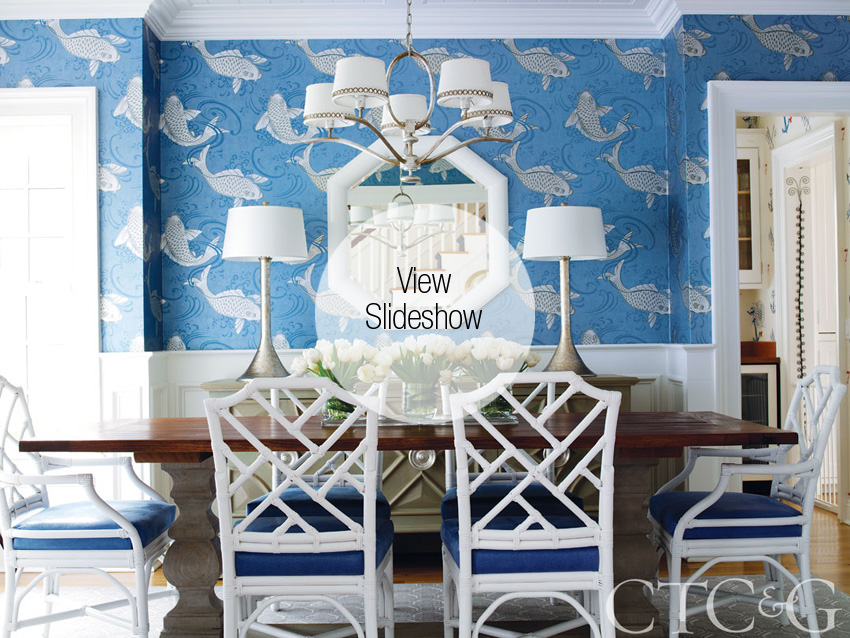 The lulling rhythm of water lapping against a dock, the clink of sails against the mast, the shadow of a Gambrel rooftop on the lawn: Ahoy! A little piece of Martha’s Vineyard has washed up on the shores of fairfield county, and the inside of this shingled dockside house is just as seaworthy as its exterior.

The Vineyard vibe is no accident. This port of call belongs to a couple who love spending time at their second home on the rocky Massachusetts island. Their main home in Connecticut is the ultimate souvenir of their beloved island, the site of their wedding some years ago. The house predates those seaside nuptials; before the two were married, the husband designed the house with Patrick Ahearn, the architect known for historically based homes that dot the Vineyard. With a view of the inlet—and the family’s boat moored outside in season—the house brings to mind old coastal captain’s houses, including the requisite carved whale above the front door.

Once their ship turned course toward family life, the husband and wife turned to Norwalk-based designer Bobbi Stuart. “Bobbi’s kids and I grew up together, so we’ve known her for a long time,” says the wife. “I decided to collaborate with her because she’s lovely to work with, always upbeat and easy going. She really listened to what we wanted and was not ‘formulaic.’”

What the couple wanted was something casual and serene, with a coastal feeling reflective of their love for the Vineyard. As Stuart prepared to chart her design course, she had lots to work with. The “big, white wonderful spaces” already had crisp wainscoting and a floor plan with a graceful flow. “The bones were there,” says Stuart. “They just needed me to color in the spaces.” There was no question of which colors: “You had to know intrinsically that red, white and blue would be the right direction.” A wash of blue leads the way into the home with the periwinkle of a Stark carpet in the foyer and running up three flights of stairs, the walls of which are lined with the husband’s collection of ship paintings. The dining room is set adrift in blue wallpaper featuring koi carp in a swirling pool, punctuated with a white porthole-like mirror and crisp white latticework chairs upholstered in faux snakeskin vinyl as durable as it is chic. “Nothing was precious in terms of the fabrics,” says Stuart, citing the couple’s focus on family living and their two young children. “Everything is honest and welcoming without appearing to be ‘done.’”

That sense of welcome extends to the layout of the house. There is no cloistered formal living room. Instead, the family gathers in an enormous family room extending off the bright white kitchen and anchored with a stone mantel. Deep swivel armchairs upholstered in a blue denim and punctuated with pillows in a ship print swing to and fro to face dinner preparation in the kitchen, a roaring fire, kids at play or perhaps an impromptu music performance on the piano or a set of guitars.

Those instruments were originally slated to live in an upstairs music room, but priorities changed for that space when the kids arrived. “We had talked about turning it into a playroom,” says the wife, “but I hadn’t really decided on anything to make that happen.” When her husband encouraged her to join a girls’ getaway with old college friends, “it was the first time that I had left our daughter for a night,” she says; unbeknownst to her, a surprise was in the works. A few days prior, her husband had ordered tiles for the music room’s floor. “Once my wife was gone,” he says, “I packed up my music gear and laid down the tiles. My daughter and I were having a blast on the new floor. Taking it a step further, I taped off the ceiling with a friend, and he painted the ceiling stripes, while my daughter and I went to get some bins, buckets, ottomans, stuffed animals, books and toys!” The shipshape result: A cheery turquoise-and-white striped ceiling brightens navy walls and a cozy upholstered window seat that rocks the boat.

A version of this article appeared in the April 2013 issue of CTC&G (Connecticut Cottages & Gardens) with the headline: Shipshape.