Step Inside a Modern Waterfront Home 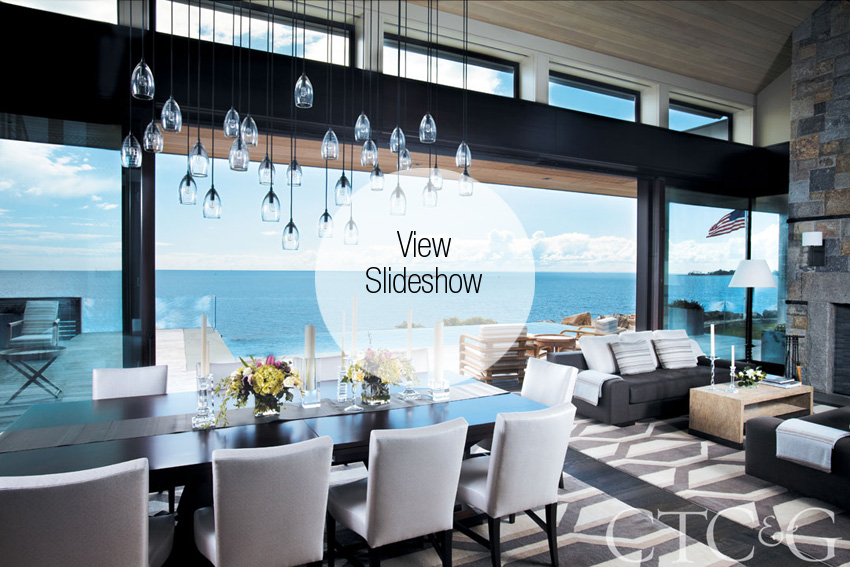 “Because the ceiling is angled, we did lots of drawings to ensure that when the pieces were suspended, they would all drop in the right spot,” says Liotta. “Everything was perfect until someone opened the door and the whole thing started moving in the breeze. Everyone gasped, but fortunately the swaying pieces just missed each other.”

Handling soft coastal breezes turned out to be minor compared to the architectural challenges of factoring seasonal gale force winds, and the daily intensity of sun, sand and water into the redesign of the property. “Designing for the wind mandated lots of hidden heavy steel to brace the structure, and we used an upscale, wind-resistant German window and glass system with a slight tint to the glass to combat seaside glare,” says architect Laura Kaehler, who collaborated with project architect Richard Basic.

With a blended family that includes five grown children and 12 grandchildren, the homeowners wanted their residence to do double duty as a comfortable gathering place and formal entertainment space. “It had to go from cozy to dressed to the nines with ease,” says Basic, who along with Kaehler replaced the multiple levels and chopped up spaces of the original structure with a more flexible, open floor plan.

Central to the dual functionality is a kitchen that opens to the rest of the house when the offspring visit, but includes two sliding doors with strategically placed frosted panels that close to conceal the catering crew when formal dinner parties are happening in the adjacent dining room. “The doors also reflect the view, so people facing them have something nice to look at as well,” says Basic.

In answer to the owner’s request for easy indoor/outdoor movement, the ipe deck was raised to the same level as the interior floors. “When it’s party time, they just throw open the doors and flow from the dining room to poolside,” says Kaehler, who, in an effort not to interrupt the incredible seaside views, color-matched the inside of the edgeless swimming pool to the water of Long Island Sound.

Meanwhile, the interior designer called on the gray tones of the stonework and the rich mahogany woodwork as inspiration for the flooring. “It took many steps, but we finally got the striations in the oak stained just right to reveal both the warm brown and cool gray that would set the tone for the entire house,” says Liotta, who topped the surface with a show-stopping wool rug. “The strong graphic pattern is like a fabulous modern painting,” she adds.

In response to what she calls the “star of the room,” everything else is intentionally understated. The low-slung chocolate brown living room sofas flank a custom grained oak coffee table, and the striped pillows and throws are a subtle nautical nod. In the dining room, two square tables with side leaves can be separated to create intimate dining for six, or pushed together and opened to accommodate large gatherings. And ever mindful of the family-friendly requirement, the chairs are topped with a synthetic, linen look-alike that can be wiped clean with a sponge.

Along with the warm hues, texture and form play a role in keeping the crisp architecture from turning cold. “In such a modern space, it’s important not to let things get too hard-edged or angular,” says Liotta, who selected rounded-back bar stools to complement the swoop of the leathered granite kitchen counter. Touches like the horsehair-weave wall covering in the master
bedroom and striated stone in the master bath shower add to the desired effect.

“By introducing just the right amount of color and texture, we succeeded in striking the perfect balance,” says the designer. “The most consistent comment we hear is how warm and inviting it feels in here.”

A version of this article appeared in the November 2012 issue of CTC&G (Connecticut Cottages & Gardens) with the headline: Sound Thinking.

An Inside Look at Giorgetti's Inspired & Innovative 2021 Collection