Step Inside a Modernist Family Home in Norwalk 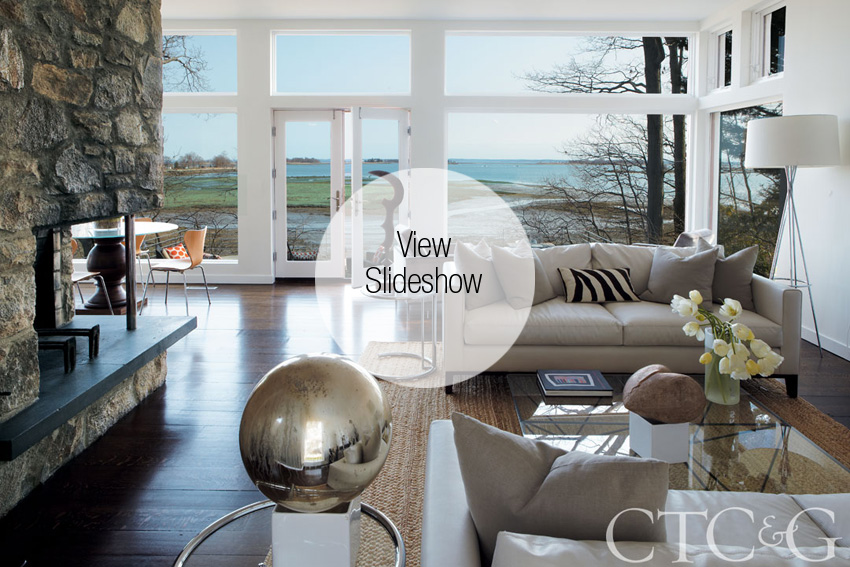 Tom Balsley was a hardcore New Yorker with a strong streak of country boy when he decided, more than 20 years ago, that it was time to find a way to escape. “I was in an obsessive search for a waterfront property within an hour of New York City,” he says from his Manhattan office, where he works as a commercial landscape architect. The only snag? “I had a beer pocketbook and Champagne taste.”

Tom mentally collected a bunch of sites and houses between Stamford and Westport, and finally saw a house—not for sale—that seemed perfect. A few years later, an ad in the New York Times caught his eye. Same house. This time for sale. “It was fate,” he says.

In 1989, the house was a concrete block with a big overhang, the inside “dark, dank, crappy,” but Tom saw potential in its environment. “I wasn’t buying a house,” he says. “I was buying a site.” It was, and is, an incredible site located right up against the Norwalk tidal inlet in the neighborhood of Village Creek. Built after World War II, this 67-house planned community of modern homes embraced principles of equality and religious and racial tolerance; it was recently recognized by the National Register of Historic Places. Those principles translated into a place that had, as Tom puts it, “a good vibe.” He met his wife, Sarah Wappler, in town. She’s a landscape designer who had gone to Yale and come back to Norwalk to raise her family because of the magical childhood she’d experienced there.

The house’s first renovation came long before Tom and Sarah got together. At that time, Tom just made basic renovations but didn’t add on (that beer pocketbook kept intervening). The second time, he had a little bit more of a bubbly pocketbook and 20 years of design experience. There was also the matter of a suddenly enlarged family, following his marriage to Sarah.

“The second [renovation] was a combination of me really doing what I wanted to do twenty years ago, but also an expansion program because suddenly I had a family,” he says. “It’s actually the third life for this house.”

Despite this merged-family expansion—Sarah had three children from a previous marriage and then the couple had one of their own—Tom was adamant that the house keep its existing footprint.

While the relationship of house to water is essential, Tom explains that the power of the site is much more than that. There are the views, yes, but also a sweeping marsh and rocky outcropping, and it was this combination that Tom wanted to protect. The house is tucked into a steep and rocky slope; to expand it would have required massive excavation and a bunch of new walls, fundamentally changing the quality of the landscape. “Since we worked within the footprint, it required going up,” Tom says. The architect added roughly 1,500–1,800 square feet to the entire layout, partially by going up and partially by turning the lower level’s separate apartment into a contiguous part of the house. “We turned a two-bedroom house with an apartment into a five-bedroom house,” he explains.

The shift was more than just architectural, though. “I’m a modernist, so all the rooms were clean and spare and almost pristine—everything was sort of museum-quality,” the former bachelor remembers.  “And then I began to learn about a household with three, and then four, children, and what that really means.”

Working with Sarah helped Tom balance his desires for high modernism with the realities of a chaotic family life. For example, she introduced him to the need for a mudroom, a liminal space for the storage of shoes and boots and multiple sets of coats. Together, they came up with the idea of a sanctuary of a master suite, perched at the very top of the structure, a place where, Tom says, “we could truly escape.”

There’s a spirit of connection and open flow that sweeps throughout the house. And at its core is the kitchen, which Tom says operates as a “knuckle or joint” between the two square boxes that comprise the communal living spaces and two of the children’s bedrooms.

“There was so much pushing and pulling and shoehorning,” Tom says of the tremendous transformation he and Sarah—and the rest of the family—brought the house through. “It’s really a miracle we were able to pull this off.”

A version of this article appeared in the June 2011 issue of CTC&G (Connecticut Cottages & Gardens) with the headline: Sound Decision.