Step Inside a New Canaan Home Infused with Color 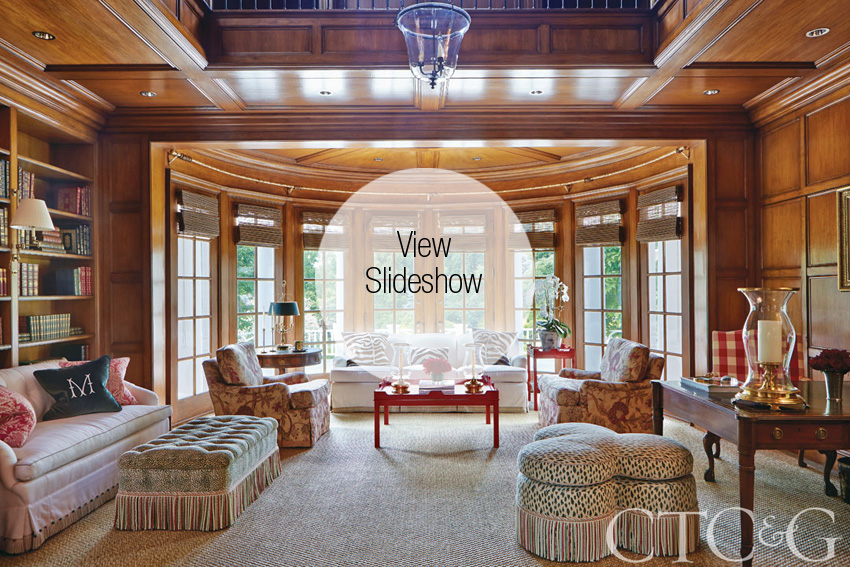 With a resume that includes supervising ad campaigns for marketing gurus Ogilvy & Mather and more recently overseeing all of Citigroup’s brands, you’d expect Mayling McCormick to be someone who knows what she likes and isn’t afraid to take control. So it was no surprise when she decided to add interior design (more as an avocation) to her impressive list of accomplishments and imprint her impeccable style on the rooms of her New Canaan home. “Design is my true passion,” admits McCormick, also known in local society for having chaired the Greenwich Historical Society Antiquarius and the Sacred Heart Fashion Show.

Upon approach, the home in question, a venerable estate purchased by McCormick and her husband, William, three years ago, looks like a structure frozen in time. With its meticulously pruned trees lining the gravel driveway, classic portico, and Palladian windows, it would be considered a Federal-period architectural landmark but for one small detail—it was built in 1989. The home’s original owners fell in love with Homewood House, a National Historic Landmark at Johns Hopkins University, and built a near replica of the 1801 residence in Connecticut.

But it wasn’t when it was built that attracted the McCormicks; it was the home’s perfect proportions that were a primary attraction. “It has celestial symmetry,” says McCormick about the home’s 10-foot ceilings and balanced layout. “We moved into a truly magical home with the most incredible library you’ve ever seen.”

The interiors were in relatively good condition but overall “the house was uneven and tired.” Her intent, she says, “was to take away a little of the grandeur and opulence and make it a house that works for today. The kitchen and bathrooms hadn’t been touched since 1989.” For the structural considerations, McCormick hired architect Louise Brooks, who had renovated the home’s library for the previous owners. Originally one floor, Brooks broke through the ceiling to create a two-story space lined with rich butternut wood shelving and cabinets.

Turning her talents to the kitchen, Brooks gutted the existing space. “I revised the floor plan by flipping the locations of the original work area and breakfast nook and added floor-to-ceiling glass,” says Brooks. McCormick refers to the straightforward design with its classic Shaker style white cabinets and gray mist granite counters as her Giorgio Armani kitchen. “With shades of gray, white and black it’s simple, timeless and tailored,” she says.

For her part, McCormick began by making a striking opening statement in the entry where she paired a bold red modern painting with a garden bench. “The previous entry was tan, brown and gilt and it was all too formal,” she says. “The painting, bench and leopard carpet on the stairs are meant to signal this house is a little different than you would expect.”

That concept continues in the living room where another red painting, floral print chairs, a Chinoiserie desk and a tufted ottoman rimmed with two different trims are a composed series of surprises. “I like dressmaker details,” says McCormick about the latter. “It’s like a finely tailored Chanel suit.”

In the library, a red Oomph coffee table supplies “a little moment of joy,” and armchairs topped with luscious Bennison linen infuse the space with elegance and sophistication. “Don’t fall in love with Bennison linen,” warns McCormick. “It’s terribly expensive but there’s nothing like it.”

Throughout the house, flourishes of red and orange emerged as the connective tissue. In dining room, striking Farrow & Ball wallpaper brightens the home’s most traditional space where the gesso ceiling medallion and grand chandelier were left in place as nods to the past. Even in the master suite, largely defined by calmer shades of blue and white, pops of red pepper the floral prints above the bed.

By the time she was done, McCormick’s hand was evident everywhere. “I tried to improve things and make the house more gracious,” she says. “We got rid of the old Colonial trappings and imbued it with a youthfulness and modernity more in keeping with 21st-century life.”

A version of this article appeared in the February 2016 issue of CTC&G (Connecticut Cottages & Gardens) with the headline: Remaking History.