Step Inside a Photographer's Peaceful Wainscott Home and Studio 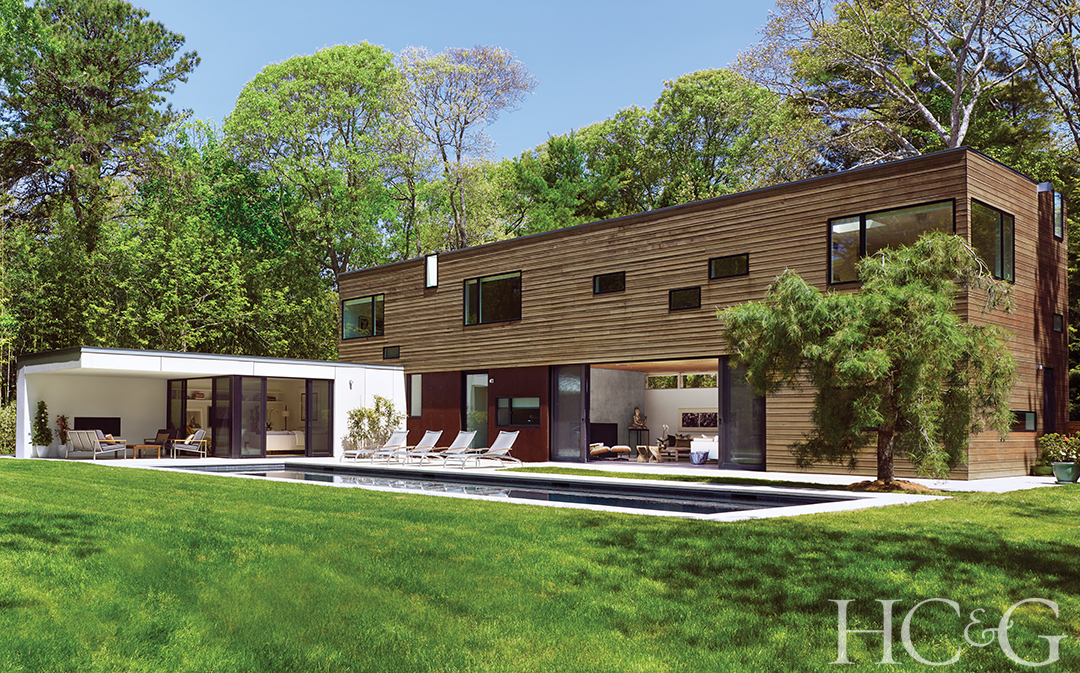 Michael O’Neill and his wife, Bia Setti, had a rare vision for a house in the Hamptons: something simple. O’Neill had been coming out to the East End since the 1970s and “didn’t like the traffic even then,” he says with a laugh. But after enjoying country homes in other regions, they continually felt the pull of the Hamptons. “Since she’s Brazilian, Bia decided she wanted to go to the beach more than I wanted to go to the mountains.”

In 2006, the couple found a shy acre in Wainscott and embarked on building a four-bedroom house with a pool and art studio. Collaborating with architects Jared Della Valle and Andrew Bernheimer (both of whom now work separately), they created what O’Neill describes as “not a super-opulent house, but one with a sense of peace and beauty about it.” Gently scaled rooms embrace the outdoors, with generous sliding glass doors and windows often open to the elements. The public rooms and a guest suite occupy the first floor, and three bedrooms, including the master, make up the second story. Red cedar siding visually ties the main house to the pavilion-like studio. 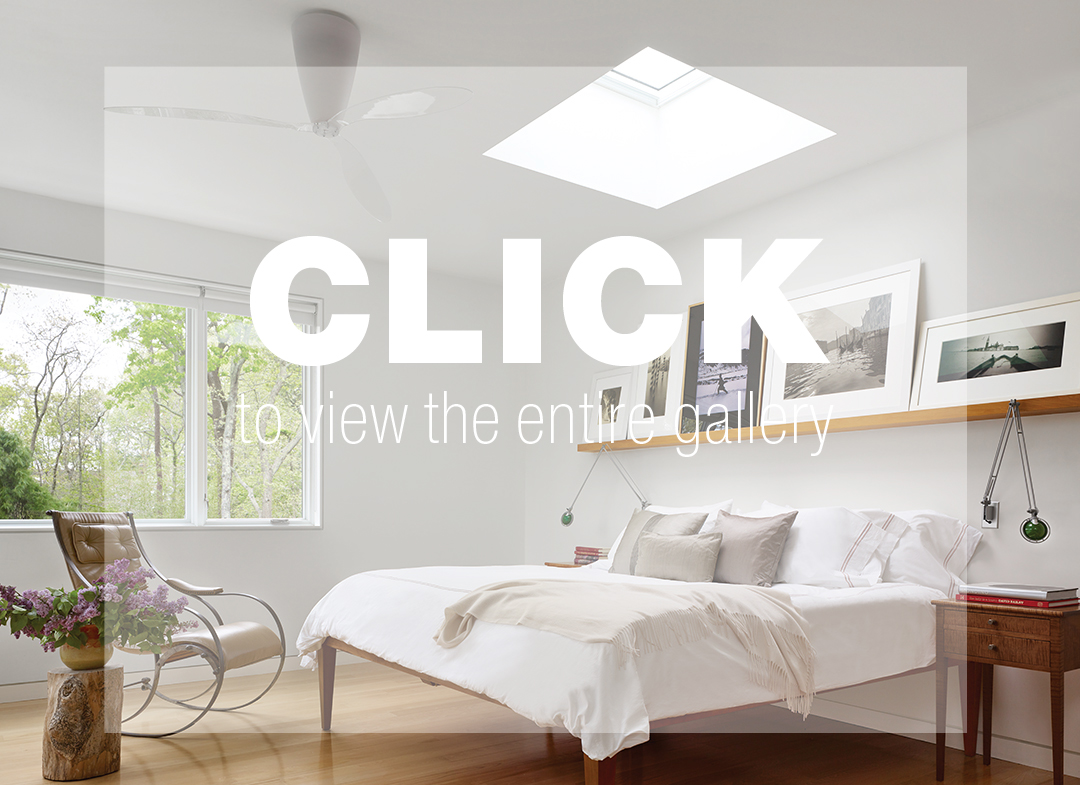 O’Neill’s career as a photographer spans 53 years, from commercial work to a series of portraits of U.S. presidents to a global study of yoga that culminated in the coffee table book On Yoga: The Architecture of Peace (Taschen), which is now a movie on Netflix produced by Setti. Trained by the masters Hiro, Penn, and Avedon, he has published his work in Life, Vanity Fair, The New York Times Magazine, Rolling Stone, The New Yorker, and Esquire, among other titles.

Just as O’Neill’s portraits keep artifice to a bare minimum, so does his home. For him, it was a natural evolution. “Anytime you design an image for the camera, you are putting together a series of visual elements,” he says, adding that he envisioned the view from any point in any room as a picture. “Anytime you are looking through a window, you are framing nature.” A child of archaeologist and anthropologist parents, he is also highly attuned to the plant world and mapped out all the landscaping, down to placing each tree and installing a vegetable garden.

Setti, a fellow photographer who has vast experience shooting interiors, introduced the all-weather lifestyle of her native Brazil to the project. “When we started with the design,” she recounts, “I spent the summer coming to the site and analyzing the angle of the sun.” She knew exactly what she wanted, and even cops to driving the architects crazy with her idea to cantilever a portion of the house over the open-air seating area. “There were so many beautiful houses nearby, but they were so cold, and we didn’t want that. We wanted a house that was warm, easy to maintain, and fun to hang out in during both summer and winter.”

As for the interior decor, “We did as much as we could, as beautifully and tastefully as we could, within budget,” O’Neill says, surveying the kitchen’s chic mix of Ikea cabinetry, Wolf stove, and hand-picked marble countertop marked by an artistic “X.” Architect and designer Emanuela Frattini Magnusson, with whom they worked in New York City, found the distinct pulley-style lamp above the welder’s dining table in Italy, and a coffee table by local artist Eric Fischl graces the den, next to a Saarinen Womb chair that O’Neill uses for daily meditation. Both he and Setti think of the concrete floor as a “happy accident”: Disliking it once the concrete had been poured, they decided to sand it down, revealing the composite stones.

O’Neill’s photographs hang throughout the house, including images from his “Zoobabies” series, travels to Venice, and his study of and immersion into yoga and Eastern spirituality, which began after he had neck surgery in 2000. “When I came out of the surgery, my right arm—my camera arm—was totally paralyzed,” he recalls. “A neurologist looked me in the eye and told me I would never use it again. I learned how to meditate to cope with the fear, and in retrospect, I can say I made some sort of subconscious decision not to be handicapped.” A hydro-therapist helped him recover the use of his arm, and a yoga practice that began as an effort to heal the nerves evolved into a deep spiritual passion. His photo session with the Dalai Lama, he remembers, “was one of the most amazing sittings. It was almost as if there was an energy field of pure spirit, a radiant energy that could be absorbed.”

O’Neill is certified in Kundalini yoga and sometimes hosts yoga events in the studio at the back of the property, an expansive structure oriented to take full advantage of natural light. His newest photographs of local stones, large abstracts depicting rocks found on long walks as spiritual bodies, line the walls. Across the room, other stones—namely, the Rolling Stones—represent his eclectic musical tastes, Sticky Fingers being just one of a formidable stack of vinyl albums by favorite artists ranging from Beethoven to Glenn Gould, all played on a turntable.

The studio’s lower level contains archives of negatives of O’Neill’s vast collection of work, from a contact sheet of a devilishly handsome Warren Beatty to a large-scale image of Orson Welles to panoramic landscapes (think pre–iPhone app). “Talk about energy,” jokes the photographer, who attributes his successful career to “a sincere attempt to see what is true, rather than forcing myself and my personality into an image. It’s a desire to see who somebody is, and where their soul is.” One of his most memorable moments was photographing Richard Nixon. “I grew up in the flower power years, so you know how I felt about Nixon. But you have to let go of preconceived notions. He was one of the most gracious, interesting, concerned human beings, and when I saw the first images it brought me to tears because I realized he was a human being.”

That deep connection to the human spirit and keeping things simple seem to have played out beautifully for O’Neill and Setti at home in Wainscott. “What makes you unhappy is never-ending desires,” says a yogi in Setti’s film On Yoga. “Limit the circle of your desires, and you can get satisfaction.

A version of this article appeared in the July 1, 2018 issue of HC&G (Hamptons Cottages & Gardens) with the headline: Vision of Love.