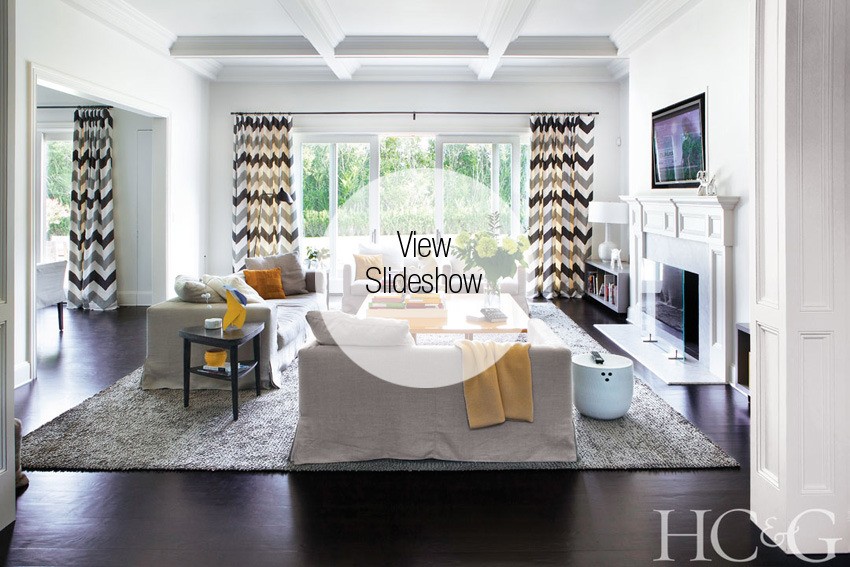 Carlos Otero could hardly conceal his surprisewhen he first saw the house his clients Christine Stanton and Jean-Michel Wasterlain had bought in Bridgehampton. The architect and interior designer had previously worked on the couple’s minimalist, modern art–filled Meatpacking District condo, and this house was its diametric opposite: a Hamptons traditional overflowing with gables, shingles, shutters, wainscoting, and white-painted paneling. But Otero soon realized that it all made sense. “The idea was to strike a perfect balance between modern and traditional,” he says.

This push-pull begins the moment you walk through the front door, into an entryway with a soaring ceiling and traditional staircase. “They didn’t want a big chandelier, which would be expected,” says Otero, a Buenos Aires native who now lives and works in New York. Instead, he installed inexpensive paper lanterns from Chinatown with the help of bright yellow extension cords from Lowe’s. The especially high ceilings made hanging the lights a daylong job. “It was very complicated,” Otero recalls. “But they create a great effect. They move slightly when you open the door, so it’s like a mobile.” Suspended above an Yves Klein–blue sculpture and a giant yellow pouf, they complete what Stanton describes as “a very playful set of shapes and volumes—just what I wanted for a beach house.”

“You walk in and see the contrast—and you know the people who live here are very cool,” adds Otero, who designed the sculpture himself, looking to add “a block of color with some texture.” The entryway’s palette—white and gray, with pops of blue and yellow—continues throughout the house for “a muted and peaceful feeling, with bright, lively touches.”

Otero describes Stanton, a former board member of the Dia Art Foundation, and her husband as “art lovers who have done the grand tour of all the galleries and art shows.” Accordingly, the house is packed with modern art: Photos by Chuck Close and Robert Longo share wall space with contemporary light installations and museum-quality sculptures.

Given their minimalist tendencies, Stanton and Wasterlain insisted upon simplicity. They wanted a home that would make adults and children of all ages feel welcome, blue-chip art notwithstanding. The couple, who now work in real estate and also own a home on Maryland’s Eastern Shore, have three grown children between them, and one of their goals “was to establish a home base for multiple generations of our family to congregate,” says Stanton. “This house had great bones, but it only became a real home once Carlos designed the interior.”

A few weeks after it was completed, Stanton’s then-college-aged son “announced that he was moving in with his two roommates for the entire summer. The house was filled with active boys and beautiful girls, including my husband’s daughters and their friends, and both our extended families and their friends.”

To accommodate the masses, Otero designed welcoming, colorful guest rooms with a “simple, graphic feel,” though everyone tends to congregate outdoors around the pool, which has an L-shaped bluestone surround. “The kids and parents have their own separate, well-defined areas,” Otero says, with two big lounge beds for the adults and six chaises for the children. “They are together, but also not together.”

“I come from a large, boisterous, fun-loving family,” says Stanton, “and the silence that comes with being an empty nester was not a good fit for me. This house solves that problem, and for that, I thank my husband and Carlos!”

A version of this article appeared in the June 2013 issue of HC&G (Hamptons Cottages and Gardens) with the headline: Contemporary Romance