Step Inside a Rustic Fairfield Farmhouse 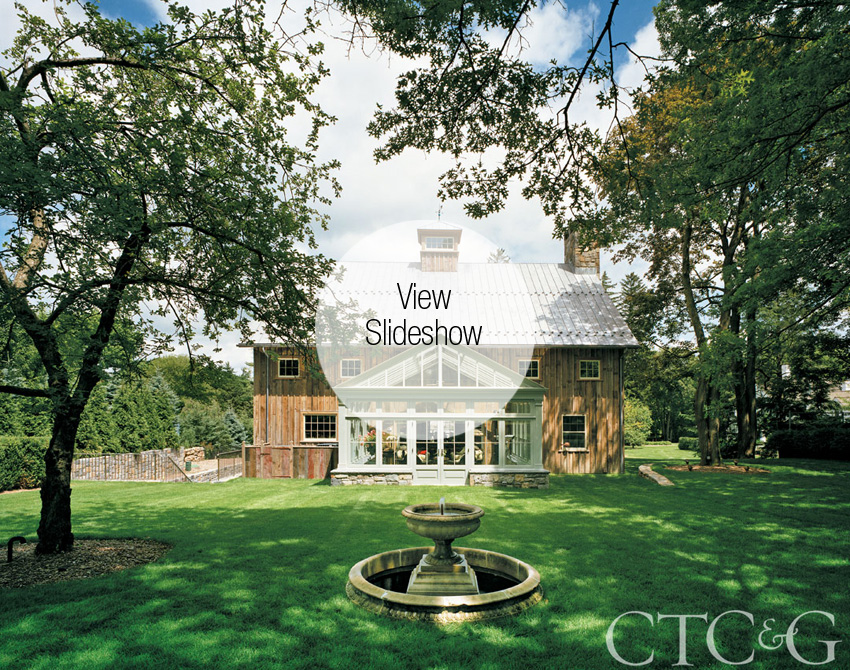 It wasn’t that long ago that building a barn involved corralling your friends and neighbors for a potluck and a barn raising. Today acquiring one of these iconic structures may be just a Google search away. At least that’s what architect Doug VanderHorn discovered when his clients requested an antique barn to serve as a rustic setting for entertaining on their six-acre Fairfield County estate. “I used the Internet to search for barns for sale and found several companies that specialize in rescuing old barns,” says VanderHorn, who hit pay dirt at heritagebarns.com. “When you find the right structure, the purchase price includes taking the barn apart, fumigation, shipping and reassembling it on site.”

In his case, the perfect match, an 1860s model, was located on a farm outside of Albany, New York. “We wanted a barn from the same time period as the original early 1800s Colonial where the homeowners reside,” says VanderHorn, noting the owners purchased the property next door and took down a dilapidated house and an unsalvageable barn to make way for the soaring timber-frame structure. “The homeowners took one look at the pictures and were ready to buy it. But we insisted on a site visit to make sure the timbers had great character.”

With the condition issues settled, VanderHorn and project architect Daniel Pardy faced the challenge of accommodating the building to its new locale. “The main open space had an exposed lower level big enough to drive a tractor into,” says Pardy. “But the plans for the great room called for it being a few steps above grade, so we omitted the original framework of the lower level and constructed new basement walls onto which the barn was placed.”

That maneuver left 3,100 square feet at their disposal, which the architects handily shaped into an open sitting and dining area. Kitchen cabinetry was constructed on-site from reclaimed pine, and guest quarters were tucked into a balcony above the kitchen. Not so easy was dealing with 32-foot ceiling heights. “It’s not common to have so much volume in a residential structure. And you don’t realize how dramatic the space is going to be until it’s all enclosed,” says VanderHorn. “Lighting becomes a real challenge because that much wood really absorbs light.”

In response, large arch-topped windows flank the massive stone fireplace, and a series of strategically placed windows and a cupola coax additional natural light into the expansive room. In lieu of track lighting, a series of low-voltage fixtures built into the center beam illuminate the timber framing.

Further brightening the space is a unique plaster wall finish suggested by interior designer Linda Shockley. “Because hay is typically stored in barns, I had the artisans mix hay into the plaster, which created a wonderful texture,” says Shockley, who worked with the owners to establish an ambience that incorporated their sophisticated taste while honoring the history of the rustic surroundings. “They are world travelers and had things like a long harvest table and a set of antique English chairs they wanted to use.”

The original tapestry upholstery on the chairs drove the selection of luxurious woven fabrics for the reproduction ratchet sofas and the striped velvet that tops the club chairs in the main sitting area. “Beauty was a key consideration, but durability was equally important,” says Shockley. “Early on we dubbed the project ‘the party barn,’ so whatever we chose needed to be comfortable and stand up to wine spills.”

An intentional counterpoint to the warm woods and rich colors is the new conservatory. A predominantly glass structure, it provides overflow entertaining space, a connection to the gardens, and reinforces the barn’s architectural simplicity. “In order to maintain the barn precedence, there’s an intentional lack of detail on both buildings,” explains VanderHorn. “Our intent was to have the good feeling of barn, not something that was converted into a house.”

A version of this article appeared in the March 2013 issue of CTC&G (Connecticut Cottages & Gardens) with the headline: Barn of Ages.