Step Inside a Southampton Cottage with a Clean White Palette 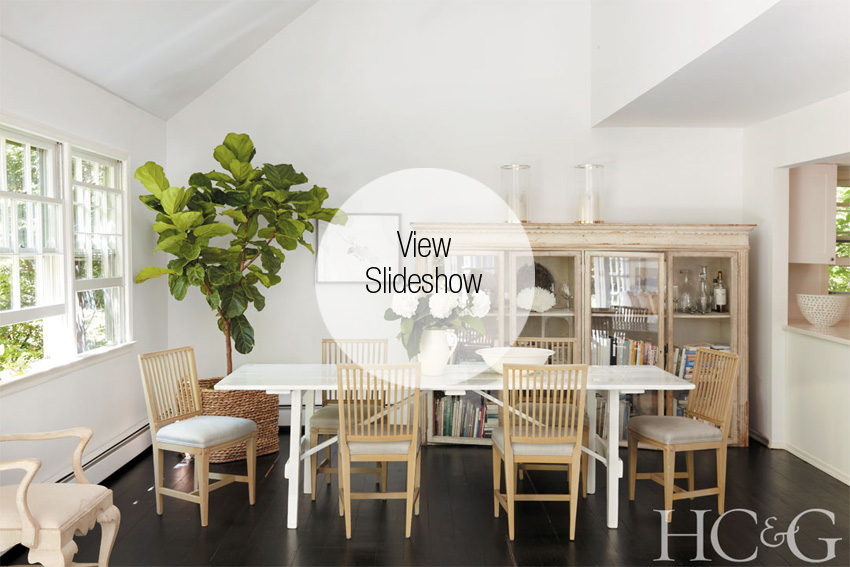 One day Mary Foley stood on the second-floor balcony of her newly acquired Southampton cottage and realized that it was exactly the house her longtime psychic had predicted she would buy. “You will feel like you’re in the woods, even though you’re not,” her psychic had said. “There will be a tiny balcony overlooking a kitchen, and an open living and dining area.”

When it comes to truth-telling, it was Foley’s own sixth sense that had told her the place was meant to be hers—soon after her daughter, Kirby, discovered a listing for it online. “I’m very good at knowing what I like and picturing where everything belongs,” says Foley, whose intuitive nature has guided her career as an interior designer, running the company Foley & Cox with business partner Michael Cox. Having worked together at Ralph Lauren Home, the pair launched their firm in 2002 and since then have created interiors for private residences and even airplanes and boats for clients in New York, Monaco, Nantucket, London, the Bahamas, Florida, and the Hamptons.

Although Foley says she appreciates the bold patterns and colors she chooses for her clients, she’s the first to admit that she didn’t want to live with them herself. In her own home, she opted for an all-white palette to serve as the backdrop for an informal, uncluttered gathering place for friends and family. “White is so simple and clean, it lets me breathe,” says Foley, who left most of the cottage’s architectural details untouched, though she renovated the kitchen, installing Caesarstone counters and Shaker-style cabinets—all in white—for a clean, open look.

Most of the furnishings and accessories in the cottage were either previously owned or given to Foley as gifts. (As a decorator, she is constantly shopping for clients, but tends to get market fatigue when it comes to buying things for herself.) A white Wedgwood bowl is a treasured gift from her sister, stylist and author Tricia Foley. A close friend made the crushed bamboo prototype coffee table that anchors the seating area. An old farm table that Foley has owned for years gets a fresh coat of white lacquer every season. And nearly all the artwork, including a white abstract color field painting, an oil portrait of her dog, Daphne, and a sketch of hydrangeas, was given to her by her close friend and former Ralph Lauren colleague Daniela Kamiliotis. Daughter Kirby spotted a massive round window frame at the now-defunct shop run by Liza Sherman in Sag Harbor; Foley fitted it with a mirror and hung it above the fireplace. And at a barn sale, Michael Cox bought her a sensational cabinet, now stocked with silver, glass, and “cookbooks that I actually use,” she says.

In every room, the designer proves that sticking to a simple palette doesn’t mean a place has to be devoid of visual interest or compelling contrasts. The chunky Merida Meridian sisal rug on the living area’s floor adds a tactile counterpoint to the smooth linen and canvas fabrics on the sofa and chairs. A zinc table—a gift from Kirby—on the original brick patio provides the setting for summer dinner parties. The faded bricks lead up a path to the pool and a 19th-century guest cottage, which was moved to the property by the former owners.

The landscape is a wavy sea of mature trees and vibrant plants, including fiery azalea, weeping pines, red maples, magnolias, butterfly bushes, and a rare spiraling ginkgo. A prize specimen is the soft, billowy pine tree opposite the front door, planted by a young boy who lived in the cottage 30 years ago. He had brought the seedling home from a McDonald’s promotion.

This natural setting is what Foley craves most when she’s away, whether working in the city or traveling for business. Whenever weather permits, she keeps the large French doors to the patio wide open, creating an extra room for summertime guests. She recalls growing up in a similarly wooded landscape, perhaps another reason this place feels so right for her. Foley’s family lived in a rather unusual home on Long Island, designed in 1936 by architect Richard Davison and known as the Canvas Weekend House. At the time it was considered “experimental,” with a flat roof, steel windows, and a cork ceiling. The kitchen was black lacquer and steel, and the exterior was wrapped in canvas. Foley credits her interest in design to having lived in such a striking and imaginative home: “It was the most amazing place I had ever seen,” she says. “It changed my life.” Not surprisingly, the canvas sheathing the exterior was all white.

A version of this article appeared in the August 1 2013 issue of HC&G (Hamptons Cottages & Gardens) with the headline: Foley's Oasis.