Step Inside a Southampton Home Adorned with Bamboo 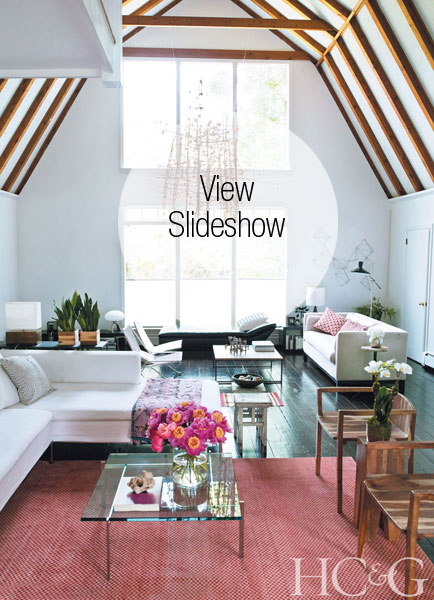 It’s hard to resist the temptations of a jungle near the ocean, especially if you grew up in a beach town in Brazil, says architect and native Brazilian Karla Fernandes-Vogel. When she and her then-fiancé, Matt, who owns the hip stationery company Quotable Cards, were looking to buy a Hamptons beach house, they immediately saw the possibilities in a ramshackle carriage house near Georgica Pond. “The whole thing was very wild, very Grey Gardens,” says Fernandes- Vogel. What sold them on the spot: an incredible grove of bamboo that towered behind the property. “We saw it and just went, Ahhhhhhh.” They bought the place and then, in a boho, Grey Gardens–like move, decided to throw themselves a wedding in their new forest. A boulder was dragged in as the altar, and as the couple took their vows with the wind whistling through the bamboo, “It felt like a pagan temple.”

It was also the perfect way to christen their new home, which they had initially planned to tear down, as it didn’t go with their minimalist sensibilities at all. The interior was a hodgepodge of tiny rooms, blond-wood floors and a narrow, ill-proportioned staircase that screamed accident-about-to-happen. As for the exterior, a wacky roofline highlighted all the additions cobbled onto the structure after it was built in the thirties. But despite its quirks, the house began to grow on them, and they soon found themselves settling in rather than tearing down.

The first order of business: staining the floors black—a quick fix to hide sun damage—and painting the walls white to give the place a more open feel. Then they decided to chill for a while. “In the city, our apartment is a jewel box, with lots of detailing and cabinetry,” says Fernandes- Vogel, who worked at the prestigious firm Davis Brody Bond before starting her own architectural practice in Manhattan. “It’s very precious.”

At the beach house, though, they threw away the rules, the bids and the punch lists and just had fun hunting for quirky objects at local art fairs, flea markets and favorite shops, such as Comerford Collection in Bridgehampton. Pillows brought back from a trip to Morocco are tossed about downstairs; a trunk handmade by Fernandes-Vogel’s grandfather was shipped north and plunked into a bedroom. The living room “mobile,” made of Chinese lantern blossoms for their wedding ceremony, has yet to be taken down. And a custom checkered rug from their New York apartment was tossed into the back of the car once they realized it would look a lot better in East Hampton.

The come-what-may decorating style works beautifully because the couple have stayed true to their minimalist roots. Color, texture and line are considered in elegant, yet casual tableaux with lots of contrasting white space, so each piece has room to breathe. Casually furnished, with comfy, low seating pieces, the home is also naturally kid-friendly (the Vogels are now parents of two-and-a-half-year-old twins), and several small bedrooms easily accommodate weekend guests.

“When we started to build our own histories into this house,” says Fernandes-Vogel, “is when it began to grow on us.” Yes, they’ve added a few things over the years, like the back patio and the brand-new boardwalk that leads through the bamboo toward the pool (and which their little boys like to use as a makeshift racetrack). Someday, too, they’ll definitely get to those still-precarious stairs, but right now they couldn’t be happier with the way things are.

A version of this article appeared in the August 1 2011 issue of HC&G (Hamptons Cottages & Gardens) with the headline: Carriage Trade.