Step Inside a Studio Turned Home in Fairfield County 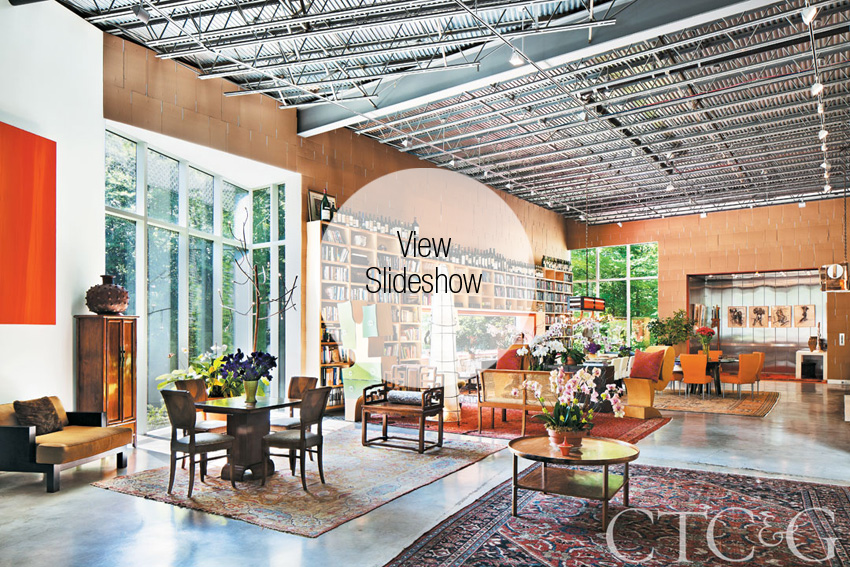 Some people find their corner of the world, put down roots and wait patiently for their allegorical tree to grow. For multimedia artist and budding decorator Robin Rapoport, it’s been a slightly more literal process: Her home is actually cloaked in dense tangles of leafy wisteria. “I refer to it as my ‘green jewel box,’ and I love that it transforms itself with the seasons,” Rapoport says. “It’s made to look almost primitive and, oh my gosh, sort of like a wooly mammoth. It’s really alive.”

Originally the “concrete box in the middle of the woods,” as architect Robert Young describes it, was designed as a studio for Rapoport and her husband, also an artist. Chief among their requirements were that the space be as large as possible—both in terms of square and cubic footage—and flexible enough to accommodate their ever-shifting interests. “We designed it to have good proportions and a good quality of light, and to be a little bit like a stage, to be able to have different sets,” Young says. “One year they might want to use it as a studio to make art, the next they might want to use it as a dance place.” At one point, the program included a basement bowling alley, although that never happened. “It was all thought about as being an accessory structure, literally, a folly,” says Young. “It was going to be this thing that grew over time, and we didn’t even intend for it to be lived in.”

Maybe not, but since he was building on a residential street with strict building codes, Young had no choice but to make sure the place had bedrooms and a kitchen. So when the studio that proved so fabulous for entertaining transitioned into a weekend home, and then finally, some 10 years ago, a permanent one, all Rapoport had to do was turn the raw, industrial, loft-like volume with exposed ceiling ducts into something livable for her husband and children, now 23, 21, 17 and 15.

Although she doesn’t fancy the “collector” moniker, Rapoport has been amassing an eclectic array of furnishings her entire life, and “slowly started to break down the space into different seating areas, invisible rooms,” she says. “I love layer, I love texture, I love mixing.” Weaving it all together is the art, furniture and lighting she designed herself—the stunning copper-tubing chandelier hanging over the dining table, the dramatic tree-branch sculpture defining the living room, the massive, full-wall bookshelf that “really cements” the main living area. (Plans for Rust, a home store that doubles as an exhibition hall where Rapoport can sell her designs and curate others’, are in the works.)

While she loves to read in one area in particular—the “living room,” which is defined by a gray couch with extra-wide armrests and a glass-topped coffee table—Rapoport doesn’t really play favorites. She happens to be particularly proud that her 15-year-old daughter designed her bedroom herself. “She combined Hollywood Regency with shabby chic, and she’s still working on it,” Rapoport says. “We love to go antiquing together. I guess they’ve been more exposed, visually, than most kids have been.” Hence the white crown moldings, chic velvet daybed, glossy black walls and ultra-glam mirrored bureau that would probably be lost on most teenagers.

Rapoport admits that she’s not sure what sort of houses will appeal to her children when they eventually put down their own roots—this place, of course looks nothing like their neighbors’ or friends’ homes. “Even though this is a contemporary home, we all love to look at other houses and discuss design and architecture as a family,” she says. “As long as it’s well done, the style doesn’t matter. We love a shingle home, and we love a Victorian home with a veranda. As long as it has integrity.”

A version of this article appeared in the November 2012 issue of CTC&G (Connecticut Cottages & Gardens) with the headline: Green Jewel Box.