Step Inside a Stylish Addition to a Greenwich Estate 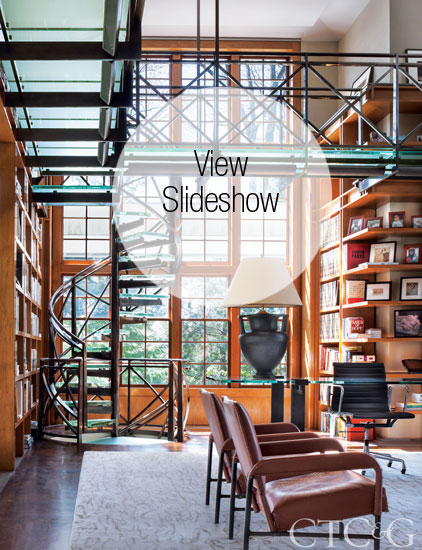 Most of the time it’s the books in a library from which we learn things. But sometimes it’s the very library itself that teaches us about good design. When the owner of a Greenwich house was an undergraduate at Cornell University, he was fascinated by the Andrew Dickson White Library on campus. “It had all kinds of suspended walkways, stages, stacks and bridges,” he recalls. “I’ve always wanted something similar for my books and the photographs I collect.”

Westport-based architect Roger Ferris had designed the original house for the client and his family more than 20 years earlier and since maintained what he calls “a great design dialogue with a friend who is a serious design collaborator.” Challenged this time to devise a library, gallery and screening room addition, Ferris fashioned a towering 20-foot-square cube to easily accommodate all three purposes.

First, he had to marry the architectural décor of the existing house with that of the addition. “As happens with people who pay attention to design, the client wanted to contemporize, update where he was living,” says Ferris. In the adjoining living room, for instance, Ferris removed fanciful moldings and added subtle curves to walls, redefining the space into something more minimal and refined. “I wanted to create a setup for this addition so there wouldn’t be a shock going from the existing to the new,” he explains.

With that dynamic established, the architect embarked on designing a double-height room, with a subterranean 12-seat screening room. Rather than take up space with a standard rectangular staircase, he devised a glass-and-steel spiral one that is as much a utilitarian means of linking the levels as it is a work of minimalist sculpture. The stainless and blackened steel structure features frosted glass treads that appear to float upon stainless-steel fingers.

The mezzanine level is lined with butternut-wood bookcases, a material used elsewhere in the house, above which runs an uninterrupted ledge where the client’s collection of American photographs rests. The suspended gallery is actually a steel walkway lined with a green-tinted translucent, but not transparent glass. The undercarriage is equipped with concealed lighting, making the room glow at night, while functioning as a continuous light fixture.

The client emphasizes that what looks to be a simple structural solution for the space is actually a highly complex one: “This is a solid structure of concrete and steel with a railing system and stairway that could only be inserted and suspended with an industrial support system inserted into the building.” Indeed, Ferris suspended the walkway and, in turn, the stairway itself, from the ceiling as a way to foster a structural lightness throughout. “The spiral staircase is deterministic, there to take you and up down, to serve as a nexus linking all three levels,” he says. Ferris points out a fundamental, but often overlooked dynamic of a home screening room: “Because a screening room doesn’t need windows, we submerged it.” But he cleverly positioned a reception area there so that it captures natural light from above.

“Unlike so many home screening rooms,” says the client, “we really use ours to watch movies, concerts on video, have our Netflix binges.” He is also taken with the sheer functionality of the mezzanine. The bookcases, which house his growing collection of photography monographs, are just high enough to easily reach the black-and-white photographs that lean against the walls—he’s able to display about 24.

Of the space, the homeowner emphasizes its new role: “We split our time between here and another house in Aspen. But as soon as I’m back in Greenwich, this is where I come to enjoy the house.”

A version of this article appeared in the March 2016 issue of CTC&G (Connecticut Cottages & Gardens) with the headline: Studied Solution.