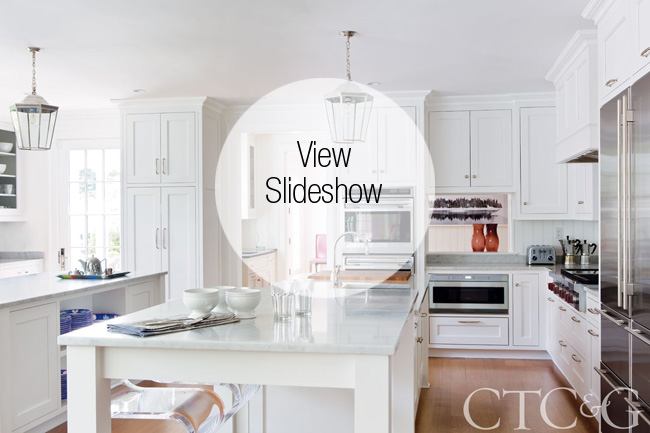 Interior designer Charlotte Barnes spent her early career in fashion, which she admits established a foundation for how she would address residential design later in life. “I was trained to notice small things like how a button hole is stitched,” says Barnes, who worked for Ralph Lauren and Pomellato USA. “It really honed my eye and made me realize that the small details are very important.”

Not surprisingly, prior to beginning a job she also casts a discerning eye on her client’s wardrobe to garner clues on the optimal style for that individual’s home. “How people curate themselves provides lots of information on how they want to live,” she says. For a London-based American couple looking to create a home away from home in Fairfield County, connecting those dots was particularly easy. “They are both very worldly, and the wife has very sophisticated taste while being completely simple,” says Barnes.

But the 1960s center hall Colonial, with its mahogany paneling and excess of trimwork, belied the edited ambience she imagined for them. Fortunately, the building had good bones, and architect Judith Larson had a vision for simplifying the dated structure. “They loved the New England feel of the house and its country setting, but they asked us to make it more open, light and fresh,” says Larson, who rearranged the floor plan to include a larger kitchen, a mudroom and wider upstairs hallway. Next she raised the door heights to compensate for the 8-foot ceilings and made a major impact with materials and fenestration.

After stripping the interiors down to the framing, she replaced the strip oak flooring with white oak planking, traded the ornate fireplace mantels for more classic models and replaced all the interior trim with simplified traditional profiles. “We also added natural light with additional French doors and new groupings of windows,” she explains.

The refreshed backdrop set the stage for Barnes to create living spaces that responded to the homeowner’s desire for “a sunny, white, bright house.” “They wanted something to counter the gloominess of London,” says the designer, who initiated the process with a furniture plan that began in the living room with a sofa and two slipper chairs upholstered in a subtle white print from the designer’s own collection. For additional pattern, she introduced Fortuny pillows, and on the opposite side of the room a chic banquette (also from her collection) is framed by a pair of sculptural 1940s parchment white tables. “It’s a well-curated space where everything feels like it was meant to be,” Barnes says.

Lest things get boring, Barnes likes to counter her precision moves with the unexpected. From an Italian console table paired with a sleek wood and leather chair with a curvy profile to an old kilim getting cozy with a brass desk and a bench sporting a leopard print in the upper level hallway, there’s a surprise around every corner. “Everyone wants to put all the super great things in the entry or the living room, but it’s so much more fun to spread things around and put a wicker light fixture in the family room or a set of vintage Brown Jordan chairs painted red around the dining room table,” she says.

Because the homeowners love to host big family gatherings, Barnes and Larson were careful to accommodate that need with both space and proper furnishings. Central to that idea is the expanded kitchen that accommodates a double island and breakfast nook enveloped by windows that open to the views. Barnes filled the cozy corner with a banquette topped with “cushions so comfortable you want to hang out there forever,” and a huge central gathering table. And, ever mindful of those surprise elements, a black iron Chinese pagoda chandelier lights the area.

“In the end, great design is about buying what you love and having the confidence to mix things up a little bit,” says Barnes. “It’s also important to design for the future. This is not a trendy house. It is forever.”

A version of this article appeared in the January 2016 issue of Connecticut Cottages & Gardens with the headline: Style + Simplicity.

This article appears in the January 2016 issue of CTC&G (Connecticut Cottages & Gardens).