Step Inside a Traditional and Colorful Hampton Bay Home 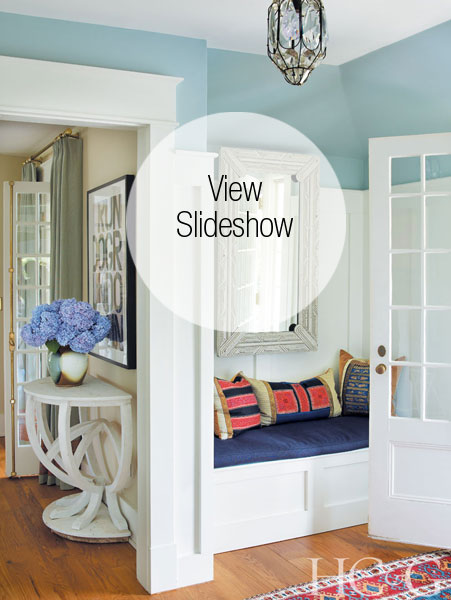 “I love stuff, and lots of it," says Richard Sinnott, surveying his Hampton Bays home. “I like to move things around, so there’s always constant change.” The big stuff—couches, chairs, dining table—pretty much stays put, but when it comes to the smaller stuff—lamps, occasional tables, art, textiles—items tend to flow in and out, sort of like the tides at the nearby beach.

Changing things up is familiar territory to Sinnott, the senior vice president and creative director for accessories and footwear at Michael Kors. “In my job,” he says, “we look at five collections a year, so there’s always something new.” A native of Catskill, New York, Sinnott started out in publishing, working for 12 years at Harper’s Bazaar, where he was promoted to accessories director. “In the magazine business, I got used to constantly shifting trends and new discoveries every month, and at Michael Kors, I am always inspired by the authenticity and honesty in the approach to design and lifestyle—Michael is a flawless tastemaker. So at home, there’s always a progression of what feels right for me at the time. I like to freshen and do a little re-styling here and there. I move things around or buy new stuff or take away something I didn’t love so much in the first place. There are things I don’t love so much, do love, and then don’t love so much anymore.”

It was definitely love at first sight when Sinnott bought his 1912 house in 2006. He had been living in an undistinguished ranch nearby and had fallen into the habit of driving around, looking at old homes. He’d write down the owners’ names and send them letters, hoping they might be willing to sell. “I had always loved this home and drove by it all the time,” he says. “It looked simple and modest and was set back from the road, and it had a screened porch.” The homeowner replied to his note. “I couldn’t wait to see it,” Sinnott recalls, “and when I walked in, it was in ruins. But I just figured, I will gut that mother down to nothing and rebuild it, but better!”

And so he did, reconfiguring the floor plan, repainting virtually every surface, and taking pictures of the existing hardware, such as vintage doorknobs, and buying era-appropriate substitutes where they were needed. Replacement windows came from architectural salvage shops and eBay, and Sinnott even had missing bits of trim remilled. “I just beefed everything up a little bit,” he says.

Sinnott also researched some of the area’s remaining buildings from the same time period. “There are still some turn-of-the-last-century houses in town,” he says, “but a lot of them have been torn down,” replaced by postwar “ranch-y suburbia” structures that coexist with a handful of grand waterside estates. But for the most part, it’s the non-Hamptons-ness of Hampton Bays that’s a big draw for Sinnott. “It’s a mixed bag, a checkerboard,” he says. “It’s not a village where every house is old and perfect. There are some fashion people, and fishermen; there are posh people, and not-posh people. It’s more like it gets a little Jersey Shore-ish. But what’s great is that when I go to the beach, I feel like Kate Moss or Kate Middleton!”

Sinnott’s decor is similar in that it’s done but not-done. Easygoing upholstered pieces, a fun mix of art, colorful collections of china, and a bright palette are expertly integrated with a sharp, curatorial eye. “I wanted to be able to lounge in any room in my house,” he says, “to throw myself down and lie flat comfortably”—a possibility even in the open dining room and kitchen area, where a sofa (not the expected bench, banquette, or settee) provides seating on one side of the vintage farmhouse table. “I’m half Italian, and we spend a lot of time in the kitchen. I thought it would be such an inviting space for me.” Adding to the ambiance is a stunning collection of café au lait bowls, stacked almost precariously in an antique hutch. “I love mixing patterns and color—it makes me so happy,” he says, noting that the equally vibrant painting hanging next to them on the wall is a “1920s Cubist work from an auction—but not like Sotheby’s, honey! He’s just a farmer whacking hay!”

A version of this article appeared in the September/October issue of HC&G (Hamptons Cottages & Gardens) with the headline: All In The Details.