Step Inside a Traditional East Hampton Home with a Fresh Twist 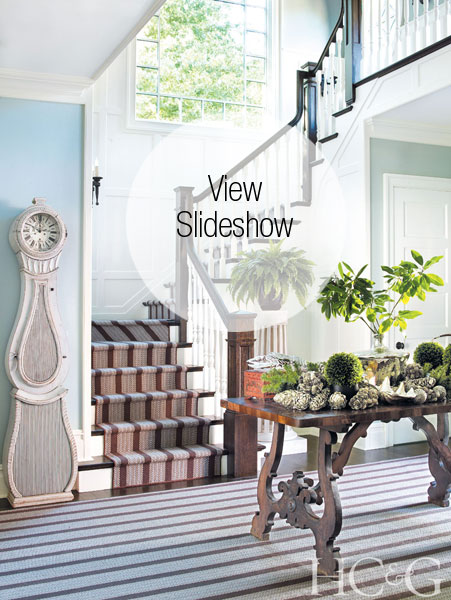 Appearances, as everyone knows, can be deceiving. After a cursory study it would be easy to assume that Erin and John Tintle’s house in East Hampton was a modern-day equivalent to the imposing McKim, Mead & White country houses that proliferated on the East End at the turn of the last century. (And in truth, it was modeled after one that once stood in Newport, Rhode Island.) But don’t let this home’s impressive façade fool you. Inside the curved grand entrance lies a comfortable, inviting interior, decorated in a traditional style but wholly made for modern living. Working in tandem with partner Ross Meltzer of Lodge Design Group, decorator Tom Samet explains that “the Tintles admired traditional detailing, but wanted the inside to be fresh and young looking. We just couldn’t do lots of dark paneling and the kinds of heavy adornment you might expect a house like this to have. The interior needed to match the energy of this young, active family.”

The Tintles, who have two small children, had already begun building their dream house when they met Samet serendipitously. The decorator’s office is housed in a building owned by John Tintle, who “came into our little 10-by-12 space and saw the way it was decorated and asked if we wanted to do his house,” recalls Samet. Adds Tintle: “I had been working closely with Andrew Weiss, an architect and close friend, on building the house and hadn’t planned on using a designer till I met Tom. It was magical how it came about. Tom’s style and aesthetic matched ours almost completely, and I was convinced I couldn’t finish the project without him.” His wife seconds her husband’s enthusiasm. “When we saw other houses he had done,” Erin Tintle says, “they were all equally amazing, yet different. We knew we were going to get our own house, not a cookie-cutter design.”

Indeed, the decor is full of unexpected, thoughtful touches throughout. “Every piece had to have its own pedigree—I didn’t want people to be able to identify anything,” says Samet. “I didn’t want a guest to walk in and say, ‘Oh, look, they have the same lamp.” Accordingly, Samet “shopped all over—from consignment stores to antiques dealers. Everything I found had to have character. When people walk in, I want them to feel like they’re entering a personal, lived-in house, with special memories.”

Samet and Meltzer employed a mostly aqua and green palette with white woodwork throughout and deliberate accents of light natural woods, such as walnut and fruitwood. “Not lots of mahogany, as you might expect in a house like this,” says Meltzer. “And if we used mahogany, it had to be bleached.” Most every surface has a treatment, either paneled or wallpapered or faux, to reinforce the idea of an older house, but with a crisp, clean look. The living room’s walls, for example, have been treated to look like barn siding, but are done in an aqua hue that takes any hint of stuffiness down a notch. In the same room, two informal turn-of-the-century bamboo and rattan chairs provide delightful, unfussy surprise. “This is an unassuming house, and it was important not to use a lot of serious materials and furnishings,” says Samet. “I didn’t want it to feel precious. The Tintles are a very down-to-earth family, and my goal was to make them feel comfortable while still decorating the house with quality pieces. This is a feel-good place.”

While every detail was carefully considered, the house is definitely made to withstand wear and tear. Most upholstered pieces are slipcovered for easy cleaning. The coffee tables are rustic and intended to be used.  In one of the two mudrooms, an American painted cupboard serves as storage and, as Samet puts it, is “meant to be whacked.” Even the dining room, one of the more formal spaces in the house, is child-friendly, with an aged table and a mix of patterns and patinas. “The kids can use practically everything,” says Meltzer. “We didn’t want anyone to say, ‘That’s the room that only the kids use,’ or ‘That’s the room the kids aren’t allowed to go in.’ Patterns on rugs and fabrics are great for disguising any mishaps that might happen!”

Connecting the main house to the back part of the house over a drive-up courtyard, a “bridge room” might have been simply dismissed as walk-through territory, but within its tight confines Samet created a cozy crash pad filled with amply upholstered pieces and nautical prints. Around the corner, a second family room features a games table surrounded by chairs covered in a flag-motif fabric. “Every space, no matter how small, is designed for comfort,” he says. “There’s not a piece of furniture you don’t want to just curl up on. It’s a place you want to hang out in.”

The Tintles are certainly more than content to sit back, relax, and stay a while. “The day we moved in, we felt more at home than we had at our previous place, where we lived for six years!” says Erin Tintle. “It’s definitely beyond our dream house.”

A version of this article appeared in the Holiday 2012 issue of HC&G (Hamptons Cottages & Gardens) with the headline: Home for the Holidays.

This article appears in the December 2012 issue of HC&G (Hamptons Cottages & Gardens).