Step Inside a Traditional Georgian Home with an Unexpected Twist 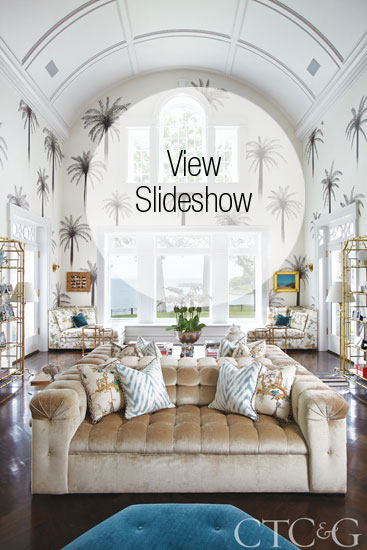 Sometimes you can’t tell a book by its cover: case in point, the waterfront home of a young couple with two small children. On the outside, the stone gables, precisely placed double-hung windows and other Georgian overtones identify the sprawling estate as textbook traditional. But once you pass through the front portal with its elegant limestone surround, you’ll find yourself looking at the dust jacket to make sure you’ve got the right volume.

Sure there’s a classic black and white tile floor in the entry and enough columns and arched doorways to link the interiors to its grand façade, but beyond that if you were expecting plaids and framed botanicals, you’ll likely be doing a double take. After glimpsing floating hand-painted palm trees on the living room walls and spying teal-toned bookcases in the library, you might be feeling a bit like Dorothy the first time she laid eyes on Oz.

On the one hand, according to architect Cormac Byrne, the clients wanted the house to look like it was 100 years old. “They asked for lots of traditional trim like wainscots and keystones,” he says. On the other hand, interior designer Eugenie Niven Goodman was charged with making things comfy, fresh and fun. “We looked to the past for inspiration, then sought ways to put a new take on everything,” says Niven, whose introduction of grasscloth on the entry walls to mitigate the molding was only the beginning.

For his part, Byrne also took cues from the past, relying on the vernacular of the existing 1920s house to guide his plan. “The stone veneer was salvaged and reused, and the main chimney was kept and incorporated into the new design,” says the architect, who placed the formal rooms on the old foundation and rebuilt the informal wing to include the kitchen, breakfast and family room. “The property sits between two islands, and care was taken to locate the most-used rooms to take full advantage of the vista.”

Because the home’s expansion required additional stone, Matt and Whit Matthews of Significant Homes opted to mix the old stone with new locally sourced granite for a seamless finish. “There’s no hint of mismatch anywhere,” says Whit Matthews, noting they also solved a fenestration issue on the back of the house by introducing transoms over the large expanses of clear glass. “It was a compromise so the traditional aesthetic would be right, while they’d also have unobstructed views of the Sound,” adds Matt.

In the living room, varied window styles soften the two-story gathering place. “Really large windows with detailing make it more human scale,” says Byrne, who included a barrel-vaulted ceiling to further moderate the room’s imposing dimensions. Meanwhile, Niven responded with back-to-back tufted taupe velvet sofas as the basis for two distinct seating areas—one facing the fireplace and the other toward the view. “The room itself is very symmetrical, so everything has a pair,” says the designer, pointing to the corner chairs topped with a chinoiserie-inspired fabric and matching gilded metal étagères. And then there are those palm trees—the first of many surprise elements that serve to elevate the design here and throughout the house.

“The word unexpected became the recurring theme,” says Niven, who drew inspiration from an ikat rug with threads of teal in the library and boldly lacquered the walls in a similar tone of green. Rather than ho hum matching beige sofas in the walnut-paneled family room, one sectional wears a wild blue zigzag pattern and cheery red pillows. Even in the more traditional formal dining room, where Hepplewhite-style chairs surround a family heirloom table, bright yellow host chairs provide a surprise punch.

Finally, it was the owner’s attraction to trellis wallpaper that set the tone in the kitchen where the lime green repeated on the chair cushions seems to be an exact match for the lush lawn visible out the series of French doors. “Out of every window, you see green and blue,” says Niven. “Those same colors flow throughout the rooms, and that’s what keeps it all together.”

A version of this article appeared in the March 2016 issue of CTC&G (Connecticut Cottages & Gardens) with the headline: A Novel Approach.