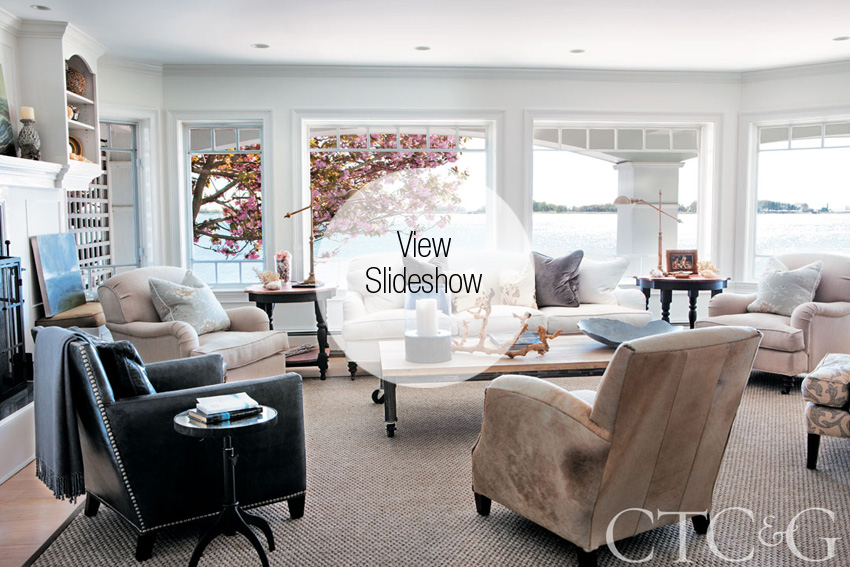 Cristina Von Bargen and Susan Oster have been best friends since childhood, when they grew up on Philadelphia’s Main Line. So it was only natural that when von Bargen started looking for a weekend home in Rowayton four years ago, the New Canaan designer was the first person she called.

At the time, the Manhattan resident was planning a wedding to Jonathan McHardy, a New York-based fund manager. The couple loved the snug waterfront village and its beach-resort feel where von Bargen had owned a house for five years. But they needed a larger space to accommodate their five children, four of whom live in New Zealand, where McHardy was born.

It was a tall order, Oster recalls. “It wasn’t that they wanted a modern house or a Victorian house, they wanted a great house,” she says. After weeks of searching, they found the ideal spot: a four-story classical revival on Bell Island, with tons of space and a spectacular waterfront setting. Originally built in 1856, the house was once a hotel that hosted such luminaries as Guy Lombardo and King Edward. From the water, the building has a commanding presence; there are balconies on every floor, a long outdoor porch, and stone steps that lead to the water and a swim dock. “You almost feel like you’re on a boat,” says Oster. “There’s a sense of calm about this place that’s just extraordinary.”

At the time, life was anything but calm for von Bargen, who was in the middle of planning her wedding and looking for a new apartment in New York. She listed her original house “right around the time that the real estate bubble burst,” recalls Oster. “No one expected her house to sell right away. It was gone in a day.”

The pressure was on. The designer had five weeks to get the Bell Island home ready. Structurally the building was in great shape. The interiors, however, required a complete overhaul—new plumbing, wiring, stonework, tiling and painting. “The house was beautifully done,” says von Bargen. “But it was very much like a Florida home—lots of bright colors and window treatments. I wanted something that was more soothing, more restrained.”

To keep the attention on the view, Oster chose a color palette—white, gray, taupe, green—that echoed the surrounding seascape. “We wanted the colors of the water,” she says. “But New England waters, not the tropics.” To help preserve the home’s boat-like feel, walls were whitewashed throughout, and the trim was painted a high-gloss white. “It’s like glass,” she says. Sea-grass area rugs top lightly whitewashed wide-plank oak floors.

The circular flow of the downstairs rooms “works very well for a modern family,” says Oster. The kitchen and family room open onto a breakfast room, where French doors lead outside. The only room that doesn’t have a water view is the dining room, which overlooks the front gardens. “Instead of trying to brighten it, I decided to play up the California wine cave feel,” says Oster. Here, the walls are done in a pale gray fabric with a hint of metallic; a large oil painting of an egret holds center stage.

The mood is brighter upstairs in the master bedroom, with its white walls and ivory linen window treatments. The adjacent bath features a mix of tiles, including a Ming green marble mosaic on the floor and tub surround.

One of the family’s favorite spots is the media room on the third floor, which—thanks to the home’s former status as a hotel—comes with a small kitchen. What was an eclectic mix of yellow plaid and bright blues is now a soothing array of earth tones with blue accents and grass-cloth covered walls. “It’s a wonderful place to screen movies after a day spent outdoors,” says von Bargen. Though even here, as with every other room in the house, the view is the main attraction.

A version of this article appeared in the June 2012 issue of CTC&G (Connecticut Cottages & Gardens) with the headline: Living on the Edge.

This article appears in the June 2012 issue of CTC&G (Connecticut Cottages & Gardens).