Step Inside A Waterfront Home with Bursts of Color 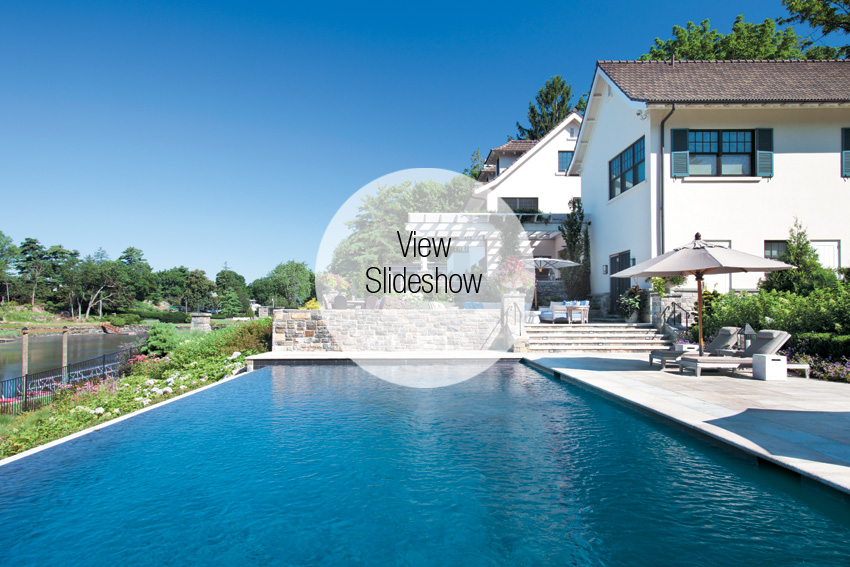 When a Manhattan couple with a weekend place in Connecticut was looking for their dream house in Greenwich, location was not just key—it was the selling point. Architect David Taber of Taber Studios, who worked with the couple on the project, recalls: “They hired a building inspector, and the husband said something like ‘unless you tell me this house was built on a nuclear waste property, we are buying it.’ They loved the property that much.” Indeed, on a secluded inlet overlooking Long Island Sound, there was much to love.

The existing house, however, was another story. The 1930s Spanish-style home with white stucco painted terracotta roof tiles, wood shingles and traditional moldings around windows and doors was in “desperate need of renovation,” says Taber. “And the existing house didn’t really take advantage of the views and the outdoor quality of the site. But they wanted to keep the character of the original house. So the whole design—outside and in—aimed to honor the water views, while remaining true to its character.” The couple and their two teenage children also needed more space. “The addition became a large box cranked 90 degrees to the original, with a garage and a pool house with guest room and gym,” says Taber. “The two masses are completely separate, but similar to each other in design style.”

It wasn’t until Manhattan-based designer Jamie Drake of Drake/Anderson came along, though, that the inside and outside really came together. “Jamie came on board a little later than most interior decorators, so we had the flow down already. But he was critical in making everything work together,” explains Taber. The wife was keen on a more contemporary design on the inside while keeping the outside traditional, yet the husband is more of a traditionalist. Drake, who had worked with the couple close to 20 years ago in their Manhattan apartment, was able to find middle ground with a transitional style. “Having grown up in Connecticut, I do understand the Connecticut style. But that’s filtered though the Jamie Drake lens, which includes a palpable vitality with injections of color,” he explains. “In previous apartments, they had lived entirely with neutrals. One of their desires was to have interiors with colors. We went with bold accents and punches of colors throughout.”

The foyer sets the general mood for the entire space: elegant and traditional millwork combined with furnishings that are more contemporary in nature but with nods to the past. Throughout, the spaces are connected by shades of pumice, taupe and greige. Bursts of colors are layered in upholstery, pillows and curtains. A retro wing chair covered in purple leather, for example, is the first thing visible in the living room from the front door, which is painted the same vibrant shade. Accessories reiterate the upbeat color palette. “The homeowners wanted something livelier and a little more relaxed,” says Drake. “They wanted to celebrate and take advantage of the verdant property, and focus on and frame the views.”

And the outdoors is much celebrated by the family. Landscape architect Janice Parker, who has known the couple for years, designed different levels of outdoor spaces on the 1.34-acre lot. She converted the steep site into a series of terraces that step down with the grade. “We wanted privacy and to maximize water views, and I also wanted to create multiple areas for family life—a place to watch the sunset, to have a glass of wine, a loggia for outdoor eating, a pool area and so on.”

Parker worked with Drake on furnishing the outdoor spaces to match their use. “Contemporary and colorful was the direction we were all going in,” notes Parker. “It’s compelling for us to create a space that speaks to intimate domestic family life. This family really uses every single part of the property, and that’s tremendously satisfying.”

A version of this article appeared in the September 2012 issue of CTC&G (Connecticut Cottages & Gardens) with the headline: Living in Color.

Making waves on the market, the splashy residence on “Billionaire Lane” is also one of the most expensive listings in the country.