Step Inside an Antique-Filled Amagansett Colonial 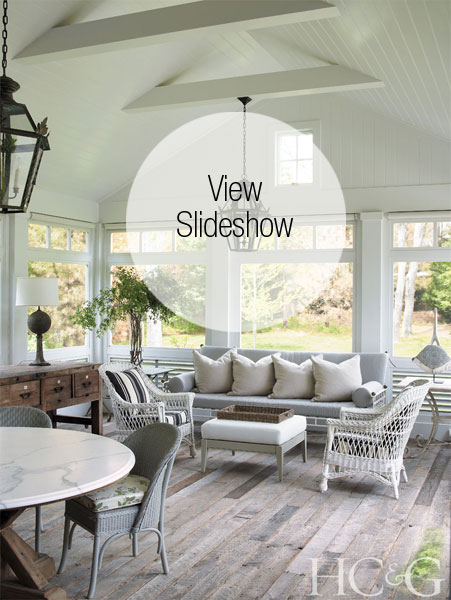 Storytelling is designer Jennifer Vaughn Miller’s forte—but instead of words, she creates narratives through rigorously edited, elegantly nonchalant, highly personal spaces. A detail as small and seemingly insignificant as the monogram on a vintage sheet can take Vaughn Miller back to a summer day from her Texas childhood: “It was the Fourth of July, and I was at a friend’s country home,” Vaughn Miller recalls. “We’d just made blueberry pie, and I curled up on a daybed on her screened porch, where I found a quilt that had beautifully stitched monogrammed letters. As a little girl, I was fascinated. I realized that there was a story behind the quilt, a history to it. I loved the romance of that.”

Vaughn Miller, who majored in architecture at the University of Texas and worked for six years with designer Laura Bohn, went solo in 2010 with Vaughn Miller Studio, refining an aesthetic that balances sentiment with discipline, indulgence with restraint. “I always want something with an edge,” says the 33-year-old, who is based in New York and married to Derrick Miller, the creative director of the luxury footwear brand Barker Black. “I don’t like things that are too perfect. Anytime anything gets too neat or too pretty, it disturbs me.”

Among her first clients are Leslie Dumont and Fred Levin, retired empty nesters who traded in their upstate golf retreat four years ago for a 4,200-square-foot, six-bedroom colonial in Amagansett. “Jennifer is a tremendous curator, and we share a mutual love of antiques and found objects,” says Dumont, who frequently accompanies Vaughn Miller to the Brimfield flea market in Massachusetts, as well as to design and antiques fairs in New York. “Sometimes I’ll send her a picture of something I want to buy, and she’ll say, ‘No, absolutely not.’ She keeps me in line. At one point I said to her, ‘Oh, I get it. My grandmother’s from France, not Tennessee.’ She said, ‘If you’re going to tell a story, make it a beautiful story, one with some truth to it.’”

Working closely with New York architect David Hottenroth, Vaughn Miller set out to create a greater sense of flow in the cozily proportioned home. A stairwell was opened, a living room added, a back patio screened in. The kitchen was overhauled and updated. (Dumont, a baker who once ran her own pie company, Proud to Be Flaky, is pleased that the Carrara marble–topped island is “nice for rolling out dough.”) With an eye for graphic contrasts, Vaughn Miller gave her clients an adventure in the unexpected: In the foyer, living room, and bedrooms, inky blacks play against calming woods, accessories in white and cream, and industrial pieces; pale gray walls in each room offer cohesiveness and calm.

Once proper and predictable, the home has indeed been transformed into something a bit edgier—in keeping with Vaughn Miller’s design sensibilities. A massive 18th-century armoire in the living room is both arresting in scale and grounding, thanks to its warm oak timbers. Striped rugs energize the foyer and bedroom floors. “Pattern can be trendy, and therefore quickly tiresome,” says Vaughn Miller. “Maybe it’s the architect in me, but there’s something about the rigidity of stripes I can accept.” The dark wide-plank flooring throughout suggests that these summer residents are more about bringing flowers in from the garden than tracking in sand from the beach.

“One of my rules is, You can’t say everything you’d like to say in one home, or even in one room,” says Vaughn Miller, and accordingly the house is filled with surprises. Vintage sports trophies from Dumont’s extensive collection are arranged on shelves stacked in front of a window in the study. (Vaughn Miller was inspired by a French bistro’s bakery windows.) “I love them graphically, their spark and shimmer,” Dumont says of the prizes. On the second floor, a series of 1950s mug shots, framed in black, hangs next to the photocopied flip sides of each picture—framed in white—detailing each inmate’s criminal offense. “I want friends and family to walk around the house, cocktails in hand and listening to Frank Sinatra, and see something they’ve never spotted before—even if they’ve been here ten times,” Vaughn Miller says.

But the designer has left them with a cliffhanger: She convinced her clients to keep an area above the foyer fireplace empty until precisely the right painting or mirror can be found for it. “I’m not willing to fill the space with something that isn’t right,” Vaughn Miller says. “I’ll know it when I see it.” Dumont and Levin don’t mind the delay. “What’s the hurry?” says Dumont. “That’s the great thing about having an interior designer your husband trusts! If I show him something, he’ll always say, ‘What does Jen say? Ask Jen.’ ‘Ask Jen’ is a big thing around here.”

A version of this article appeared in the July 15 2013 issue of HC&G (Hamptons Cottages & Gardens) with the headline: Storied Romance.