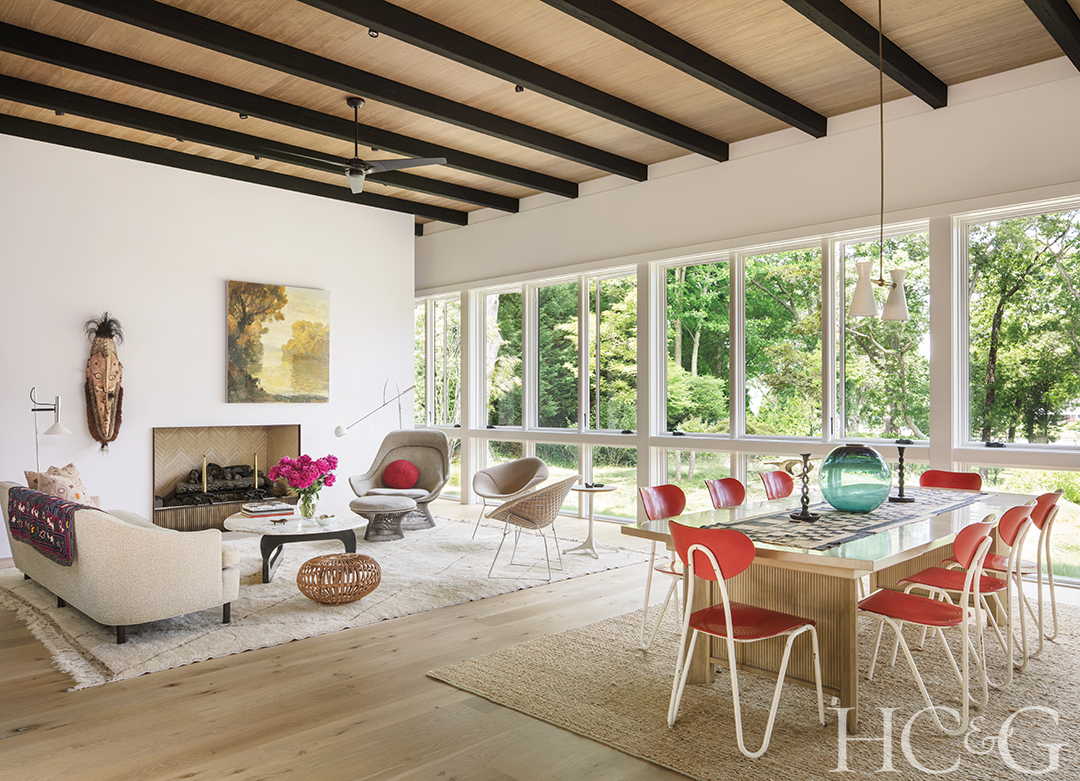 Patti Weinberg and her husband, architectural photographer Scott Frances, were probably destined to build a modern house in Sag Harbor. Unlike many 20-somethings who are just discovering the appeal of vintage modern furniture, both Frances and Weinberg grew up with it. Frances’s mother, a decorating editor at Family Circle, and his father, a creative director at an ad agency, furnished their Manhattan apartment in Stuyvesant Town with classic postwar pieces. “Our apartment was an homage to mid-20th-century-modern design,” Frances says. “We had a Noguchi coffee table, an Eames rocker, Jacobsen stools, a Nelson bedroom suite, and a Saarinen womb chair. I still have most of that furniture. These designs are heroic to me.” Weinberg, an insurance broker, grew up in suburban New Jersey with parents who had similar enthusiasms, and she went on to collect more vintage pieces as an adult. After she and Frances married 10 years ago, the couple merged their two collections.

The place to put it all came next. In 2016, after having enjoyed a weekend getaway in the center of Sag Harbor for a decade, Weinberg and Frances decided to look for a quieter location outside the village. In the Redwood neighborhood, a Sag Harbor enclave that was settled, most appropriately, in the 1950s, they found a nondescript house on a hill overlooking the narrows of Sag Harbor Cove.

“When we stood in the center of the property and looked north toward the narrows, we both felt the site would be ideal for a modern home,” Weinberg recalls. They bought the house, knowing that they would tear it down, and gave a call to Hal Goldstein, a partner in the Manhattan architectural firm Janson Goldstein, whose projects Frances has been photographing for years. 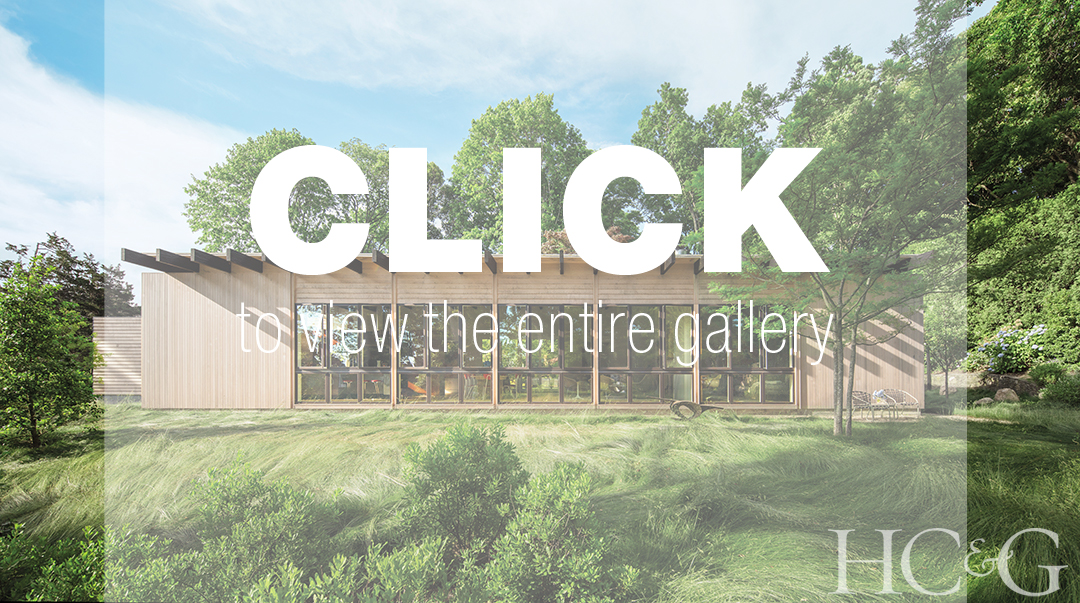 To take advantage of the water view, Goldstein sited the cedar-clad house on the property’s highest point, which also allowed him to tuck in a garage underneath. Steps lead through a shimmery fescue meadow to the house’s humble entry on the eastern side, which belies the 60-foot-long wall of windows along the northern façade, anchored like a ship on the ridge overlooking the water. Overhanging beams, Goldstein says, punctuate the roofline and act as “an expression of the structure within. They create a continuous rhythm.”

The plan of the 3,000-square-foot one-story house is an elongated U. The principal public rooms line the north wall: an open kitchen, dining area and living room, and den. Behind them lie the master bedroom suite on one side of the U and guest bedrooms on the other, with a large central courtyard for outdoor dining in between. The compact scheme ensures that rooms are flooded with light at virtually any time of the day. All look out on sumptuous grounds designed by Joseph W. Tyree, who included a garden border planted around a red Japanese maple transplanted from the couple’s previous home.

The interior architecture features a minimalist palette of materials: walnut, glass, and oak. The 12-foot-high flat ceiling in the public rooms is clad in unfinished walnut, the partition wall separating the entry from the kitchen is a handsome book-matched walnut, and the floors are rift-sawn white oak. These purposefully spare components accentuate the couple’s furnishings, such as the vintage Gilbert Rohde chrome barstools at the marble-clad kitchen island and aluminum pendant lights designed by Paul Mayén, the architect partner of Edgar Kaufmann, Jr., whose parents commissioned Frank Lloyd Wright to build Fallingwater. The dining table, designed by Eliel Saarinen and Paul Frankl, is surrounded by German Bauhaus school chairs found on eBay, and in the adjacent living room, chairs by Warren Platner and Harry Bertoia sit on a berber rug that Weinberg and Frances bought on a recent trip to Morocco.

The den showcases the couple’s art collection, displayed salon-style above a Cité armchair that Jean Prouvé designed for Vitra and a Vladimir Kagan sectional. In the master bedroom, a 1962 Philip Pearlstein painting, Models in the Studio IV, hangs above a vintage Italian armchair and a Rohde-designed credenza. Although the house is undeniably brand-new, Weinberg and Frances’s furnishings fit so seamlessly that it seems shot straight out of the mid-20th-century canon. The couple had asked Goldstein for “warm modernism,” and they got all that and more.

A version of this article appeared in the August 15 issue of HC&G (Hamptons Cottages & Gardens) with the headline: Mod Squad.