Step Inside an Eclectic Bridgehampton Home 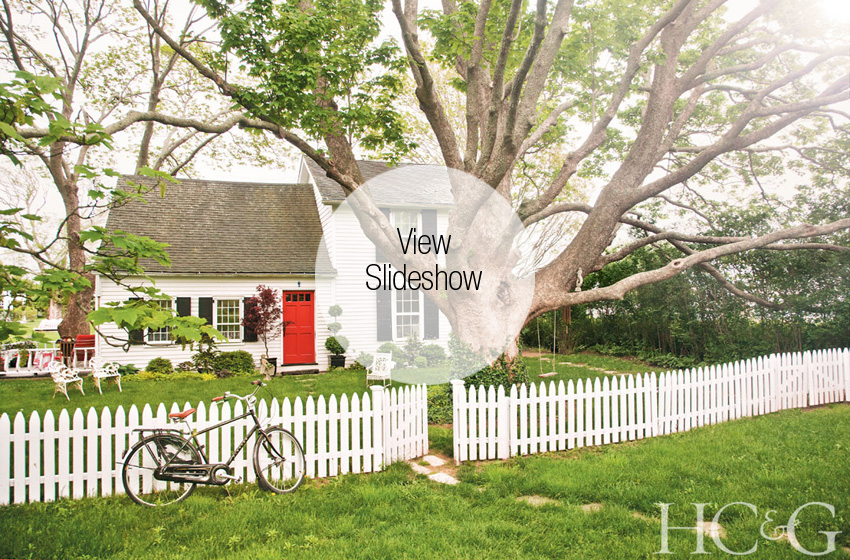 If the relationship between a house and its owner may be likened to a dialogue, artist  and adwoman Anita Madeira joined the  conversation with her pre-Revolutionary home relatively late, about 25 years ago. Since that time, she has listened to the house, hoping to strike a balance between contemporary comfort, appropriate historicity, and her own evolving aesthetic.

“I had my Pilgrim period,” she confesses, “and my period of collecting, but I felt like I was starting to be suffocated by stuff. Now I’m in a more minimalistic mode. I’m cleaning up and clearing out. Making room for the muse to enter.”

When she and her former husband bought the place, they thought it would be an easy fix, but the age of the house and the updating done along the way (including now-obsolete building materials) complicated the process. Madeira opened up the first floor of the oldest part of the structure, taking down a wall between the kitchen and living room, which are now a single space divided by an oxidizing steel I-beam that nicely iterates the circa-1770 ceiling beams. (The windows are original, although the wide floorboards are replacements.)

She joined two rooms in the house’s 1900 addition in order to create an open-plan dining and sitting room, both of which demonstrate the special nature of her relationship with art, design, and furniture. “Nothing is precious here,” Madeira notes. The chairs come from thrift stores; the tablecloth was used as a backdrop for one of the commercials she has directed. Even pieces with provenance are given her own special twist: The light fixture in the dining room is an original-issue Alvar Aalto reputedly from Eero Saarinen’s home. When she bought it, it had a yellowing fiberglass skin, which was cracked, but she hung it anyway. Years later, she removed the skin, revealing the wire armature, which gives the light a whole new life.

It’s clear that Madeira has a special affection for things that have been used, that have patina. A red paw print on a white slipcover is not a stain to Madeira, but a memory (she has two dachshunds, Bergdorf and Winston). The door in the sitting room is decorated with the metal tops from Veuve Clicquot champagne corks. One of the windowpanes still bears the mark of a former resident, who scratched her name in the glass with her diamond wedding ring. And large pavers on the property turned out to be headstones facing down. Ultimately, Madeira has discovered, she just needs to wait patiently until the house tells her what it wants to be.

Aside from an impressive cache of modern photography, the bulk of Madeira’s collectibles come from yard sales and charity shops. “Almost everything I have has a scratch or a crack,” she says, admitting that sometimes she even adds the wear. For her bedroom, she installed a 1930s chest of drawers from the Animal Rescue Fund thrift store in Sagaponack. It was painted white, but when she took some sandpaper to it, a beautiful aqua blue began to show through. “It must have been a popular color at some point,” she says, “because when I stripped the siding off the walls, I found wallpaper in exactly the same color. I had the whole room plastered white, and then I exposed some of the aqua. Now children come and look for familiar shapes in the random patterns—like clouds.”

The home’s single bathroom was a complete makeover. “It was pure Holiday Inn when we bought the house,” she says. “We had to open up the eaves so people over 5 foot 9 could shower in the bathtub.” She notes that her daughter, Nell, salvaged the towel rack (once a ladder) from the yard, which also came with such artifacts as “rugs, a refrigerator, and car batteries.”

Madeira’s favorite room may be the guest room, which is painted with chalkboard paint and decorated with a mural by her artist friend Jim Gingerich. “It’s a reference to the murals the great old houses used to have in living rooms and dining rooms,” she says. Her mural depicts Gibson Beach, a favorite place with a lifetime full of happy associations.

Even Madeira’s studio is a hand-me-down. “When I got to wanting a separate studio space,” she says, “I didn’t want to build something new. Since I use found objects in my art, I thought I should have a ‘found’ studio.” Hers once stood behind the Candy Kitchen in Bridgehampton. Built as a chicken coop, it was later used as shelter for migrant workers. To some eyes it might be yet another quirky addition to Madeira’s come-what-may grand plan, but to the artist it fits right in.

A version of this article appeared in the July 1 2012 issue of HC&G (Hamptons Cottages & Gardens) with the headline: A Twist on Tradition.