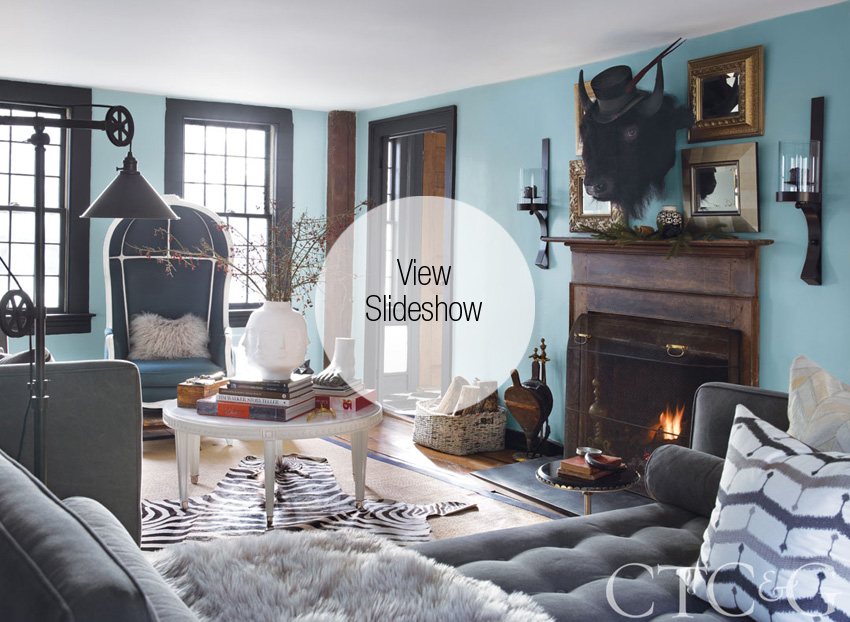 The rooms that interior designer Collin Robison creates in the Newtown home he shares with his longtime partner, Trent DeBerry, might be seen by some as perfect compositions, yet many objects within are imperfect. “I love chipping white paint, distressed floors, things that are irregular, that have uneven edges,” notes Robison. “I am attracted to whatever is imperfect.” And, yet, Robison admits to awakening in the middle of the night to readjust—and perfect—a stuffed cockatoo on a console or to reposition a vintage top hat on the head of a bison that appears to be sniffing greenery draped on the mantel. While both men continue to collect, decorate and fill their five-bedroom home, portions of which date to 1790, with objects and furnishings both eccentric and pragmatic, their rooms never feel stuffed or claustrophobic. “We’re constantly looking for things to bring inside,” says Robison, an interior designer and former makeup artist, “but we have a new rule: We have to know where something is going to go in advance of buying it. For a while, it was about accumulation. We are definitely learning about restraint.”

Robison, who designs interiors for clients throughout Connecticut, Westchester County and the Hudson Valley, and DeBerry, who works as a school-system administrator, both hail from Texas. “Trent is from Austin and I’m from West Texas, the middle of nowhere, where there’s lots of cacti and sand,” says Robison. “I blocked out much of my childhood because I felt so out of place there.” Robison seems to have reinvented himself through the home and objects he and DeBerry live among. When they purchased this home two years ago in August, they managed to remove the unsightly details, move in and choreograph all of their goods, paint the interiors in varying depths of gray, and have it fully decorated in time for Christmas. “I’m a maniac like that,” admits Robison.

While it may be difficult to immediately discern themes in their collection of items that includes mannequin forms and stuffed birds, domino sets and plaster busts, bell jars and animal heads adorned with crowns and necklaces, Robison can pinpoint their interests. “I have many obsessions, but a primary one is anything black and white—though collecting for me, for us, since our tastes have rubbed off on one another, is really whatever my eye’s attracted to.” In composing the vignettes in every room, Robison confesses that they are not the result of conscious decisions. “It’s almost like a movie set in my head—I just see how things are to be put together,” he explains. Few might think a bright red African headdress the perfect accent above a bed, but that is where Robison envisioned it.

Robison’s talent for finding and combining the right antiques and flea-market finds also relies on his ability as an interior designer to mix those “imperfect” elements with finer, newer furnishings. In the dining room, a Crate & Barrel table is surrounded by a mix of Jonathan Adler for Parker Palm Springs chairs upholstered in vintage coffee-bean sacks, as well as elegant, upholstered ones from Crate & Barrel, while the antiques-laden living room features a Jonathan Adler sofa in gray distressed denim and a Jonathan Adler Regent circular cocktail table.

The many shades of grays that cover the walls allow objects and antiques to emerge. Even their greyhounds—Finnegan, Oliver, Sawyer and Scout—hearken to their aesthetics. “We love our dogs, but I might sound hardhearted in saying that what first attracted me to them is their body shapes,” says Robison. “As both loving pets and as objects, they’re right.”

Despite the couple’s mania for a prevailing palette, Robison indulged in color in the den, painted a dark peacock teal, and in his home office, which glows like a giant emerald. “I love color and the way a certain shade can determine a mood,” he says. “A can of paint can transform a space.”

While Robison and DeBerry live happily among their possessions, they get satisfaction from guests and family members who they frequently entertain. “We love seeing the house through other peoples’ eyes,” says Robison. “I’ve definitely learned to be more relaxed about what we own. If something breaks, it breaks.” Pausing, he adds, “Trent says I’m not really that way.”

A version of this article appeared in the November 2016 issue of CTC&G (Connecticut Cottages & Gardens) with the headline: Cool & Collected.