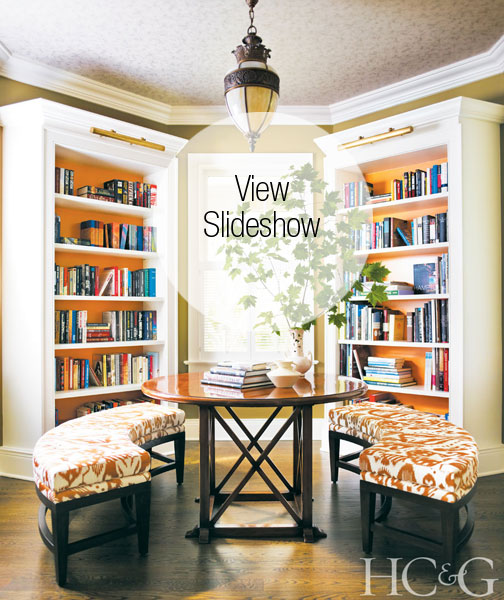 As a young man growing up in Westchester County, Gideon Mendelson didn’t “get” the Hamptons. “All I saw was what the media told us about the affectation and phoniness,” he says. “But my father really loved it here, and he and my mother rented homes in a variety of locales every summer. He taught me it wasn’t about the shops and movie stars, but rather the community of people who love this life.”

That version of the Hamptons is what the interior designer and his partner sought for their own family, including their 19-month-old son, Owen. Hoping for a home with a sense of history, the couple toured 35 properties before determining that classic cottages were just too small to accommodate routine weekend visits from extended family and friends. With family taking precedence, they opted for a spec home in Sagaponack with a typical shingle-style exterior and 5,000 square feet of rooms in need of personality.

“The challenge of spec houses is that they are built without furnishings in mind,” says Mendelson, who has degrees from Columbia University (architecture) and the New York School of Design. “The scale of the rooms was large, so my goal was to make it feel as personal as possible. I also saw it as an opportunity to show how different design styles and periods could live together.”

His first furniture pick—a 19th-century coffee table with a walnut plank top on a new wood base, established his penchant for merging old with new. Mendelson followed up by topping the living room’s formal fireplace mantel with a contemporary convex mirror by Hervé Van der Straeten. The theme continues in the kitchen, where an über-modern David Weeks lighting fixture is suspended over a kitchen table surrounded by reproduction Edward Wormley chairs from the 1950s. “Whether you put one modern piece in a traditional room or the reverse, it’s the eclecticism that keeps it fresh,” he says.

Mendelson’s distinctive style is about much more than pairing individual pieces—it’s about creating ensembles that embody a sense of comfort and surprise. “We all have an aesthetic vocabulary we grew up with that’s familiar,” he says. “But it’s the unexpected choices that give you something new to experience every time you enter these rooms.”

In the entry, where traditional demilune tables complement grasscloth-covered walls, it’s the Carlo Scarpa Italian glass lighting fixture that delivers the unpredictable punch. Throughout the house, Mendelson strikes a balance between the expected—slope-armed sofas topped with nubby linen in the living room—and unexpected, like snakeskin on the library ceiling and a Sputnik light fixture in the home office.

While at Columbia, Mendelson also studied film, and the cinematic influence is obvious in the way he composes a space. “I am very conscious of how things are framed,” says the designer, who placed an Elger Esser photograph on the living room wall to bring out the chartreuse in a wide-striped settee, and added a multilevel lacquered and bronze coffee table that almost seems to dance across the space.

In some areas of the house, the stereotypical Hamptons beachy blues and sandy creams take a detour, thanks to Mendelson’s slightly unconventional style. The office wallpaper, for instance, sports a bold turquoise stripe, while the zebra-print staircase runner is olive. Color and pattern also play a major role in cozying up the expansive master bedroom. “It’s difficult to make rooms this big feel comfortable,” says the designer, who added seating at the end of the four-poster bed to scale things down. “Playing with various stripes on the chaise and drapes keeps the eye moving around the room in different ways, and the chairs are also the perfect height for a climbing station for Owen.”

Despite not always following standard rules of design, Mendelson’s home captures the Hamptons spirit, and more important, is a place his late father would have loved. “As a whole, there’s something comfortable about it,” he says. “You might not understand everything at first, but it feels like you’ve been here before. It all feels like home.”

A version of this article appeared in the July 15 2012 issue of HC&G (Hamptons Cottages & Gardens) with the headline: Gideon's Bible.

This article appears in the July-15 2012 issue of HC&G (Hamptons Cottages & Gardens).