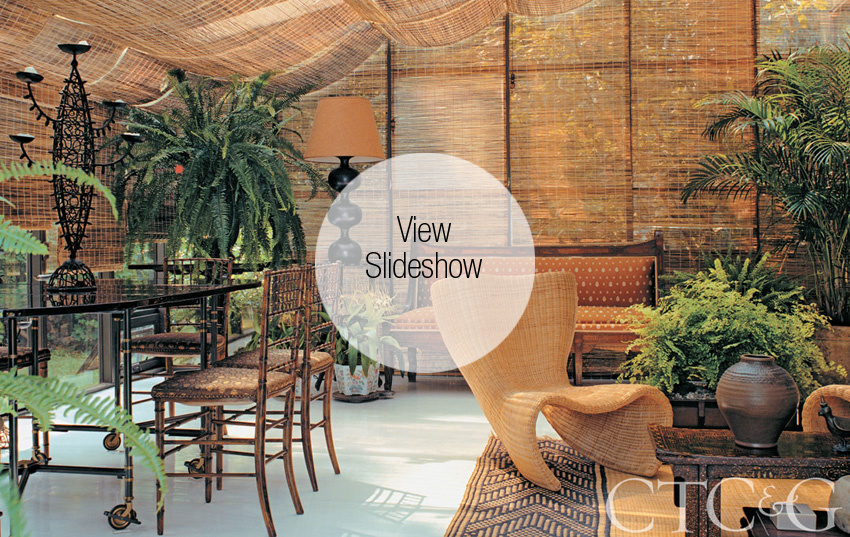 For my 40th birthday, by husband, Nuno, surprised me with two adjoining plots of land in Hampton Bays, overlooking Peconic Bay. The view was breathtaking, but the two houses on the property were dismal. Each one had distinct challenges to overcome. The main house was an angular modernist box from the 1970s, with a prefabricated glass structure tacked onto the side. The floors were an odd mix of marble and terra cotta, which I replaced with wood that I lacquered a high-gloss white. Instead of fighting the irregularly shaped walls, I accentuated their geometry by covering them with broad, bold stripes. As for the glass section, I hid the ugly aluminum framing behind split-bamboo shades and turned the whole thing into a greenhouse layered with plants and tropical blooms. On summer evenings we light candles and feel as if we are enjoying dinner in a rainforest.

The guesthouse, which is closer to the main road, was a dreary little shingled affair dating from the 1920s. It felt cramped inside, and dark. As with the main house, I approached these flaws as jumping-off points for my ideas, instead of as obstacles. It didn’t matter if the guesthouse was small and got no sun, because I turned it into a jewel box filled with warm interior light, the walls and ceilings completely lined with block-printed fabrics of my own design. The palette: a tropical one of fuchsia, acid green, lemon yellow and coffee brown. Instead of choosing just one color, I painted the staircase in a brilliant rainbow. The density of textures and the fabric-covered surfaces make the space feel cozy rather than claustrophobic. The low-ceilinged bedrooms are now womblike, and the fabric upholstery blocks out noise from the outside world. I love waking up here, because it is the place where I sleep most deeply.

No matter what the season, when you step inside the guesthouse it feels like a tropical escape. In the enclosed porch off the front, I placed two carved wood daybeds. I feel embraced by the positively seductive atmosphere, which puts me in mind of the room in which the young girl carries on a secret affair in The Lover, the film based on a tragic romance story written by Marguerite Duras. It takes place in colonial Vietnam, the country I grew up in, and the room the girl meets her lover in is filled with a dusky half-light that passes through wooden shutters, steps away from a noisy street in Cholong, the Chinese district of Saigon. The setting of the film resonates with me, with its scenes of jostling crowds, schoolgirls in white and fishing boats crowding the harbor. I still feel extremely close to the Vietnam I knew as a child, and the atmosphere of the guesthouse reflects this connection.

A version of this article appeared in the December 2011 issue of CTC&G (Connecticut Cottages & Gardens) with the headline: Tropical Punch.