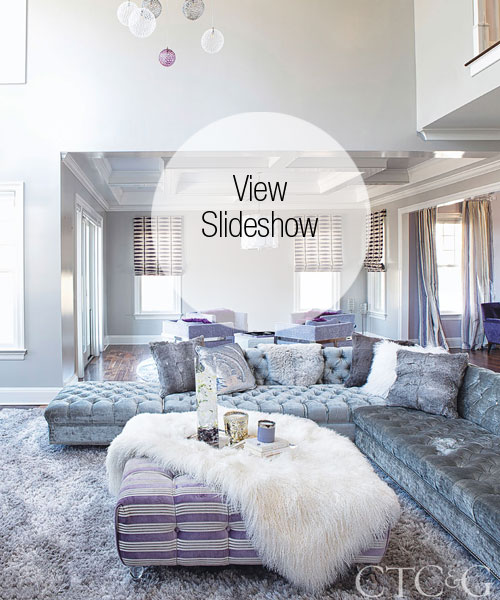 After taking up residence in her recently completed Farmington home, Lisa Nkonoki proudly dubbed her domicile the “Purple Palace at Poplar Hill on the Freedom Trail,” the latter referencing the town’s prominent role on the Underground Railroad. “The fact that slaves went through here makes this place sacred ground for me,” notes Nkonoki, herself a descendent of slaves. “I think my ancestors would be proud of what I have done here.”

From the street, it might appear Nkonoki has done little more than build yet another center hall Colonial in a neighborhood rife with similar architecture, but a distinctive purple front door hints otherwise. And once inside, the interiors, much like the homeowner, are upbeat and contemporary. “It’s sophisticated, classy and fun,” says Nkonoki, a prominent life coach whose website is peppered with portraits of her posing with notables like Norman Lear and Vice President Joe Biden.

Accordingly, her home needed to be a stylish setting for entertaining high profile clients and guests, but more importantly, it had to address Nkonoki’s role as matriarch of an extended family that includes nine grandchildren ages nine months to 12 years. Her desire to accommodate a never-ending series of play dates, tutoring sessions and family gatherings was paramount as was her desire to establish an aesthetic that was uniquely hers. “I got my first purple rug when I was 15, and I love my bling,” says Nkonoki, who turned to interior designer Laura Michaels to establish an ambience filled with royal hues and hints of sparkle.

Both the purple and the glitz are immediately evident upon entry thanks to 25 purple, silver and white handblown glass globes that cascade down from the 22-foot ceiling like balloons at a convention. From there, Michaels ran with that same palette but employed a measured hand when it came to the violet tones. “Lisa would have done everything purple, including the sinks and bathtub, so I moved her in the direction of using whites and grays with purple accents instead,” says the designer, who kicked things off with a luxurious gray velvet sectional in the family room large enough for all the grandkids to pile on for movie watching. “The gray on the sofa and the gray rug serve as grounding elements,” says Michaels, who added curly Tibetan lamb and Mermaid sequin pillows to establish the requisite glam elements.

Immediately adjacent, a quartet of chairs sporting violet jacquard cotton and an ivory hair-on-hide octagonal ottoman serve as a game center. “I wanted different areas to have distinct functions,” says the designer, who was mindful of the challenges of designing in an open floor plan. “Being able to see everything is wonderful, but it also means you have to be very careful about duplication and repetition, and putting another sofa in this area would have been boring.”

Not boring is the designer’s deft use of texture. “It’s a signature look of mine, and I love texture on top of texture on top of texture,” says Michaels, a former fashion designer. In the kitchen, her use of crocodile vinyl cabinet inserts with Ann Sacks iridescent tiles on the backsplash prevent the favorite family gathering spot from being just another white kitchen. And the point/counterpoint continues in the formal dining room where a sleek white lacquer table with Lucite legs meets chairs with lush purple velvet seat covers and backs.

On the upper level, the master suite exudes old-fashioned Hollywood glamour from the linen velvet headboard to the painted silver nightstand to the white shag carpet that just begs for bare feet. The tactile drumbeat continues with a bench wearing polyester designed to resemble crocodile and a lamp covered with longhaired goat fur. “I call it my ‘Cousin It’ lamp,” says Michaels, who also didn’t hesitate to bring on the bling. “Lisa loves shine and rhinestones, so there are rhinestone pulls on the vanity, and rhinestone tiles in the shower.”

For the homeowner, the conclusion was a happy one. “I love that when I come home it feels different every time,” says Nkonoki. “But it’s also calming and soothing enough that I can relax and enjoy myself.”

A version of this article appeared in the November 2016 issue of CTC&G (Connecticut Cottages & Gardens) with the headline: The Purple Palace.