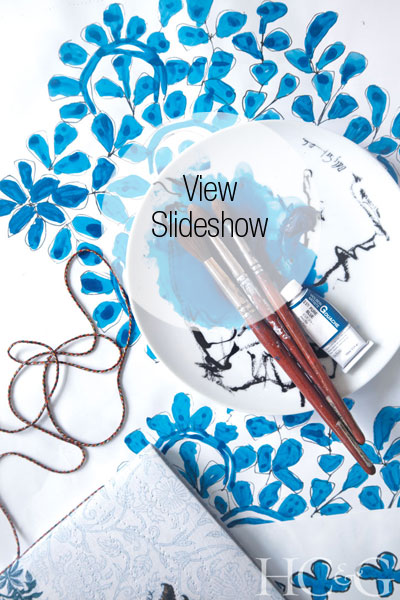 Even on an overcast day, light bounces off the furniture and objects in the living room of Madeline Weinrib’s 1970s contemporary. “I love this house because of the water and the light,” the painter and textile designer says of her 2,000-square-foot Bridgehampton rental, surveying its mix of mid-century furnishings, her trademark punchy, graphic pillows, antiques and treasures collected from trips around the world, and Daphne and Gemma—her beloved cavalier King Charles spaniels. “My house is similar to my artwork,” she adds. “When I’m designing a room, I feel as if I’m inside one of my paintings. I’ll test out the color red in one area, think, ‘That doesn’t work,’ and then try another color.”

In the wrong hands, such a trial-and-error approach to decorating might appear slapdash, but Weinrib’s painterly eye and sharp instincts—a Victorian-era horn chair in the living room looks positively artful paired with Hans Wegner’s 1953 Papa Bear chair and an ornate antique garden stool—always generate compelling tableaux. Weinrib’s house is “filled with things that took years to collect—they tell the story of my life,” she says, eyeing a pair of 1940s blue-and-green vases she recently found in Kütahya, Turkey. Prized hand-woven suzani and ikat textiles—those she purchases while traveling throughout rural Asia—also dot her home. “They’re handed down in women’s dowries, like diamonds and emeralds.”

Weinrib’s discerning taste is no doubt the result of a background rich in decorative tradition and a childhood spent among beautiful things. The granddaughter of ABC Carpet & Home founder Max Weinrib now finds it ironic that she is in the family business. “It certainly wasn’t my plan,” she says. Fifteen years ago, while pursuing a career as a painter, Weinrib was asked to design a collection of rugs for ABC. The rest is, well, history. At her brand-new atelier on lower Fifth Avenue, near ABC’s headquarters on Broadway, Weinrib is busy with bespoke projects, ranging from a one-of-a-kind carpet for the Brooklyn Academy of Music to collaborations with Argentinean fashion designer Soledad Twombly. Weinrib says that moving back and forth between New York City and the Hamptons brings energy to her artwork: “When I’m in either place, I feel creative, engaged. But in the Hamptons, I notice more, see more—even smell more.”

Favorite weekend activities include visiting Long Island galleries to collect artists like Keith Sonnier, Billy Sullivan, Sally Egbert, and Michelle Stewart, among others. “Viewing other artists’ work is a great way to see where you live through someone else’s eyes. I also enjoy having a dialogue with certain artists’ iconographies. Michelle captures nature in such a beautiful way, and Billy’s paintings of people lounging on the beach really interpret the zeitgeist.” And that’s saying something, coming from a woman who has visited more than 50 countries.

Lest one think that Weinrib’s careful curation extends only to decorative elements (“Homes aren’t really beautiful until the objects in them have history,” she opines), she is also an enthusiastic cook and entertains frequently, usually forgoing the Hamptons cocktail circuit. On most summer Saturdays she can be found enjoying intimate, uncomplicated meals at home with friends. In the morning she’ll collect fresh local ingredients at the farm stands, buying cheeses from Fairview Farm, just-off-the-stalk corn from Pike’s in Sagaponack, and homemade applesauce from Water Mill’s Milk Pail. It’s yet another way Weinrib indulges in the world that surrounds her: “We should all learn to become connoisseurs, not just consumers.”

A version of this article appeared in the July 1, 2012 issue of Hamptons Cottages & Gardens with the headline: The Magic of Madeline.