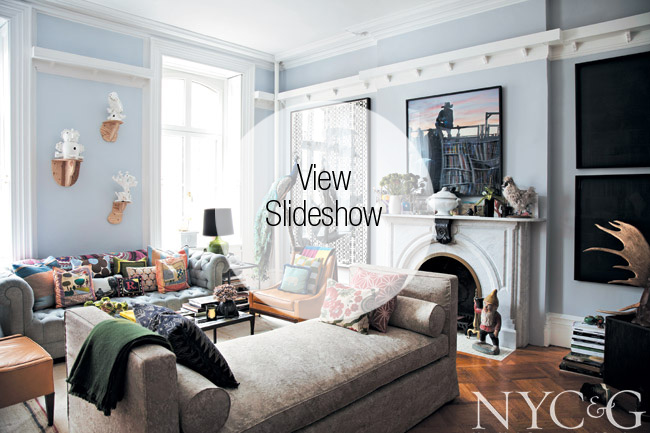 Two years ago, Rodman Primack, an Idaho native with a thriving career in the London art world, decided to leave his much-loved U.K. home and return to America to open RP Miller Design, a firm with its own textiles line and a portfolio of opulent residences from Tribeca to Hawaii. “I worked for Peter Marino early in my career and always wanted to be a decorator,” says Primack, who had done some informal design projects while he was a director at the Gagosian Gallery in Los Angeles. “But back then, it was more like a hobby.

Parting reluctantly from his luxurious 3,500-square-foot London home—a duplex apartment with a screening room, a rooftop terrace, a dining room, a library, and abundant closets—Primack consoled himself by downscaling fabulously to a one-bedroom apartment in the West Village, in addition to a 1930s getaway on the Venetian Causeway in Miami. “I love to move,” admits the 38-year-old, whose partner of 15 years is Rudy Weissenberg, a television producer and the senior vice-president of the Telemundo Network. “Most people who move a lot live lightly, but I don’t. I tell people that I’m like a gypsy, but with a container truck.”

The textiles, pillows, art, design, books, plants, and ephemera that Primack surrounds himself with in the West Village are gracefully, energetically layered, with an aura of the surreal about them. Like Primack, the arrangements convey wit, charm, and a capacity for taking risks that pay off—notably the six-foot-five taxidermy peacock in the sitting room. “We got him at Deyrolle in Paris and named him Francis,” says Primack. “We name everything.”

Francis presides over an unstudied mix that includes a 1960s Roger Capron cocktail table, a daybed and a Chesterfield sofa designed by Primack, a Rick Owens bench with an antler sprouting on one side, and three Jeffry Mitchell sculptures mounted on armatures with plywood brackets. “I’m always looking to create conversations among things that don’t necessarily come from the same place,” Primack says. The designer practices a similar alchemy in the bedroom, where a circa-2000 Nan Goldin photograph of a brooding Italian family is displayed above a mantel studded with a collection of sea sponges and near an Eames chair with felting by Mexican arist Tanya Aguiñiga. “I don’t like rooms that are uninterrupted and serene,” he adds. “I’m attracted to rooms that are more precarious. I’m okay with imperfection.”

A version of this article appeared in the May 2013 issue of New York Cottages & Gardens with the headline: Exotic Oasis.