Step Inside the Litchfield Home of an Essentialist Designer Couple 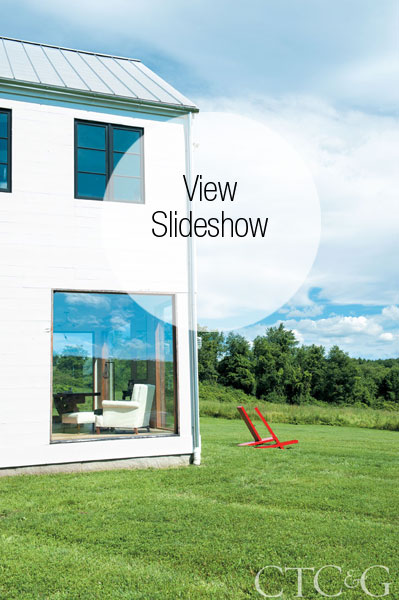 Ask Pilar Proffitt and Robert Bristow if they are minimalists, and the cofounders of the architectural design firm Poesis don’t so much distance themselves from the word as try to redefine it. “The term minimalist has gotten a little distorted and is too often associated with being cold,” says Bristow, who claims the word essentialist might be a more apt descriptor of who they are. “We try to get to the essence and soul of what we’re creating but still have it be fun, warm and interesting.”

In keeping with their philosophy, the 2,900-square-foot home they created for themselves (the duo married in 1997) on 11 bucolic acres in Litchfield County is a direct and honest interpretation of that enduring iconic structure, the barn. For inspiration, the couple didn’t need to look beyond their property’s existing buildings: an 1880s farmhouse, two long barns and a pair of silos. With temporary living quarters established in the two-bedroom farmhouse and child number three on the way, Proffitt and Bristow quickly got down to business. After a host of considerations, including additions to the existing house and barn conversions, they came back to the same conclusion. “The new structure needed to form a ‘T’ at the end of the barn and be something authentic and elemental to both the site and rural area,” Bristow says.

Working hand in glove (he’s “the master of material and process,” she’s “the space and the feel”), they designed the envelope, all the furnishings, and every detail in between. Dubbing their holistic process, “the whole house concept,” the integrated approach ultimately transformed their business model. “We learned this was how we wanted to design houses for our clients in the future,” says Proffitt.

With plans for a classic wood-frame structure with a gable metal roof in hand, the couple sought contractor bids only to discover their dream home was out of their price range. Rather than go back to the drawing board, they approached a modular company about providing the framework, and this time the price was right. “Instead of hiring a builder, our house was built to our specifications in five days by 120 people in a factory. It arrived on site in what resembled four trailer-sized shoe boxes wrapped in waterproof Typar paper,” explains Proffitt. “They provided the shell and we hired subs for the floors, windows and everything else.”

Inside, the open floor plan is organized around a commanding two-sided curbstone (the same stuff you see on city streets) fireplace that separates the living room and kitchen but also has a second, less obvious purpose. “It’s something for the kids to run around,” says Bristow, noting their two daughters, ages nine and twelve, and their six-year-old son spend time doing just that. “It’s important to include elements that aren’t just for function but for play as well.”

Similar to the fireplace, materials such as the untreated white oak plank floors were selected with a sense of permanence in mind. “They will show the marks of time, get better with age and not require refinishing every few years,” says Bristow. “You save a lot of trees and resources by doing things right in the first place.”

Their furniture designs have a similar enduring quality, like the round white oak kitchen table with a marble top that serves as the hub of their family life, and the substantial walnut bed that grounds the master bedroom. But the husband and wife team doesn’t collaborate on everything, and according to Bristow, that’s a good thing. “I can get too heavy and plodding and need something lighter and finer to balance my designs. That’s where Pilar comes in,” he says, pointing to his dining room table anchored by a heavy pine base with steel rods as an example. “Pilar responded to that with a light console table fashioned from a web of raw steel, and it’s just what the room needed.”

“It’s what’s interesting about working as a couple,” adds Proffitt. “We each have different strengths and we balance each other out.”

A version of this article appeared in the October 2012 issue of CTC&G (Connecticut Cottages & Gardens) with the headline: Essentially Speaking.