Step Inside the Masterful Amagansett Retreat of Architect Paul Masi 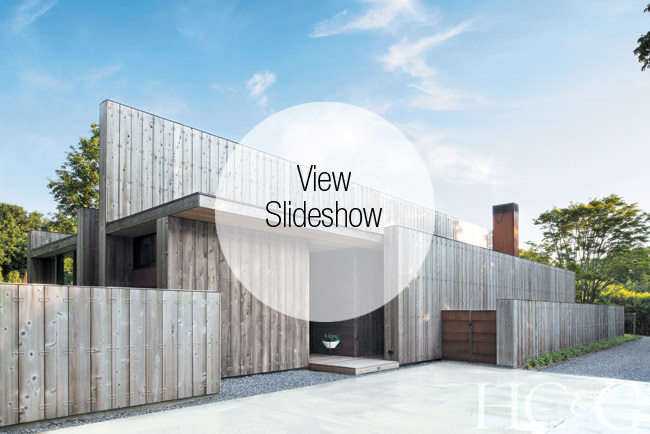 Harry Bates has been designing houses on Long Island since the early 1960s. Back then, the choice of materials was limited to “whatever you could get at the lumberyard,” says Bates, explaining the modesty of his early dwellings. But he still found ways to give his houses handsomely proportioned spaces, with crisp details that reflected serious architectural ambitions. His goal was always to do more with less.

That’s why his houses are “still relevant today,” says Paul Masi, who is Bates’s partner in the Sag Harbor firm Bates Masi + Architects. So what if their age difference is more than 45 years? Though Bates “founded the firm before I was born,” says Masi, who is 43, the two men share a sensibility. Today, when there are thousands of choices for every component of a house, it’s important to come up with a few organizing ideas and stick to them. “The architect’s job,” Masi explains, “is to edit.”

Masi put this philosophy to work when he designed a house for his own family, which includes his wife, Liz, and their three school-age children. The site was a tricky one: The Masis wanted a house in town—specifically, in Amagansett—for proximity to schools and other amenities. But the building lot that worked best, location-wise, was just a few hundred feet south of Route 27. In that spot, the sound of cars whizzing by could have been a problem.

Like any good architect, Masi found a solution. He began by putting the 3,200-square-foot house behind windowless concrete walls, which bounce sound off the property. Utilitarian? Not at all. The walls are sheathed in planks of weathered cedar, giving them a welcome softness and tying them to local vernacular architecture. But there’s a twist: The cedar planks are held in place by custom-designed stainless-steel clips that Masi employed throughout the house, creating an admirable consistency from outdoors to indoors, from room to room, and even from walls to fixtures.

Inside, much of the ground floor, save for the master suite and a guest room, is one continuous space: a living/dining area with an open kitchen centered on a 22-foot-long island. The oak flooring is just four inches above grade, so when the massive sliding doors are open to their full width of 34 feet—as they are nearly all the time in warm weather—the interior spaces and the rectangular yard become a single enclosed area. That’s perfect for the Masis, who are more likely to be found hanging out in the bluestone-trimmed pool than on the sofa. But when they do want to huddle in front of the TV, a cozy den with built-in furniture awaits.

Upstairs are three bedrooms for the children and a shared bathroom with three sinks and three mirrors. Connecting the two floors, and set against a wall of weathered steel, is a stairway that is itself an attraction: Each wooden tread is slightly thinner than the one below it, which means that, as people ascend, the sound of their footsteps rises with them.

Masi was born in Manhattan but spent much of his childhood at his family’s weekend house in Montauk. After studying architecture at Harvard’s Graduate School of Design and apprenticing for Richard Meier, he took a summer off to surf. That’s when he was introduced to Harry Bates, a Southerner who had worked for Skidmore, Owings & Merrill before establishing his own firm on the East End. The two men hit it off and still collaborate closely on projects—as they did on Masi’s house. “I’ve learned enormous amounts from Harry,” says the junior partner. “I don’t think this house would be this house if it weren’t for our relationship.”

A version of this article appeared in the August 15 2015 issue of Hamptons Cottages & Gardens with the headline: Masi to the Max.