Step Inside the Serene Marrakech Home of Designer Cassandra Karinsky 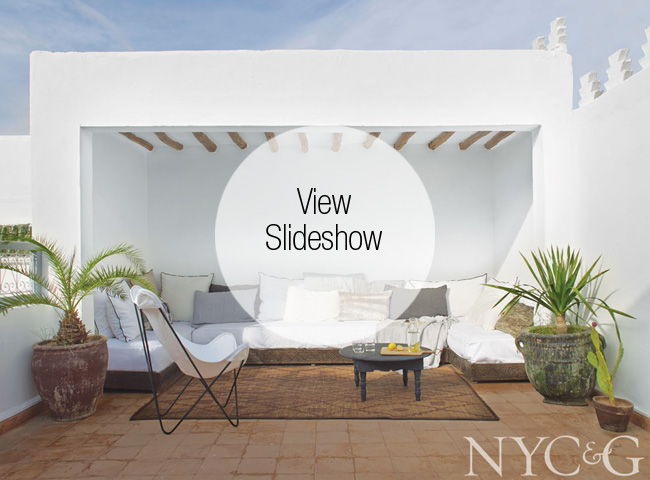 When Cassandra Karinsky first visited Marrakech, in 1996, she was in the restaurant game, managing and consulting in Chicago. The job later took her to New York, Sydney, and Ibiza to work with internationally recognized names like Tetsuya, Bill Granger, Longrain, and Les Halles. But Morocco’s otherworldliness, like a memorable meal, stayed with her long after that first taste nearly two decades ago.

“It’s the energy here, and the colors,” she explains. “And the local artisans are so inspiring. Marrakech has always been a creative hub, as well as a magnet for expats—you never know who you’re going to bump into.” In 2005, she decided to join the tide and move to the city, fully immersing herself in Marrakech’s magic.

At the beginning, Karinsky sold private-label kaftans, a venture that did especially well once Gwyneth Paltrow blogged about them, landing Karinsky on the must-see list of every fashion-conscious traveler to Marrakech. Her current enterprise is Kulchi, which means “everything” in Arabic. Karinsky’s interpretation of the phrase translates to a medina showroom where she displays and sells a range of Moroccan rugs and prints, curated for stylish tastemakers around the globe.

Home for Karinsky—who also has decorating clients in New York and her native Sydney, where she maintains another Kulchi showroom—is a bright-white two-bedroom apartment in Guéliz, the “new city” adjacent to ancient Marrakech. “After a day trekking through Marrakech’s souk, with all its dust and noise, I needed a place that was calm,” she says. “And I admit it—I’ve done the Moroccan tea-stool thing. I’ve lived with cushions strewn on the floor and all that, but after a few years here I just wanted to have my own identity, a place that was me, rather than a place that screams, ‘Hey, look at me, here at home in Marrakech!’”

Karinsky’s cool, white epoxy floors are not just soothing to the eye, they also give definition to what’s on display, from classic 1960s Bertoia diamond chairs to more obtuse remnants from Morocco’s colonial past, such as the four-pronged brass floor lamp in her bedroom, which she found while trolling the stalls at the Bab el Khemis flea market.

Like any ex-patriot parked in a popular travel destination, Karinsky routinely receives visitors from overseas, which explains the hulking table in the middle of the airy apartment. “I recently had 15 girls here for a friend’s 50th birthday,” she says. “I love to entertain, so a big table was a no-brainer. But I also wanted a place where I could spread stuff out and work, and get through everything that needs to be done.”

An eclectic collection of art on the walls represents important associations and connections in her life. Among the visual touchstones are works by artist and designer Dina Broadhurst, a friend from Sydney; her brother, painter Alexander Karinsky; and New York fashion photographer Randall Bachner, who also happens to be a Marrakech neighbor. “I have an open-door policy here—it’s like Melrose Place on rue du Mosque,” Karinsky says with a laugh. “Randall comes over, and we share a Negroni on the rooftop terrace every sunset. My friend Kamal, one of Marrakech’s biggest restaurant entrepreneurs, lives upstairs, and I’m always visiting. It’s a great community of interesting, creative people.”

When she’s not at home or in the souk, Karinsky makes frequent forays into the Atlas Mountains to search for tribal treasures, and although that might sound like an adventure, there are two Kulchi showrooms to keep stocked, and it’s not all about long conversations over pots of sweet green tea in the clean mountain air. “The roads are bumpy and windy, and I sleep in villagers’ homes, where the shower is a hose coming out of a wall,” she says. “And the loo—I mean, best not to think about that. When I get home, I just want to curl up in my cocoon and sleep for a week. Here, I can look at the pink rose city from my terrace and really appreciate it. Marrakech is intense, and it was important to me to live somewhere that doesn’t even look like it’s in Marrakech. Well, maybe just a little.”

A version of this article appeared in the December/January 2016 issue of New York Cottages & Gardens with the headline: Marrakech Express.